Fans of Pokemon will soon be able to look forward to a whole new way to duke it out with their favourite pocket monsters. Pokken Tournament, a collaboration between Nintendo and Bandai Namco, has already been enjoying plenty of face time in Japanese arcades since last Summer, and soon, those of us in the West will get a chance to enjoy the Tekken-inspired fighting game, when its home console port arrives on Wii U. 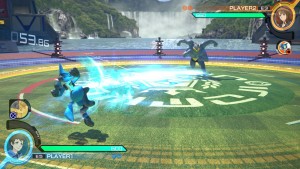 Now, Wii U owners in North America and Europe know when to expect the fighter, since it releases in both territories on March 18th, the same day that the game’s Wii U port will launch in Japan as well. The West won’t be getting the arcade version of Pokken Tournament, but that’s fine, since the Wii U version will sport some exclusive extras, including entire fighters that aren’t available to play in the game’s arcade build, such as the recently-announced Braixen and Garchomp. A non-shadow version of Mewtwo will also apparently only be offered in the Wii U build of the game, with Shadow Mewtwo, the game’s big boss character, being made available to access right away for pre-ordering customers and those who buy first-run copies at retail, free of charge, via a special Shadow Mewtwo Amiibo card. Everyone else will have to unlock Shadow Mewtwo through gameplay.

While it obviously won’t feature the full roster of Pokemon critters, Pokken Tournament will allow players to engage one another in one-on-one fisticuffs combat, in 2D fighter gameplay. The game will feature iconic Pokemon series faces like Pikachu, Charizard and Lucario amongst its playable roster, alongside fighter-friendly additions like Weavile, Machamp and Gardevoir, with Chandelure being confirmed as the game’s most recent addition. Pokken Tournament is also one of several Pokemon games planned for this year, to observe the Pokemon franchise’s 20th anniversary.

Keep catching Eggplante for all news and updates on Pokken Tournament, and other big developments in the Pokemon game franchise.