The Flash kicked off its 2016 run with a standout midseason premiere in, “Potential Energy”, an episode that could be Season Two’s best yet in many respects! Between a riveting villain-of-the-week, lots of emotional heft between the Barry/Patty relationship and the West family’s new batch of drama, and even some very cool teases for what’s to come with Wells and Jay especially, it feels like the show is entering the back portion of Season Two on a stronger note than ever!

Things begin with Barry starting to have nightmares about Zoom killing Patty, which he’s unable to confide in Patty about, due to Patty not knowing that Barry is The Flash. After talking to Iris and the S.T.A.R. Labs crew, Barry decides to resolve to tell Patty about his secret superhero identity, though Wells warns against it, referencing the taking of Jesse as one of several ‘worst case’ scenarios that Barry would have to look forward to with Patty. Barry’s mind is made up however, and he prepares to tell Patty the truth, while also keeping an eye on the latest metahuman threat to Central City.

Said threat comes in the form of The Turtle, a longstanding minor foe of The Flash that dates all the way back to the Silver Age comics of the 1950’s. The Turtle is the latest n’er-do-well to be given superpowers by the Particle Accelerator explosion, and has the ability to drastically slow down time by drawing all of the nearby kinetic energy of people into himself, thus leaving everyone in a temporary state of potential energy, hence the name of the episode. Despite The Turtle beginning his comic book career as a goofy mischief-maker with no powers, this portrayal of the character falls more in line with his recent re-introduction into DC Comics lore, and it makes him an effective villain-of-the-week that is interesting, terrifying and innovative, since even Barry’s speed won’t help him against a criminal of this caliber.

It was neat to have the episode reveal that Cisco is studying mysterious incidents that he believes are connected to unidentified metahumans, Chloe Sullivan-style, and that The Turtle has been operating unchecked in Central City, since his powers mask any human involvement in the mysterious disappearances of people’s personal effects right out of their hands. The motivations of The Turtle were also quite refreshing, in that he steals personal effects of great sentimental value and hoards them, believing that people take too many things for granted, a mental collapse that took place when The Turtle’s wife attempted to leave him, leading to The Turtle keeping her in a state of frozen time.

This all made for an unsettling and especially disturbing baddie, and one of the best one-off metahumans that The Flash has featured in a while. Yes, he sadly appears to die at the end of the episode, with Wells violently stealing brain matter from him, which seems to kill him, allowing Wells to try and reverse-engineer The Turtle’s powers to try and slow down Zoom. The monologue of Wells’ dark side related to an innocent disappearance of Jesse some years back was also effectively ominous on this note, suggesting that the Earth-Two Wells has a dark side all his own, even without Eobard Thawne stealing his genes.

Oh, and speaking of Eobard Thawne, he’s back! The episode ends with none other than the Reverse-Flash running back to the present, then asking Gideon where the hell he is. Is it the Earth-Two Thawne? Probably, though I suppose we’ll have to wait and see.

As great as the battle against The Turtle was, plus the big tease of Reverse-Flash’s return, this episode also packed in a lot of highly satisfying emotion and drama, with Patty seeming to finally lose patience with Barry’s inability to open up to her. Right as Barry prepares to tell Patty the truth about his identity as The Flash, The Turtle intervenes and nearly kills her, leading to an ugly situation where it appears that Barry ditched Patty, and seemingly left her to die. The ups and downs between Barry and Patty made for lots of unpredictable and heart-wrenching story material, especially when this all culminates in Patty telling Barry that she’s leaving Central City, to take up a university career in Midway City. The end of the Barry/Patty relationship came very suddenly, and happened despite all of Barry’s best efforts, and that made it an especially dramatic turn that was executed incredibly well, as sad as it is to see Barry lose his latest cool girlfriend.

The material with the West family also turned out very well, especially when we see that Wally definitely isn’t the perfect son or brother. After he fails to show up at a family dinner, and is caught street racing by Detective West, it looked like a situation where Wally is a reprehensible, ungrateful son, only for it to soon after come out that Wally is doing illegal racing because it’s the only way to raise money for his mother’s hospital bills. It was good of the show to give Wally a morally ambiguous edge, but still make him sympathetic, and Detective West’s maturity was very admirable, when he admitted that he got too caught up in trying to be a father to his lost son, and doesn’t yet have a place with him. Despite Wally appearing to leave Central City after his latest big race, it was satisfying to see him and West prepare to share a meal, suggesting that there is hope for the two after all, and maybe Wally may yet be able to join the rest of the West family unit in Central City.

The last big bomb was dropped towards the end of the episode, when Caitlin runs a test on Jay’s DNA, and learns that he’s sick, and quite likely dying. Apparently, losing his speed has left Jay in dire straits, though he appears to have given up on a cure. Caitlin’s resolve motivates him to keep at it however, and ultimately brings them closer together. The way that this tightening of Caitlin’s relationship came after Barry’s fell apart was effectively emotional as well. 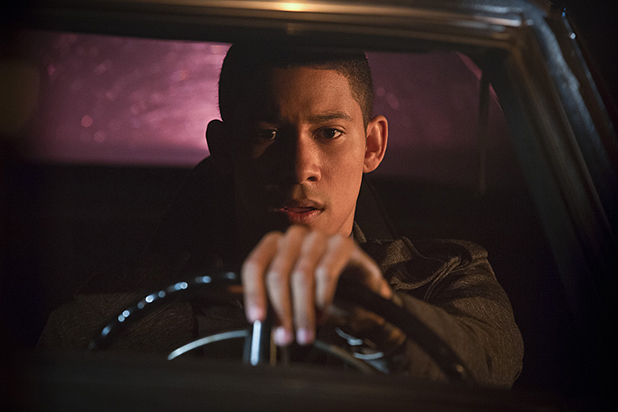 “Potential Energy” served as a fantastic way for The Flash to kick off 2016, delivering a very effective, character-focused episode that presented some big new developments with Barry, Jay, Wells and the West family, and even managed to turn out an unusually great villain-of-the-week to boot. Even with Zoom’s whereabouts still unknown for now, the return of the Reverse-Flash will no doubt present a fresh batch of problems, especially when we see that the Earth-Two Wells still isn’t above even murder when it comes to pursuing an agenda!

The Flash 2.10: "Potential Energy" Review
The Flash started 2016 on an excellent note in its midseason premiere, delivering a tight focus on strong character development within the Barry/Patty relationship, along with Wells and the West family, while rounding things off with one of the best villains-of-the-week to come along in a while!
THE GOOD STUFF
2016-01-22
96%Overall Score
Reader Rating: (0 Votes)
0%