Peralta’s well-meaning, but ultimately ineffectual plans to liven up Captain Holt’s life once again come to a pretty ridiculous head in “9 Days”, a very funny episode that makes some pretty amusing use of the entire lead cast.

The core plot of the episode involves Peralta deciding that Holt has become too depressed after his husband has left for France, so he decides to dig up an old case file, and pretend it’s been re-activated. Holt initially seems enthusiastic about the opportunity, and the chance to see Holt and Peralta work together again feels like its own reward to start… Until the two come into contact with a suspect that ends up having Mumps! 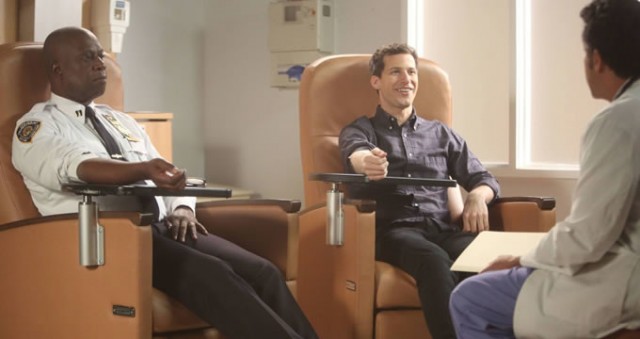 Quarantined together for nine days, with Santiago caring for the both of them (apparently, her shots are so advanced that she’s immune to things no one has even heard of!), Peralta and Holt are thus left to stubbornly try and solve their case, even as a delirious fever overtakes them. Herein lies a literal onslaught of hilarious gags, with Peralta and Holt’s normally brilliant minds now reduced to mush together, and yet, their stubborn drive to succeed at their work still doesn’t quit. Despite these two normally being frenemies in the precinct, the way that they seemed to bond and get along better than ever thanks to their shared pain was very amusing as well.

Many of the episode’s best jokes spawned from this simple setup, especially as Santiago points out exactly how delirious the two are, without them realizing it. Things like the two men trying to futily exit the house while wearing Winter gear and surgical masks that they think works as a biohazard suit, to Holt simply writing the word, “Case” on the window constantly, then spelling it with a, “K” after a while, are great laugh-out-loud moments. Seeing both Holt and Peralta name their facial lumps is also pretty funny too, making it almost disappointing when Santiago accidentally discovers a vital clue in a fake recipe, and the two make a full recovery. At least Peralta got to reward himself with the delightful agony of sour candy though.

Back at the precinct, a duo of subplots unfold, both of which are quite humourous themselves. Jeffords is made acting captain while Holt has Mumps, to start, and decides to take the initiative of doing all of the menial tasks that Holt never had time for. This goes about as well as anticipated, with Jeffords eventually getting fed up and slamming the door to the captain’s room, resulting in pretty much the entire room instantly falling apart. As usual, it’s Gina that saves the day afterward (how exactly did that room get fixed so fast?), reminding Jeffords that a captain is always putting out too many fires to sweat the small stuff. Gina’s usual sexual tension with Jeffords also wins the day as well, with Gina amusingly telling Jeffords that the thing that separates him from Holt most of all is that Holt can’t destroy a room by slamming the door.

The other subplot primarily involves Boyle, whose dog recently passed away, leading to him refusing to do his work. It was a bit of a stretch to have Boyle entirely blow off his workload over a dog, but that’s a minor issue. Regardless, this greatly annoys Diaz, who tries her best to console Boyle, despite Boyle never becoming more productive or happy. Diaz even gets Boyle a new puppy, only to have Boyle turn his nose at it, leading to Diaz having to keep the puppy for herself. This leads to a change of heart for Diaz, who now respects Boyle’s pain, and even sweetly has a funeral for the dog with Scully, Hitchcock, Gina and Jeffords in the conference room, and invites Boyle to participate. Apparently, the puppy warmed Diaz’s heart and turned her on to dogs, which is very sweet, and the Diaz-worthy twist of her eulogy saying that if anything happened to her new puppy, she’d kill everyone in that room as well as herself, was one of the episode’s biggest laughs, easily, especially when Gina praised Diaz’s, “Violent” eulogy. 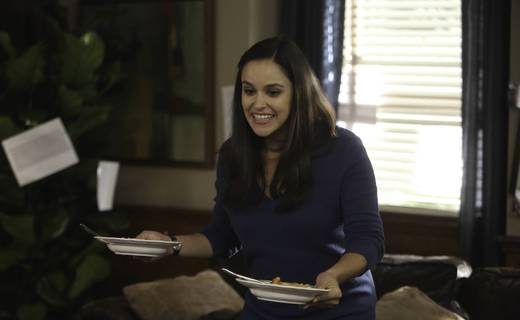 “9 Days” had a fantastic mix of new scenarios and reliable precinct shenanigans for Brooklyn Nine-Nine, and the result was a very funny and highly satisfying episode overall. The pairings were inspired, the humour was top-notch, and the concepts behind each storyline were very sound. Even better is that this episode was very charming, and had lots of sweet little moments, whether it was Diaz embracing a new puppy, or Holt learning to move past his pride and admit that the temporary loss of his husband is getting him down. The show is continuing to do very well in its new Tuesday slot, and it’s great to see that the laughs still come freely, even after the show’s expulsion from FOX’s Sunday night comedy bloc.