Agent Carter is back! Despite initially being billed as a miniseries, Agent Carter is returning with a new ‘season’ of ten episodes, which bring Peggy to the exotic new location of Los Angeles, circa 1947. As with Season One, two back-to-back premiere episodes are kicking off Season Two, starting with, “The Lady in the Lake”, which picks up about six months after the conclusion of the show’s first season.

The show really hits the ground running in terms of pacing and fun factor once again in its new season, which is great to see. A strong opening sees the SSR, now led by Chad Michael Murray’s Jack Thompson, apprehending Dottie Underwood, cutely disguised in Peggy’s old Season One business suit and hat, during a bank robbery that’s actually an undercover sting operation. There’s not much time for Peggy to interrogate Dottie though, as Daniel Sousa, now chief of a new Los Angeles-based branch of the SSR, has to call in a favour when a woman’s body is discovered in a lake that’s been frozen, on the hottest day of the year for L.A. no less!

Thompson takes the opportunity to send Peggy over to the West Coast, believing he can interrogate Dottie himself. This sets the second season of Agent Carter properly into motion, as Peggy reunites with Edwin Jarvis, after he and his wife moved to L.A. with Howard Stark after Stark decided to start a movie studio, and quickly sees what she’s up against. Not only is the dead woman’s body completely frozen, even beyond the surface, but it emits an eerie glow when the lights are turned off.

If you’re an avid Marvel fan, you’ll no doubt recognize what’s happened to the woman, as she’s clearly come into contact with Darkforce, a fictional, extra-dimensional substance from Marvel Comics lore. The addition of Darkforce creates a more supernatural adventure for Peggy in contrast to the first season, and it enhances the overarching mystery with novelty, and a more distinct Marvel flavouring, while also being a small callback to the first season of Agents of S.H.I.E.L.D., which featured Darkforce-manipulating Marvel villain, Blackout in one episode. The presence of Darkforce also seems to be another way for Marvel to start laying the groundwork for this November’s Marvel Studios movie release, Doctor Strange, after Captain America: The Winter Soldier and Ant-Man set about on their own teases for the coming of the Sorcerer Supreme to the Marvel Cinematic Universe.

Frankly, the second season of Agent Carter has a more comic book-style flavouring overall, in contrast to the more emotional and grounded first season. Right from the moment Peggy arrives in L.A., and greets Jarvis while he’s transporting a difficult flamingo for Howard Stark, you’ll get the sense that the show is a lot more light-hearted now. It still had a sense of light-hearted charm in the first season, but that’s definitely been cranked up in the second, with this first episode being chock full of silly humour, and zippy, romanticized dialogue. It might be a bit much for some viewers, but if you’re willing to embrace the more fun and liberated direction, Agent Carter is as entertaining as ever to watch here!

In any case, Peggy and Sousa, along with a homicide detective that identifies the dead woman as a victim of a serial killer called the Lady of the Lake Killer, sniffs around a Particle Accelerator in Pasadena, where they believe the woman was lethally exposed to the mysterious substance. Peggy meets a charming scientist, Doctor Wilkes, who is willing to feed her information (after demonstrating a miraculous wine machine, of course), just before the group is kicked out. It’s also around this time that the medical examiner is shattered and killed after being frozen himself, while performing the autopsy.

The fast-paced storyline also finds a way to work in a senator hopeful who happens to be married to an actress named Whitney Frost, whom you might remember from Tales of Suspense, according to Jarvis. Hardy har, Marvel. Yes, if you’re a Marvel fan, you’ll recognize the name, as it belongs to Iron Man nemesis, Madame Masque in Marvel Comics lore, though there’s no sign of Whitney’s super-villain heritage on Agent Carter at this point. Her husband seems to be more suspicious, as he was having an affair with the dead woman, but the lead turns up a dead end.

After a return to the Particle Accelerator facility however, the homicide detective strangely kidnaps Wilkes, and punches out Jarvis in the process, forcing Peggy and Sousa to give chase. Turns out, the detective is crooked, and was paid off by the facility to dispose of the woman’s body, faking the Lady of the Lake Killer presence in the process, which is what is leading to him gradually being consumed by Darkforce himself. Peggy and Sousa manage to corner him, though a rookie cop shoots the detective and shatters him, before any real information can come out. Bummer.

At this point, it feels like the episode needs to set a lot of gears in motion, for what’s clearly a large-scale plot. Turns out, the cop was paid off by Whitney’s husband to kill the detective before he talked to Peggy and Sousa, with Whitney herself appearing to be pulling the strings (of course), while Peggy tries to get Sousa out for a drink, only to learn that he has a new woman in his life. Honestly, that’s a little quick, don’t you think? The episode itself even points out that Sousa has had no free time since starting the L.A. branch of the SSR. So, how exactly did he meet a woman and fall in love, so soon after seeming to profess his love for Peggy? This was the only part of the episode that felt needlessly contrived, though it’s also possible that Sousa’s new romance won’t last in the end.

On a better note, there were some standout new arcs for the supporting cast in this premiere as well. We finally meet Jarvis’ wife, Ana Jarvis for example, who, surprisingly, is a witty, carefree woman who also embraces Peggy’s sense of adventure. That’s not at all the impression she gave off-screen from the first season, but this nonetheless makes the character of Jarvis more interesting, suggesting that he’s the one so tightly-wound, and simply paranoid about being good enough for his wife, rather than getting in trouble with her. Ana already appears to be one of the show’s best new characters, and I’m really looking forward to seeing more of her.

It’s also good to see that Agent Carter doesn’t simply forget about Dottie either, as she sits back in SSR custody, with Thompson predictably failing to get far with her, particularly due to Dottie’s obsession with Peggy, and only talking to Peggy. A squad of FBI agents nonetheless ends up taking Dottie away in the end though, led by Kurtwood Smith’s War Department head, Vernon Masters, who also happens to be Thompson’s mentor. The presence of Masters presents two promising teases for the remainder of the season, with the first being the increasing obsolescence of the SSR (which Marvel Cinematic Universe regulars already know leads to the formation of S.H.I.E.L.D.), and the second being a higher interest in Dottie, suggesting that Peggy could be being taken away from an even bigger threat by being in L.A. 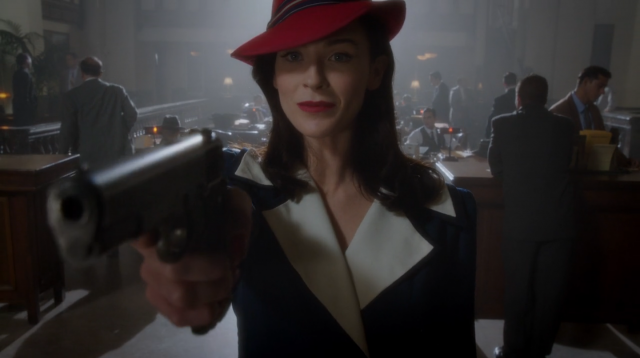 While it’s a lot more light and fluffy than the weightier first season so far, Agent Carter’s second season is off to an entertaining start with, “The Lady in the Lake.” Once again, the story is quickly set in motion for the miniature count of ten episodes, setting up a fun over-arching mystery with Darkforce and Whitney Frost, and even presenting some interesting developments back in New York with Dottie and the SSR, despite Peggy’s absence. Given the increased scale and heightened fun factor, this seems to be a good sign of the show’s second season being at least more spectacular and fun, and not simply recycling the same conflict from the first season, only with a change in setting.

Agent Carter 2.1: "The Lady in the Lake" Review
Agent Carter's second season kicks off with a light-hearted, fantastical new mystery, as Peggy goes to L.A. to solve a supernatural murder with Sousa, which mostly gets off to a fun, zippy start in the premiere episode.
THE GOOD STUFF
THE NOT-SO-GOOD STUFF
2016-01-24
80%Overall Score
Reader Rating: (0 Votes)
0%