Arrow definitely ended its 2015 run on a harrowing cliffhanger during midseason finale, “Dark Waters.” With Oliver barely surviving getting his limo shot up by the Ghosts, and Felicity sustaining what could have been fatal gunshot wounds, it looks like that mystery death might be coming sooner than expected for Season Four. The episode didn’t waste time capitalizing on that either, as an action-packed cutting of scenes showed Oliver taking to the streets and beating on several Ghosts in a fit of rage, desperate for any semblance of information on Damien Darhk’s whereabouts, while Felicity was also rushed into the emergency room, in critical condition.

Then again, if you’ve been watching Arrow since the beginning, then you, like me, probably had a feeling that this was a big old troll from The CW and DC, with even the marketing seeming to be very on-the-nose about Felicity apparently dying in the midseason premiere. As I and others suspected however, this was all a ruse. Felicity survived the bullets, and will live to keep fighting for Team Arrow. Moreover, the episode states that the oft-teased death will occur in four months of the show’s time, likely shortly before, or on, the Season Four finale. If you’re still not sure about Felicity’s fate even then, the flash-forward ends with Oliver entering a nearby car after walking away from the grave, and Felicity is waiting in the car for him, urging him to kill some unspecified, “Son-of-a-bitch.” There we have it then. Felicity will not be the one to die this season, so her fan following can relax. 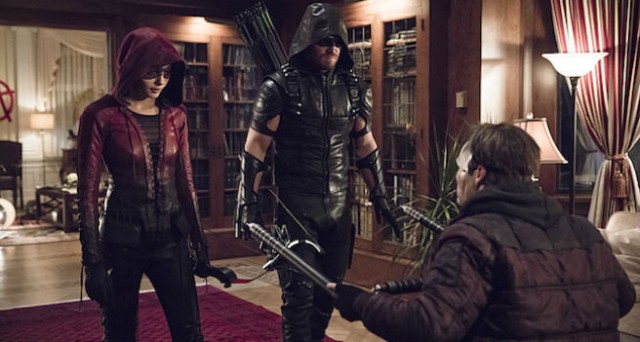 There is still a consequence to the attack though, as Felicity is initially in critical condition, then becomes stable, though then, Donna Smoak confirms to Oliver that she’s permanently paralyzed from the waist down, and will never walk again. This seems to complete her transformation into The CW’s variation of Oracle for their DC Television Universe, the wheelchair-bound, computer-savvy sidekick to Batman in DC Comics lore. Batman doesn’t seem to exist in the DC Television Universe at this point, or if he does, this DC Universe at large doesn’t seem to be aware of him. Thus, I suppose that Oracle is fair game for Green Arrow in this case, as Ra’s Al Ghul was last season, since it would obviously be unfeasible to use her in FOX’s competing Batman-themed DC Comics drama, Gotham.

With the question of Felicity’s fate answered then, how did the rest of “Blood Debts” fare? Well, for the most part, it’s decent, though certainly not the season’s best episode. While the character drama was generally well done, and the emotionally charged storyline generally worked as a nicely intense way to address the attack on Felicity and its fallout, some of the character decisions and motivations were a bit questionable. Likewise, while the action was good, most of the episode felt like it was trying to find ways to drag out the Oliver/Darhk conflict, unceremoniously tossing Anarky into proceedings as a way to perpetually distract Team Arrow from the real threat.

Anarky is yet another Batman personality that seems to be hanging out on Arrow, simply because he wouldn’t fit in to Gotham. On paper, his portrayal here is great, and he’s a nicely scary and unpredictable baddie, albeit one that’s still growing into his full-fledged Anarky personality from DC Comics, since he still has little in common with his inspiration from the printed panels. That said however, to be frank, this feels like the wrong time to introduce Anarky again. The stakes are too high with the Damien Darhk battle at present, and rather than come off as an interesting new challenge, Anarky came off as an annoying distraction. It’s cool to see how devious he is, and how he can hold his own against even the combined efforts of Oliver and Thea in a fight, but he should have come along after the heat from the attack on Oliver and Felicity had died down.

Making matters worse is that the episode also tries to incorporate a subplot with Thea, which feels too disconnected from everything else. Anarky constantly tries to poke at Thea and her anger issues, taunting her to kill him, and clearly taking inspiration from Heath Ledger’s Joker from The Dark Knight in that respect. Thea even temporarily dumps Alex due to Anarky’s torment, only to get back together with him barely a few minutes later. What was the point of that?!

I’m getting the impression that the show is trying to position Anarky as a big villain for a hopeful Season Five, especially since he gets away at the end of the episode, largely because Oliver set him loose to find Darhk, even when Laurel goes over Oliver’s head to sic the SCPD on Anarky. This idea to make Anarky a monster that Oliver created, even more so than Deathstroke, would be a cool setup for Season Five, granted, if Oliver’s grief and rage over Darhk has him go to the extremes of unleashing an unstoppable, violent sociopath to take Darhk down, a deadly criminal that Oliver can no longer control by next season, but if that’s the next phase of Anarky’s character, the show probably should have held off on setting this into motion for a few episodes, at least.

In fact, it was sort of surprising to see how little Darhk ultimately played into the episode. Even when Lance tells Oliver the location of Darhk’s lair, Darhk splits before Oliver gets there, leaving the Ghosts that are stationed at the lair to be killed by Anarky. Darhk doesn’t properly show up again until the end of the episode, when Anarky holds his family hostage, though after a brief fight with Oliver, Darhk lets him go, saying that he has a few weeks to enjoy time with his family, before Darhk will kill him. Again, this felt like a lame way to extend the conflict between these two, and even Darhk’s wife chastises him for letting the Green Arrow live. Sure, Darhk has a point about it being bad form to kill someone who just saved his family, but perhaps Anarky should have been severed from the Darhk plot entirely, since it doesn’t feel satisfying to have him be a small element of the Darhk conflict. Anarky should be his own independent villain, free of Darhk’s agenda.

Lastly, Diggle had to interrogate his brother for Darhk intel, though most of this didn’t really go anywhere. Predictably, Andy held out and wouldn’t tell Diggle anything, even when Diggle resorts to beating him bloody, and this somehow culminates in Diggle having a pep talk with Lyla, then playing cards with Andy, then getting the info he needs. Wait, what? Something about that sequence of events really doesn’t add up, especially when it’s suggested that Diggle and Andy already had trust issues long before Andy started working for Darhk.

This just leaves the flashbacks, though these weren’t all that interesting either. Oliver is taken to Reiter, with Conklin insisting that Oliver is a traitor, and using Diana being alive, along with the two hoarding maps, to finally convince Reiter of that fact. Reiter decides to let Conklin beat Oliver to death, after a thorough whipping to start, though after Reiter notices that Oliver has the protection ward on his abodmen from Constantine, he calls off Conklin. After this, Oliver and Diana are thrown in jail. That’s it. So, basically, they were captured, and they’re still captured, making the flashbacks feel like they didn’t really go anywhere in this midseason premiere. I suppose that Reiter now knows about Constantine’s protective spell, but so far, that’s amounted to nothing.

“Blood Debts” is a bit uneven, and feels like it has to strain to move Arrow forward, after the excellent midseason finale presented a big shake-up, though the episode gets enough right to avoid the feeling of disappointment. The fallout to Felicity being shot up was good, even if it did feel like a troll from the showrunners to be so melodramatic about her fate, only to confirm in this episode that it’s definitely not her in that grave four months from now. Likewise, the action was pretty solid, especially with Anarky starting to become more dangerous. The transparent excuses to prolong the battle against Darhk were annoying though, and that’s not a good way to keep up a seasonal conflict for the start of 2016.

Arrow 4.10: "Blood Debts" Review
Arrow delivered a dramatic and intense midseason premiere, albeit one that suffered from uneven writing quality. The emotion was powerful, but would have paid off better, had the show not tried to distract from Darhk with the presence of Anarky.
THE GOOD STUFF
THE NOT-SO-GOOD STUFF
2016-01-25
73%Overall Score
Reader Rating: (0 Votes)
0%