NOTE: Full spoilers for this episode of “Heroes Reborn”, including multiple major character deaths, are present in this review

With its story coming to an end, and NBC declaring that this is definitely the end of the line for Heroes, Heroes Reborn’s final episode, “Project Reborn”, seemed to descend into full-blown lunacy. The writers and actors have both clearly given up at this point, resulting in a series finale that is rife with contrivances and deus ex machina plot turns, giving every principal cast member a chance to play some part in the final struggle to save the world, though not really doing so in a cohesive, or even coherent, way.

With Tommy trapped in Evernow, Emily and Ren try to fish out Miko and wake up Otomo, though are surprised to see that Miko doesn’t recognize Ren. Ren is obviously unaware that Miko and the Katana Girl construct posing as Miko are not the same, though this point is never really addressed, as Otomo just wakes up, kills Erica’s goon, and then sends Ren into Evernow to rescue Tommy.

Tommy, meanwhile, is stuck in an Inception-like computer world where time has no meaning. Despite billing Tommy as being trapped in a prison within cyberspace, the episode also acts like Tommy is somehow trapped within his own mind, which makes no sense whatsoever, but who cares, this farce is ending, so just go with it. It’s here that Tommy sees that contact with Malina will result in a violent energy reaction, but the lack of stability means that both of them will be in danger. Obviously, it won’t be so simple as Tommy reuniting with his sister to save everyone.

Back in the present, Carlos and Micah’s party get Farah to the safety of a hospital after the kerfuffle with Joanne, then Micah powers up the equipment, and a bunch of injured people come in, while Quentin, Luke and Malina make a run for outside. Carlos, Micah and Farah (who is awake now, for reasons) then decide to help the injured people, and, that’s it. That’s completely the end of their story arc. In the end, Carlos, Farah and Micah all simply served as plot device characters, and never really achieved all that much in the way of worthwhile character development. Too bad.

Regardless, Malina, Luke and Quentin go outside to witness the first solar flare, somehow not being cooked alive and simultaneously dying of acute radiation poisoning, because the show clearly doesn’t care anymore. Luke decides to use his solar manipulation abilities to somehow sacrifice himself and stop the first solar flare, and that’s his half-assed redemption. The miniseries really wants you to care that Luke is dead, but it’s doubtful that you will. He was a horribly inconsistent character, and mostly unsympathetic, even when he gives his life to save the world. 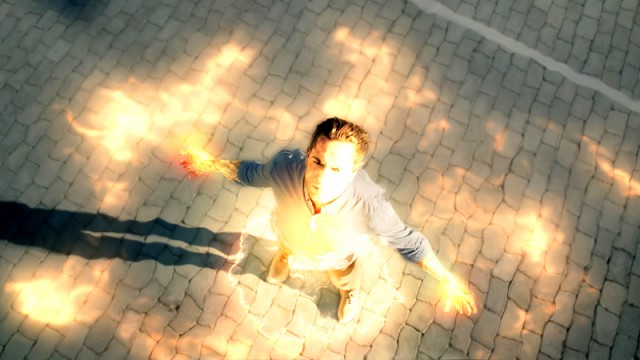 Phoebe then decides to attack Quentin and nearly kill Malina at the top of Odessa’s clock tower, even when Quentin points out the obvious, that Erica has betrayed them. Quentin is forced to shoot Phoebe, with Malina luckily catching the next stairway down instead of splatting on the bottom floor, and Phoebe falls to her death, resulting in another character death that no one will care about. This is pretty much where we leave Quentin for now.

Malina then tries to push back the second solar flare, but can’t do it. Fortunately, this is around the time that Ren manages to save Tommy, pulling him out of Evernow at the exact moment when it’s dramatically convenient, somehow, only to be surrounded by Erica and her guards, with Erica also holding Emily and Tommy’s mother hostage. Erica makes a worthy speech about one of the two worlds having to die, but, in the mother of all deus ex machina moments, Tommy pulls a new power completely out of his ass, and splits into two clones, with one staying in the future to send everyone back, and the other helping Malina stop the solar flare. I’d call it lazy writing, and it definitely is lazy writing, but there’s something almost boldly commendable in just how much the writers didn’t care about developing Tommy’s character any further at this point.

Regardless, future Tommy succeeds at using the machine to send everyone back, just in time to seemingly wipe Erica out of existence (her fate isn’t really made clear), while present Tommy tries and fails to join with Malina to stop the solar flare. After realizing that the two can’t stabilize their combined energy, which appears for literally no reason, and has never appeared for any other Evos ever (because those deus ex machina moments just keep on coming), Tommy goes back in time to conveniently have Angela explain what they need to do to stop the solar flare; They need a third person. Yet again, this is something that the writers completely pulled out of their asses, because they wrote themselves into a corner in the eleventh hour. If a third person was required to channel the abilities of Tommy and Malina, somehow (as you can expect, it’s never explained how this works or why it’s necessary), Angela definitely would have mentioned that to Noah when it came up. A third person is a pretty significant vision detail, and she definitely wouldn’t have just forgotten to bring it up!

So, that explains where Noah ended up in “11:53 to Odessa.” Tommy needed a third person to sacrifice himself for the greater good, and Noah just does that, with absolutely zero consideration for his life or any other consequence, because it’s the finale, so let’s just get this over with. Noah helps Tommy and Malina push back the final solar flare, then Noah dies after saying he’s proud of his grandchildren, because Heroes Reborn needs to keep insulting the original Heroes fanbase by killing off veteran characters for cheap drama.

With the world saved, and Erica’s future cancelled, Quentin is left to deliver a final monologue in prison to some government agents, and honestly, it’s not a terrible speech. That’s why it’s too bad that it’s stuck capping off such a lousy miniseries. After that’s done, we then see where the principal cast members end up, going back to their ordinary lives (or in the case of Carlos and Farah, becoming superheroes for some reason, completely going against Quentin’s sentiments), and both Tommy and Malina then find weird cards. Malina then reunites with a de-aged Angela (kind of a blatant continuity error there, guys!), who warns her that her father is coming for the twins, and that nothing can protect them now, implying that Claire’s baby daddy is some sort of bad dude. Yes, this frustrating disappointment of a miniseries has the gall to end on a cliffhanger, one that will likely never be resolved, as NBC has denied a renewal for Heroes Reborn, and has pretty much directly declared that Heroes is dead with the conclusion of this miniseries.

How fitting, because Heroes Reborn’s final episode is about what you would expect it to be. It’s completely ridiculous, rife with contrived, lazy writing to punctuate a confusing, messy finale, and the fact that the miniseries ends in sequel bait is pretty much unintentionally hilarious, given what the sorry final product of this miniseries has been. Despite all of its delusions of grandeur, this miniseries offered an ending just as lacklustre as most of its setup in this final episode, proving once and for all that Heroes is better off dead and buried.

Heroes Reborn Episode 13: "Project Reborn" Review
Heroes Reborn's final episode is just as confusing and contrived as you would imagine, giving all of the main cast something to do at the very least, though nonetheless wrapping on a messy note, and having the hilariously ill-advised gall to sequel bait on top of that.
THE GOOD STUFF
THE NOT-SO-GOOD STUFF
2016-01-25
57%Overall Score
Reader Rating: (0 Votes)
0%