The CW’s DC Television Universe is rapidly expanding, on the backs of the huge critical and ratings success behind Arrow and The Flash. Given that those shows are still absolutely dominating The CW’s ratings, it’s small wonder that the network would push for yet another spin-off. Now, we have our biggest new DC television show yet, Legends of Tomorrow, the first-ever superhero ensemble drama made for primetime television!

The series is so big in scope in fact, that its pilot episode actually had to be divided into two parts! The first part of the pilot has now aired, with the second set to air the following week. This is quite unorthodox for a primetime television show, particularly a modern primetime television show, and it does create the slight impression that we’re kicking off such a promising series with half of a story, and that’s a bit of a rough compromise to start things off with.

Nonetheless, Legends of Tomorrow is still a crazy amount of fun in its first offering, even if the show is bound to improve, once it continues to carve out its own unique niche in the DC Television Universe. The biggest downside to this first episode is that it feels like it’s all exposition, with the true story progression set to take place in the pilot’s second half next week. Fortunately, the episode is still entertaining enough to distract from the fact that this new series has to spend its entire first hour setting up for things to come later, and not offering any immediate payoff, so DC fans, or at least superhero fans who enjoy Arrow and/or The Flash, will still quite enjoy the show, and definitely want to see more by the end of the first episode.

Tonally, Legends of Tomorrow has more in common with The Flash than Arrow, though this might be predictable, given how colourful its advertising was. Even then however, Legends of Tomorrow definitely feels like its own thing, and doesn’t simply ride the coattails of The Flash or Arrow, which is ideal for any new spin-off in the DC Television Universe. You could arguably state that Legends of Tomorrow is the most light-hearted and family-friendly of the three DC shows on The CW, though that’s not to say it’s immature. The show is still clearly directed at teen audiences and up, and has a harder edge than CBS’ especially fluffy Supergirl series, so it’s definitely not kids’ stuff.

In any case, what is this first episode about? Well, if you’ve seen the trailers, then you’ve already seen half of the episode, honestly, and that’s another potential problem with the two-part pilot necessity. Rip Hunter, a man in service to the Time Masters, who are tasked with preserving the integrity of the universal timeline (and are totally not Time Lords, for you Doctor Who fans), betrays his allies when they refuse to intervene in the world-conquering machinations of immortal warlord, Vandal Savage. If you saw 2015’s crossover episodes between Arrow and The Flash, then you would have met this guy already, though even if you didn’t watch those, the episode still just more or less establishes him as an immortal madman who believes that humanity can only be improved through strife. It’s a fair enough foundation for a villain, but hopefully, Savage gets better development in future episodes. 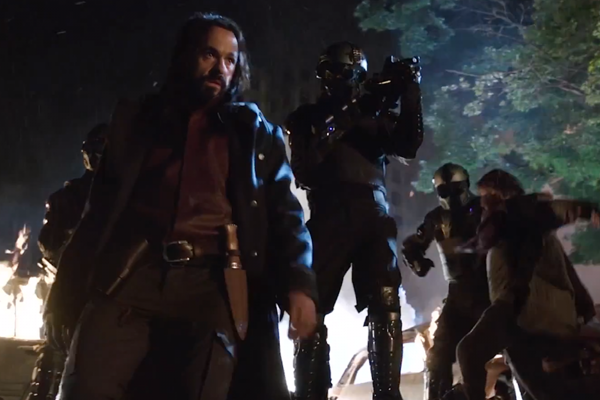 Rip decides to assemble a team of heroes that are located over a century in the past, which consists of the supporting do-gooders, and two villains, from Arrow and The Flash. After forcibly getting Ray Palmer, Sara Lance, Jefferson Jackson, Martin Stein, Kendra Saunders, Carter Hall, Leonard Snart, and Mick Rory on a rooftop together, Rip tells them of the destruction of the world at Vandal Savage’s hands in the future, and the group has 36 hours to decide whether they will travel with Rip to save the future. After Ray talks to Oliver Queen and Sara talks to her sister, Laurel, with Stephen Amell and Katie Cassidy both making brief guest appearances from their lead roles on Arrow in this pilot episode (nobody from Team Flash shows up though, sadly), everyone eventually decides to go along with Rip, who takes them to 1975, to glean Savage’s location from a college professor that’s about to die.

This is where the actual story element of the episode was at its strongest. The reveal that the professor was Kendra and Carter’s son from a previous life was pretty surprising and emotional, especially when the two go against Rip’s orders to try and save him, particularly when they’re attacked by Chronos, a bounty hunter from Rip’s timeline, and the arch-nemesis of Ray Palmer’s Atom from DC Comics lore, even if he seems to have little in common with his counterpart from the printed panels. The professor dying during Chronos’ attack, and Kendra and Carter feeling some guilt from that, felt legitimate, and gave credible reason for them to have some doubts about taking on Vandal Savage on this time-hopping mission. 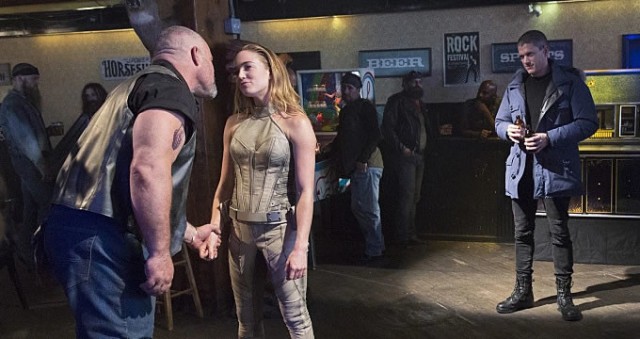 Fortunately, this was also nicely off-set by some silly fun, as Sara, Leonard and Mick go out drinking and dancing at a nearby bar, only to start a fight after Sara fends off the advances of a local thug. This was mostly a way to set up the show’s goofier side, though still injected some welcome action in a first episode that, frankly, is exposition-heavy to a fault.

On a related note, some of the new character direction in Legends of Tomorrow feels a bit weird, and disconnected from some of these personalities’ portrayals on Arrow and/or The Flash. Some of them add up, such as Ray’s mischievous, witty and tech-savvy playboy persona, along with Leonard and Mick basically being in it for the chance to steal things and hit people, though a few other personalities stick out as being glaringly different. For example, after so much angst and bloodlust on Arrow, Sara Lance is all of a sudden a laid-back party girl who is outgoing, and savours the opportunity to let loose and have fun on Legends of Tomorrow. Huh? Likewise, Jefferson Jackson had rough edges on The Flash, but was still a good guy. Here, he’s portrayed as a selfish, trigger-happy coward, while Dr. Stein is portrayed as suddenly having a late-life crisis and craving adventure, even when that seems to go against his disposition during his time on The Flash. I get that the dynamic between the characters needs to be re-tooled to have them fit together in their own ensemble series, but if you’ve been keeping up with Arrow and The Flash before watching Legends of Tomorrow, you’ll notice that some of the characters seem to act differently for no identifiable reason.

Even so, the way that this first episode plays with the skepticism behind making an entire DC Comics drama about B-list heroes, and two villains even, is pretty clever. Towards the end of the episode, after barely escaping Chronos, and hiding out in the void between time periods, Rip eventually confesses that his claim about the heroes and villains being, “Legends” in the future was a lie, and that they were actually chosen because their lives have minimal impact on the timeline in his future, so recruiting them would preserve the history of 2166. This is something that gets to the protagonists nicely, and has them second-guessing their worth in life, just as people second-guess their worth as the leads of their own ensemble show. Nonetheless, they resolve to make their own future by successfully stopping Savage, and realize that if they can save the world, they also have the power to change their fates. That’s a pretty good springboard for a promising new superhero-themed series, I’d say. 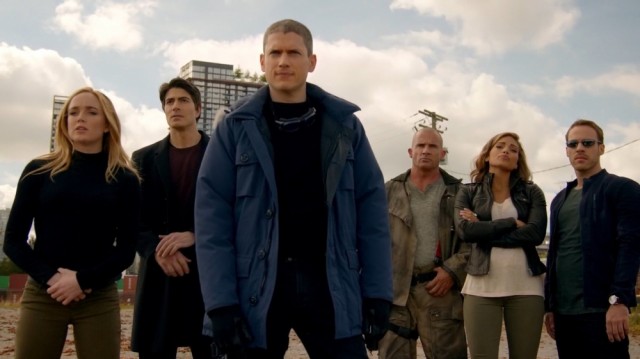 Legends of Tomorrow doesn’t deliver a perfect first episode, but it still offers a pretty good one, and definitely an entertaining one. This first half of the pilot feels a bit excessively exposition-heavy, and doesn’t really justify why it’s swapping around the personalities of some of the leads, but the sense of fun and excitement is definitely palpable throughout the episode, and the sense of grand, heightened event-style spectacle is definitely captured very well. If you already love DC shows, then Legends of Tomorrow is something that you’ll definitely want to tune in to. It’s not yet matching Arrow or The Flash in terms of quality, but with some fine-tuning, it will definitely get up to that standard in short order.

Pilot Review (Part 1): Legends of Tomorrow
The first part of the two-part Legends of Tomorrow pilot is a fun and entertaining offering, if also an exposition-heavy one. While the show gets off to an enjoyable start overall, it's easy to get the sense that any story payoffs are being saved for later for now.
THE GOOD STUFF
THE NOT-SO-GOOD STUFF
2016-01-25
78%Overall Score
Reader Rating: (0 Votes)
0%