Superstore is continuing to bring the laughs for NBC, and once again, “Secret Shopper” doesn’t disappoint. While it once again omitted Cheyenne for some reason, the episode was still a very amusing one, and continued to work out the character dynamics very nicely, while delivering a good batch of solid jokes to boot.

This week, the big conflict comes when word gets out about a secret shopper making the rounds at various branches of Cloud 9. Apparently, the shopper’s evaluation has led to mass raises at some branches, and mass firings at others. The presence of the secret shopper thus gets Glenn and Mateo very paranoid, while Dina decides to take it upon herself to sniff out the undercover corporate spy. 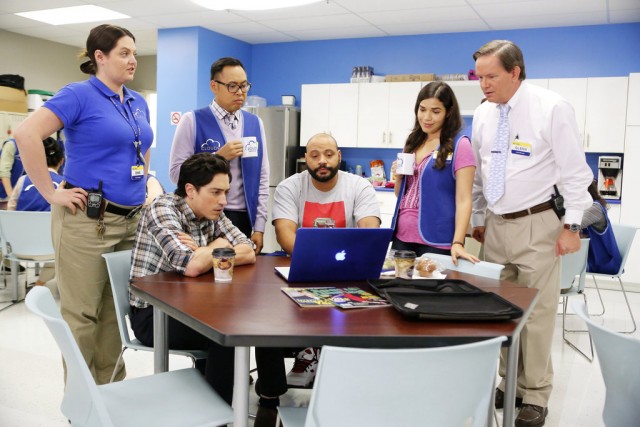 Once again, Dina is far and away the best part of the episode, owning a subplot that purely exists as ridiculous gag fodder, but it doesn’t really matter in this case. Every so often, the episode cuts to Dina hassling an innocent customer, using progressively sillier logic to try and declare why she thinks that person is the secret shopper. She’s wrong every time, and yet, even when she becomes aware of that, she just keeps pressing on. This was a fantastic way to keep building on the especially hilarious Dina plot in “Shoplifter” last week, proving that Dina really hasn’t learned a thing since she last got carried away with this sort of determination. Rather than make her character less appealing though, her bull-headed stubbornness becomes more appealing with every episode of Superstore, and it’s doubtful that she’ll ever learn her lesson here. Still, the show will be better for it.

Even with Dina off on her own mission, it felt like the Superstore ensemble was tighter than ever this week, and that the finer points of their interactions are now effectively being nailed down. This led to stronger, more confident jokes overall, particularly as Garrett tries to mess with Mateo as revenge for scaring off an attractive customer, which has the knock-on effect of having Glenn suspect that Jonah is the secret shopper, leading to Glenn awkwardly trying to curry Jonah’s favour. The way that the employees’ rapport is being capitalized on in this manner is working very well, and is helping Superstore stand apart as its own unique workplace sitcom, rather than chasing the successful workplace sitcoms of NBC’s past. 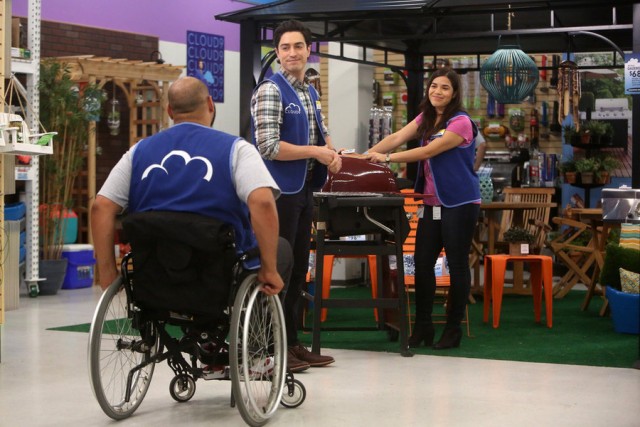 The continued building of the inevitable romantic relationship between Jonah and Amy was also more tolerable than usual this week, even if some of the plot foundations for this were suspect. The Jonah/Amy plot kicks off with Jonah somehow scoring a perfect 100% on the employee test, which upsets Amy, who believes it shouldn’t be possible. This is the main element of the story that feels like a stretch, since the show has previously tried to portray Jonah as a well-meaning oaf, and Amy as a beat-down cynic. Thus, it doesn’t totally make sense to have Jonah suddenly be brilliant and pedantic about how to do one’s job at Cloud 9, just like it doesn’t totally make sense to have Amy care about a meaningless employee test when she already doesn’t have passion for her work, even when she explains why it bothers her later.

Still, this at least leads to a pretty amusing scene of both Amy and Jonah struggling to work a forklift, which culminates in the destruction of the stock room, more or less. This is where Amy and Jonah calm down and have a heart-to-heart, with Amy confessing that she’s started taking college classes again, which is why she’s sensitive about Jonah outperforming her on the Cloud 9 test. Again, that doesn’t totally add up, since that seems like apples and oranges, but this is a minor nitpick. At least it feels like these two are genuinely and organically bonding in this scene though, and not just being pushed together because that’s where the writers want them to go, because it’s NBC mandate.

“Secret Shopper” is another solid episode for Superstore, and is one of the best yet for character development. While “Shoplifter” offered some slightly bigger laughs last week, the humour was still pretty strong in this episode, particularly with Dina yet again stealing the show. Even the “Jamy” romance foreshadowing didn’t go over too badly this week, even if the same can’t be said about that stock room.

Superstore 1.6: "Secret Shopper" Review
Superstore delivers another solid episode this week, and one with an especially strong focus on good character development, even if Dina's gag-driven subplot seemed to stand above the rest.
THE GOOD STUFF
THE NOT-SO-GOOD STUFF
2016-01-25
83%Overall Score
Reader Rating: (0 Votes)
0%