Despite Legends of Tomorrow now moving on from its two-part pilot episode this week, “Blood Ties” stayed in largely the same gear. The group is still hanging around in 1975 to start, and both the death of Carter and Kendra being incapacitated are still clear and present issues. Fortunately, the episode still proved to be entertaining though, adding some great character pairings as the group splits off and takes care of individual business, while continuing to demonstrate the true scale and influence of Vandal Savage as a villain.

The episode begins with the reveal of Rip actually attempting to kill Savage in ancient Egypt once already, before he was immortal, and later, we learn that Rip predictably wasn’t successful. This gradually comes out after Rip makes another rousing speech to the team, about perspective, and seeing darker times where, “Men of Steel died and Dark Knights fell” (yet again subtly teasing that Superman and Batman do exist off-screen in some form within The CW’s DC Television Universe), though in truth, Rip is as discouraged as everyone else. Fortunately, Sara gives him a new idea though; If Rip can’t kill Savage, he should instead try to cripple him, namely by attacking his finances.

This leads to one of the episode’s best core plots, as Rip and Sara team up, masquerading as, “Rockefellers who came into an inheritance” to try and hit Savage’s money pit, leaving him without capital for his operations for at least a decade or two. Rip and Sara prove to be a very entertaining team, particularly when Rip tries to play things cool, whereas Sara is all too happy to start kicking and slicing up Savage’s goons. In fact, this episode seems to double back a bit on Sara being an apparent party girl, with Sara now being reminded of her ‘bloodlust’ from the Lazarus Pit, and once again struggling with it, despite the intervention of John Constantine when she first returned to life on Arrow this season. In fact, there’s a bit of an obvious character goof that Legends of Tomorrow inadvertently created with this episode, as Rip and Sara have to pretend to be a dancing couple at a party that Savage’s crew is in attendance of, with Sara claiming she’s, “Not much of a dancer.” Boy, Sara must have a really short memory, given that she was the only one on the dance floor at that dive bar in this very same time period not days ago!

Regardless, Rip and Sara eventually end up caught by Savage, where they see that their failed attempt to hit Savage’s wallet wouldn’t have amounted to much anyway, since Savage’s followers revere him as a god. Seeing Savage amass a cult of fanatics is the most interesting that the character has been yet, especially when the intense red shooting of the blood sacrifice using Carter’s body is so well-done and memorable. Things look bad, but Rip manages to stab Savage enough to get away, while Sara proves that she’s combating her bloodlust by stabbing next to the guy that she’s subdued. Progress, I suppose. Fortunately, Leonard, Mick and Jefferson showed up to bail them out, and Jefferson didn’t even need to become Firestorm in this case! 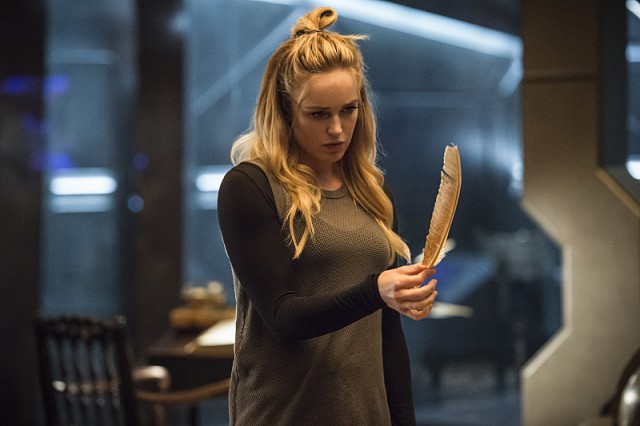 Speaking of Leonard, Mick and Jefferson, they spearhead another effective subplot, where Leonard decides to steal a valuable emerald in Central City, knowing that it just arrived in 1975. Jefferson gets forced along with the two criminals, though what seems like a routine heist proves to have surprising dramatic weight for Leonard. Apparently, this is the emerald that a younger Lewis Snart stole, and ended up in jail for, which is what first turned him into an abusive tyrant, five years later.

This leads to Leonard paying a visit to the old Snart house to try and give his younger father the emerald, in hopes of changing the past to prevent his arrest and erosion as a person, though he instead encounters his child self, who mistakes the adult Leonard for a friend of Lewis. This nicely builds on the emotional Snart-centric episode that The Flash aired around the start of its current season, with Leonard telling his child self never to let anyone hurt him, and to always take care of himself, in a truly standout scene for the episode. Lewis points a gun at the adult Leonard though, as the younger Leonard runs up to bed, and the adult Leonard tries to give the emerald to his father, saying in no uncertain terms that he saved him the trouble of being arrested. Leonard also says that he would kill his father in the past too if he could, though that would erase his sister, Lisa from existence, so his hands are tied. 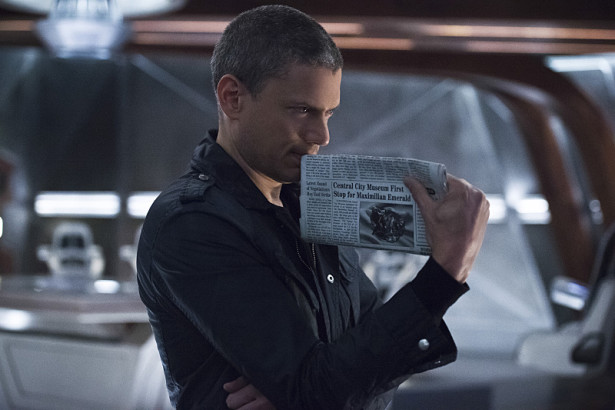 The conclusion to the subplot is just as emotional and dramatically satisfying, as Lewis ends up being arrested anyway, after trying to sell the emerald to an undercover cop. Despite his best efforts, Leonard failed to change history for the better. This is kind of sad, not only because it continues to show glimmers of Leonard’s good side, making him an all the more interesting and great villain character, but also because it shows that, despite how delicate the timeline can be, sometimes, the Legends’ actions won’t really change anything. It’s a great blend of bittersweet disappointment, and one that made great use of Leonard’s character this week.

The one subplot that didn’t work so much in this particular episode is Ray’s and Martin’s. Ray decides to use his Atom suit to eradicate the dagger fragments that are threatening to stop Kendra’s heart and kill her, though after his suit is slightly damaged, he panics, and exits Kendra’s body. It takes a stern pep talk from Martin to get him to finish the job, and that’s the entire plot for the most part, beyond Kendra conveniently blurting out in a stupor that Rip and Sara are in danger, which she knows by some unspecified spiritual means. Unfortunately though, Ray being so easily frazzled feels very out-of-character, and Martin pretending to remember when Ray was a student felt odd and contrived. It was a valiant attempt to tie Ray’s yips with being reminded of the death of his fiancee at the hands of the Deathstroke Army from Arrow, and why he built his suit so passionately as a result (the fiancee’s surname is even revealed as, “Lohring”, suggesting that Ray’s DC Comics wife, Jean Lohring, who had a small part on Arrow during Season Two as Moira Queen’s attorney, may actually have some relation), though a bit of a dull one. Frankly, it just felt like the show didn’t know what to do with Ray or Martin this week.

Legends of Tomorrow continues to be a fun, epic DC experience for the small screen, though it is a relief to see the group move out of 1975 at the end of the episode. Still, the Rip/Sara plot was a superb mix of fun, horror and drama, and the very emotional Leonard plotline was also very interesting and satisfying. The Ray/Martin plot didn’t really work as well, but that’s merely a small part of a much larger episode. Things are continuing to move along at a satisfying pace, though the change in scenery next week (or in just a few days, for us lucky Canadians who get to watch the next episode early after the Super Bowl on Sunday!) certainly won’t go amiss.

Legends of Tomorrow 1.3: "Blood Ties" Review
Legends of Tomorrow continues to be well-realized for the most part in its third episode, as Rip and Sara go to compromise Vandal Savage's finances, and Leonard tries to change his past, even if the Ray/Martin subplot left a bit to be desired.
THE GOOD STUFF
THE NOT-SO-GOOD STUFF
2016-02-05
83%Overall Score
Reader Rating: (0 Votes)
0%