Leave it to the chaos of a one-day-only wedding sale to bring the crazy folks at Cloud 9 together once again! “Wedding Day Sale” continued to deliver some pretty amusing silliness within the fictional mass-merchandiser, though felt a bit more uneven than some of the past few episodes. This episode was still good overall, mind you, particularly in its standout Amy/Dina plot, and how it relates to some pretty satisfying material with Cheyenne and Bo, though the other subplots didn’t feel like they made as much of an impression.

As the episode’s title suggests, things kick off with a frenzied Wedding Day Sale at Cloud 9, which leads to the employees predictably examining their own relationship attitudes and prospects, as they do things like dislocate the shoulders of women that are too big for certain dresses they want, and take bets on who will successfully win a fight for the, “White net with glitter on it.” Superstore has largely found its groove when it comes to funny transitional gags and amusing little asides with the lead characters, and that continued to be on display for the most part this week.

Obviously though, it’s Cheyenne and Bo that get hit the hardest with wedding questions, as they recount to Amy their increasingly poor decisions with financing, particularly in regards to their own nuptials. Since Amy got married at nineteen, and made the mistake of spending far too much on her own wedding day, she takes it upon herself to talk sense into the two of them, while still trying to be cool about it, despite Jonah and Garrett shrugging at, “Two seventeen-year-olds making a bad decision.” Unfortunately though, Amy’s tactics work too well, as she eventually makes Bo realize just how expensive having a baby is, and Bo flees from the store, leaving a tearful Cheyenne behind, who is thankfully too dumb to realize what just happened.

This is what leads to the episode’s best storyline, as Dina decides to chase down Bo, who ran off with a Cloud 9 scanner gun, and eventually ropes Amy into coming along, when Amy gets concerned about Dina brandishing a taser. This leads to the first real storyline of Superstore that takes place outside of Cloud 9, and it doesn’t disappoint! Getting further insight into Dina’s home life, such as the truck that she intentionally ordered without a radio at an extra cost to deter thieves, along with the fact that she largely sustains herself on cans of baked beans, is pretty funny, especially in contrast to the more mature and level-headed Amy. The two even find Bo pretty early on as well, though Dina is distracted by a homeless man who appears to have stolen a Cloud 9 cart, leading to Dina doing an abrupt u-turn and fighting for the cart, before realizing after the commercial break that it’s not a Cloud 9 cart, in one of the episode’s best jokes. Obviously, Bo gets away again in the process.

Initially, Amy is angry about this, though Dina soon confesses that she’s looking for excuses to stay out of the store, since she has a hard time with sales on wedding products, on account of seeing so many women that are ravenously happy to have found someone that they’re marrying. The two then start to bond over shared personal experiences, in both a funny and emotional way, complete with Dina confessing what she perceives to be a flirtation with an employee at work, with said employee obviously being Jonah, though Dina doesn’t name him. Eventually, Amy decides that the two women should pamper themselves, looking at a corner spa, though Dina mistakes this for Amy looking at the nearby firing range, and the two end up shooting guns together, which is pretty funny, especially when Amy knows her way around a firearm a little too well!

Fortunately, by pure chance, Bo ends up entering the firing range, where Amy and Dina confront him, believing that he’s abandoning Cheyenne. Turns out however that Bo was actually taking Amy’s advice to heart, and had begun passing out resumes around St. Louis, to make more money for the baby. This was kind of a happy twist, especially since Superstore is generally a pretty upbeat sitcom, though it was funny to have Bo hand out a resume that still includes placeholder lines, such as claiming he works in medicine, or as a producer of Vogue Magazine. The round-off of the two re-entering the store right as the episode ends, where Amy witnesses Dina’s crush on Jonah first-hand, was also pretty good, and made a nice way to foreshadow a romance between Amy and Jonah, without beating us over the head with the possibility, like many of the previous episodes of Superstore have.

This leads in to the subplots, though honestly, neither of them felt particularly large or consequential. The running joke of Jonah and Garrett getting into progressively more heated arguments over how Cheyenne should plan her wedding had some pretty funny moments, though the resolution happens off-screen, when Cheyenne settles on a wedding dress from the, “Farrah Abraham Collection”, because of course she did. The other subplot involved Glenn and Mateo, after Glenn finds out that Mateo is gay, and feels that he needs Mateo’s help to learn how to be less awkward around an engaged gay couple shopping at the store. There’s some silliness and a few solid jokes, but that’s really it. It felt like this plot only existed to give Glenn and Mateo something to do this week, frankly. 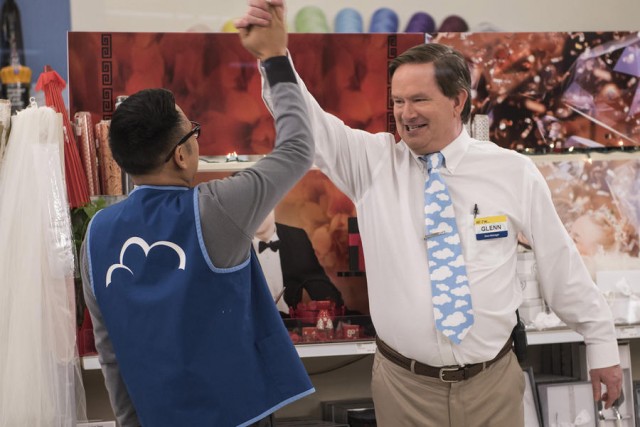 Superstore continues to amuse, even as it approaches the final trio of episodes for Season One. The wedding-themed antics of the group paid off better for some characters over others, but at least a good time was had by all. Cheyenne and Bo even (sort of) attained some personal growth in the process, and after their hilarious team-up in, “Shoplifter” a few weeks ago, it’s fun to see Amy and Dina start a path to becoming buddies outside of work. We’ll have to see if Amy ever gets used to that lingering odour in Dina’s truck though. That’s a sign of true friendship.

Superstore 1.8: "Wedding Day Sale" Review
While the first proper adventure outside of Cloud 9 by Amy and Dina overshadowed everything else, Superstore continues to amuse in its latest episode, as Cloud 9 gets swept up in the feverish frenzy of a one-day wedding sale.
THE GOOD STUFF
THE NOT-SO-GOOD STUFF
2016-02-07
77%Overall Score
Reader Rating: (0 Votes)
0%