Lucifer sadly regressed further this week, even though its lead character is still managing to sustain proceedings, thankfully. “The Would-Be Prince of Darkness” leaned heavier than ever on the show’s drier police procedural elements, and was all about a case-of-the-week, with a subplot about a Lucifer impersonator quickly ending up lost in the shuffle, resulting in a watchable episode that didn’t really impress all that much.

Things begin when Lucifer talks a squeaky-clean football star, who was aspiring to save sex for marriage, to hook up with an attractive girl at a party that his agent demanded he throw. Problem is, when Lucifer is woken up by the frantic athlete the next morning, the girl he hooked up with is lying face down in the pool, leading to Lucifer calling Chloe to the scene. After Chloe sees a rather incriminating sex tape of the player and the victim, she arrests the football star on the spot, with Lucifer wanting to solve the case, as he hates when the wrong people are punished. 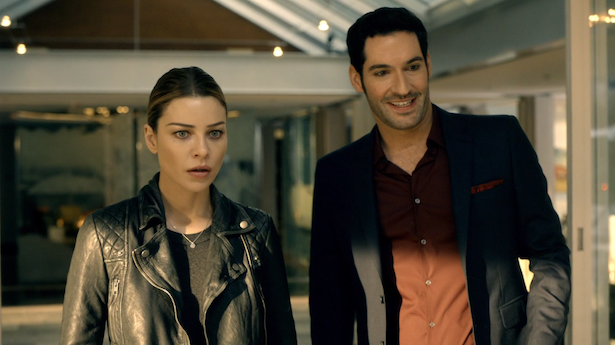 Like I said, for as much as this episode sadly didn’t have as much of a fun factor as the previous two, Lucifer himself is still a delight to watch. Seeing Lucifer move even faster on the case than Chloe was pretty amusing, especially when she manages to trace a lead back to the athlete’s agent, only to find that Lucifer is already there, questioning a series of agents as to their sleazy moneymaking practices. Naturally, the agent lead points somewhere else, and Chloe eventually resigns to having Lucifer around, once again, leading to the two then probing a crazy ex-girlfriend of their arrested football star, who barely dodges a car bomb before their eyes.

This is where the case sort of gets weird. Apparently, the bomb was planted by a fixer, who wanted to scare the woman for… Reasons that the episode doesn’t really specify that well, especially when the case comes to its conclusion at the end. The whole car bomb thing just felt like a contrived way to incorporate this infamous fixer character that Dan has been chasing for a while, continuing to give Lucifer an excuse to participate in the case, as he is the LAPD’s best chance to enact a sting operation against the notoriously careful and slippery fixer. When the fixer meets Lucifer however, she instead presents him with the opportunity to get his hands on an impostor that is going around pretending to be him, racking up credit card debt with Lucifer’s identity, and even worse, sullying Lucifer’s sexual reputation!

As funny as it is to see a rather homely man have the gall to pretend to be the Prince of Darkness, and actually get away with it for a little while, this subplot ended up being a disappointment. Lucifer and Maze manage to scare the guy enough into confessing, after the fixer delivers him, though Lucifer, surprisingly, lets the fake go with a stern warning, much to Maze’s annoyance. Lucifer still however delivers the fixer to Dan and Chloe, with the next piece of evidence pointing to, once again, the most obvious suspect in the case; The sleazy agent. Boy, Lucifer really needs to start coming up with less predictable cases-of-the-week if it’s going to press on with this format, especially since the pilot at least managed to have an unexpected ending to its case.

Regardless, the agent ended up killing the woman by accident, when she wouldn’t hand over the sex tape that the agent hired her to make, as blackmail for the football star appearing to sign to another agency. When the truth comes out after a bluff from Chloe however, Lucifer becomes enraged, and briefly uses his devilish strength to hurl the guy several feet away, much to the shock of everyone around him. Fortunately, he calms down, though not before putting Chloe on the trail of the security footage, where she closes out the episode by trying to figure out just what happened there. It seems inevitable that Chloe will probably know of Lucifer’s true identity by the end of the season, since she’d have to be pretty stupid not to see that something is really wrong with this guy by now.

We also got a re-appearance from Linda this week, even though Amenadiel was completely absent in this episode, which means that the show’s stronger supernatural angle was largely non-existent this week, and that’s a bummer. Linda continued to poke at Lucifer changing, and the idea of Lucifer re-inventing himself in a more desired image, which was why he was so angry at the impostor. It’s an interesting idea, but again, it’s overshadowed by a lacklustre case-of-the-week that is still not that engaging or surprising. 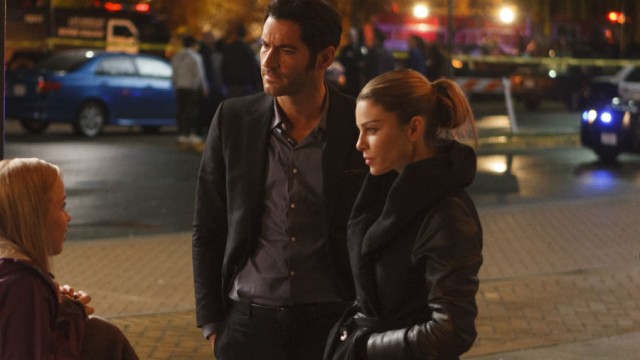 Lucifer still deserves better than being a run-of-the-mill police procedural that just happens to have a standout lead character, even though this comic book adaptation has pretty much nothing to do with Neil Gaiman’s Sandman graphic novels at this point, nor the spin-off Lucifer comics that they spawned for Vertigo and DC. Sadly, “The Would-Be Prince of Darkness” is so far the least remarkable episode of Lucifer to date, as well as the least interesting. Hopefully it’s just a minor bump in this show’s early episodes though, and Lucifer returns to his finest form next week.

Lucifer 1.3: "The Would-Be Prince of Darkness" Review
Lucifer sadly delivered its least engaging or interesting episode so far this week, with the show leaning heavier than ever on its dull police procedural element, shackling the standout personality of Lucifer even further.
THE GOOD STUFF
THE NOT-SO-GOOD STUFF
2016-02-10
67%Overall Score
Reader Rating: (0 Votes)
0%