Arrow delivered quite the exceptional emotional cocktail this week, though one that didn’t come at the expense of a good return to the spotlight for Damien Darhk, as well as a new batch of recognizable DC Comics villains that lent themselves to some fine action. “Code of Silence” was all about the power and necessity of secrets, a favourite theme of this show from across its entire four-year run to date, though one that was still done well here, making up for the tired and overdue conclusion to the League of Assassins story arc that had to be given emphasis last week.

With Darhk’s wife, Ruve Adams officially entering the political arena, Oliver prepares for his first big debate with her, the first step to keeping final control of Star City away from Damien Darhk. While Oliver prepares to do battle against Darhk in the light however, there’s still plenty amiss in the shadows, as Captain Lance is lured to an abandoned building, which some hired goons attempt to bring down around him! Fortunately, Laurel was nearby to scuttle her father out before he came to harm. 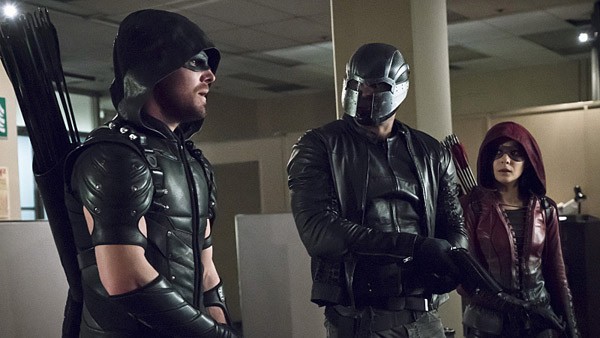 Said bad guys are Demolition Team, a group of construction-themed baddies that originally served as B-list enemies of Green Lantern in DC Comics lore, though in the case of Arrow, they mainly consist of more grounded thugs that happen to fight with construction equipment. Sure, it might come off as a bit gimmicky, but this show still does take place in The CW’s DC Television Universe, and it’s no weirder than the various metahumans that The Flash keeps ending up battling against week after week on his own series during Tuesday nights.

The presence of Demolition Team allows for a good chunk of high-quality action scenes, which are consistently enjoyable, rather than the more uneven action with the League of Assassins last week. There’s some surprisingly intense scenes in this episode, especially for television standards, and the action choreography is top-notch this week to boot. It would have been nice if Demolition Team had more depth beyond being hired goons, goons that barely even have any lines to boot, though at the very least, they restored the high quality of most of Arrow’s action scenes, so that gripe is easy to forgive. 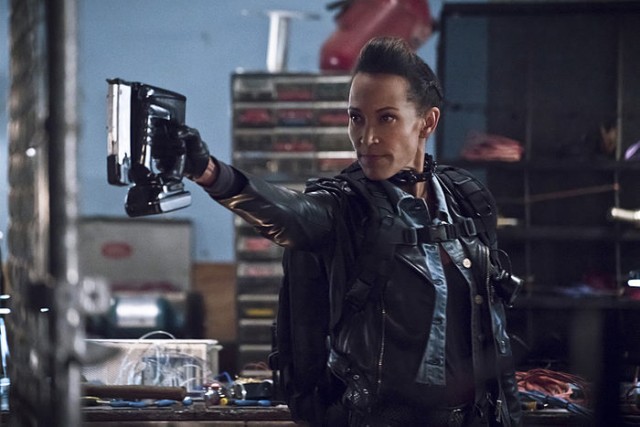 Also effective is how Oliver and Captain Lance both struggle with their respective secrets once again, particularly after Lance must go into hiding, claiming to Donna that he’s running away from gambling debts. Naturally, she doesn’t buy it, and even goes as far as to dump Lance outright, confessing to Felicity later that she can’t handle another lying boyfriend that will ruin her life. Sure, it’s pretty obvious that this break-up won’t stick, especially when Lance and Donna appear to reconcile by the end of the episode, but it was cool to see Donna still reeling from her past relationship pain, especially with the recent re-appearance of Felicity’s criminal father, just as it was also satisfying to see Lance suffer through the same conflict that he formerly gave Oliver so much grief over during past seasons, yet he still thankfully managed to fix things with Donna in the end.

It would seem that this fix won’t be so simple for Oliver though, who is still keeping the secret of his son from Felicity, especially after the aborted timeline from the most recent Arrow/The Flash crossover event led to disaster when Felicity was told about William. Thea finds out about William’s existence though, and implores Oliver to tell Felicity the truth, especially since the threat of Vandal Savage is now far away, presumably still a pile of ash in this timeline, despite still menacing this universe’s B-list heroes, and a couple of its best villains, on Legends of Tomorrow in the DC Television Universe’s past right now.

In fact, given the emphasis on secrets and lies, and how they can be necessary for the greater good at times, it was a bummer that the climax of this episode simply had Oliver and friends easily taking out Demolition Team with little hassle, despite their endgame being to bring the political building down on Oliver during the debate, yet sparing Ruve, making her a survivor that would guarantee the favour of Star City, while eliminating the main obstacle to Darhk seizing the city’s municipal power. Worse still is that the big debate between Oliver and Ruve wasn’t even seen. Instead, the episode simply cuts away to when Felicity and Donna are looking at the polls on TV in the loft, and seeing that Oliver had a landslide victory. That’s good, though it would have been better if the episode had perhaps shown a bit of exactly how Oliver managed to so thoroughly decimate Ruve in the debate.

As for this week’s flashbacks, they were better than usual, and had Oliver taking a big step forward in his battle against Reiter. After Reiter coerces Oliver and the other prisoners to start digging for whatever ‘promised land’ he’s looking for, the other prisoners initially seem intent on turning on Oliver, though Diana manages to convince Oliver to win their favour by killing Conklin. A final scrap soon after takes place with Conklin, and Oliver manages to come out on top, killing his tormentor, though earning the ire of Reiter in the process, who locks him up with Diana again. It’s a small step forward, but it was satisfying to see the first phase of Reiter’s actual mission start to unfold, just as it was also satisfying to see Oliver finally drive a knife through that bastard, Conklin’s heart! 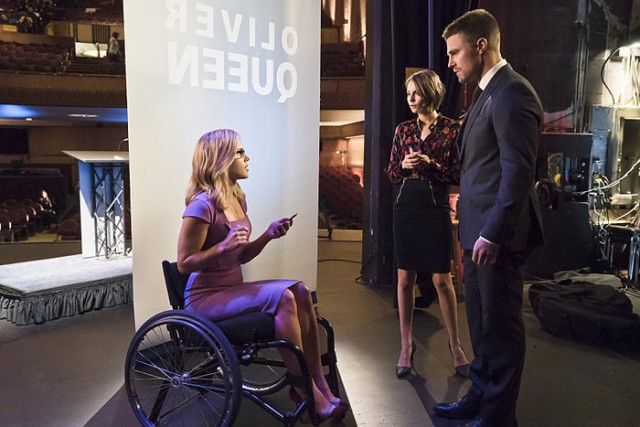 After the shortcomings of last week’s episode, it was good to see Arrow deliver a far better episode this week. The show feels like it’s done spinning its wheels and resorting to filler episodes, now that it’s finally putting Damien Darhk back in the story in a big way, as well as giving us a fun, if slightly shallow new rendition of some recognizable DC villains to vex Team Arrow this week. Hopefully the next big political battle between Oliver and Ruve isn’t left to our imagination though, especially as the episode ends with Darhk bringing William into the family!

Arrow 4.14: "Code of Silence" Review
Arrow got back on track this week, bringing Damien Darhk and his wife back into the spotlight in a great way, while also delivering some great action with the welcome presence of some recognizable DC villains, even if the politics of Oliver and the Darhk family are still left to the imagination.
THE GOOD STUFF
THE NOT-SO-GOOD STUFF
2016-02-19
84%Overall Score
Reader Rating: (0 Votes)
0%