The Big Bang Theory dropped such a surprise bomb last week, albeit a bit clumsily, that we had to spend an entire episode addressing it, and only addressing it, this week. “The Positive Negative Reaction” centered entirely on the group’s reactions to Bernadette being pregnant, including Howard, who initially doesn’t take the news very well.

In fact, Howard reacting negatively to the news of the pregnancy at first proved to be quite a shock, just as Bernadette being the calm and collected one was equally surprising. In past seasons, it was clearly indicated that Howard is very much looking forward to being a father, and Bernadette isn’t really a big fan of children, which initially led to friction between the two when they were starting out as a couple. Now, they interestingly seem to have switched roles, which indicates that Bernadette has no doubt matured since marrying Howard, and Howard has also matured, in that he’s become more realistic with his expectations, for better or for worse.

Nonetheless, the episode bringing the entire group together to celebrate the pregnancy was satisfying, especially when it led to so many good jokes. Initially, the guys and the girls are separated, with this episode more or less being divided into two parts. At first, the guys and girls react separately to the news, before they come together more for a climax that involves the lot of them goofing off in a pretty solid karaoke sequence.

As Howard freaked out when Bernadette cutely gives him the news that she’s pregnant, Howard also freaks out when he tells the guys. Leonard and Raj are thrilled and assuring, though Sheldon inadvertently re-affirms a lot of Howard’s worries, especially when he starts lamenting that Howard will change after he has a child, and will no longer be able to do things with the rest of the group. Sheldon’s petulance is predictable, though at least his concerns feel semi-legitimate this time, even if it was also funny when he claims that game nights and comic book store trips will be ruined because they’ll have to bring a child, and the child won’t enjoy it. Sheldon clearly doesn’t know much about children. 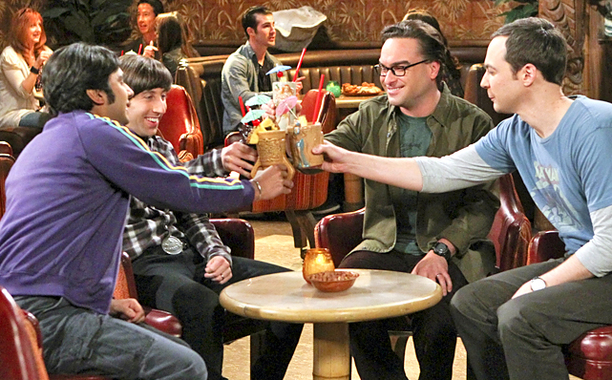 The girls meanwhile react to the news a bit differently, and look at things from a less hysterical and more grounded approach. Penny and Amy are initially thrilled, despite Leonard texting the news to Penny mere seconds before Bernadette announces it, but they soon become down at all of the things that Bernadette can’t do while she’s pregnant. It was interesting to show the guys thinking more about fatherhood, while the girls were thinking more about pregnancy, which avoided the two arcs feeling too similar. Fortunately, they both come together for the karaoke bit, which is good fun.

The karaoke sequence also proves to be a good excuse to get Sheldon drunk and having a great time again, even going as far as to sing on stage with everyone else! The reveal that Howard and Bernadette conceived the baby on Sheldon’s bed was pretty funny too, as, even when Sheldon’s drunk, he reacts pretty badly to this news. By this point, it injected a welcome big laugh into a decent sequence that does somewhat overstay its welcome. The joke of everyone singing about the baby gets old after a while, and it’s easy to get the sense that the episode is just filling time here, since it couldn’t fit a subplot into the baby bomb. Still, the comedy here is far better than the rather disappointing Valentine’s Day-themed episode that the show spat up last week.

It’s likely that The Big Bang Theory will have baby fever for at least the rest of the season now, with even Leonard and Penny musing briefly about having children right at the end of the episode, though admitting that they may not be mature enough to be parents yet, as they drew a Harry Potter face on a drunk Sheldon while he sleeps. This is rather ironic, as they were tediously moaning about being old and over the hill last week. Even so, “The Positive Negative Reaction” proved that the show can go in plenty of directions with Baby Wolowitz on the way. Maybe not every direction represents good fortune, but the Wolowitz family seems to ultimately be approaching their big step with equal parts humour and heart, and that’s great!

The Big Bang Theory 9.16: "The Positive Negative Reaction" Review
The Big Bang Theory spent an entire episode addressing the fallout of Bernadette's pregnancy news this week, delivering hearty, satisfying laughs for much of the duration, even if the episode seemed to run out of steam towards the end.
THE GOOD STUFF
THE NOT-SO-GOOD STUFF
2016-02-19
85%Overall Score
Reader Rating: (0 Votes)
0%