Superstore hit a seasonal high point with, “All-Nighter” last week, which is why it was kind of disappointing to get a slightly weaker episode in, “Demotion” this week. This episode was still funny overall, though its storytelling was occasionally awkward, and felt crippled by the need to make a big change-up to the show’s dynamic, which feels especially weird, given that the season finale is next week.

The change-up obviously begins with Dina following through on her wish to step down from being assistant manager, thinking that demoting herself to being an associate will make Jonah want to date her. Again, Dina’s strange innocence comes into play effectively here, though the demotion ends up putting a lot of pressure on not only Jonah, but also Glenn, who now has to try and find a replacement for Dina’s position. 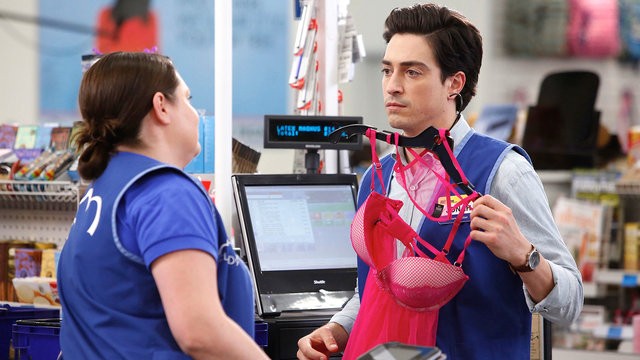 Amy seems like the obvious choice, and appropriately, Glenn asks her first, though Amy turns down the job immediately, thinking that she’s far too busy to take on an assistant store manager’s responsibilities. Instead, she helps Glenn try to find someone to promote, after Glenn’s best idea turns out to be elderly employee, Myrtle, who, predictably, is not all there, still. This results in a pretty funny sequence, probably the episode’s best, where several of the background employees from former episodes audition to become assistant manager, including downtrodden employee, Sandra, creepy employee, Sal, the douche pharmacist that forced Jonah to work in the pharmacy, mute supposed, “Sales machine”, Brett, and, yes, Myrtle. As Amy puts it, whether you read the applicants’ photos left-to-right or right-to-left, each applicant is worse than the last.

Dina, meanwhile, spends her first day back at associate level working in the cosmetics department with Cheyenne, which is an idea so horrible that it at least manages to get some good laughs. Dina is predictably terrible at the job, and as usual, Lauren Ash steals all of her scenes. You’d think that an episode so heavily focused on Dina would be better in fact, though sadly, “Demotion” ends up being merely decent, rather than outstanding. Still, at least Dina’s antics are fun as ever.

Things end in inevitable heartbreak though, when Jonah finds himself unable to refuse Dina’s pushy demands, eventually getting cornered in the change room with her, where she actually kisses him! Unfortunately, Jonah planned to break up with Dina using a voicemail recording, not one of his brighter moves, and the recording plays right after Dina kisses him, leading to her storming out in a fit of sadness and rage, which the next woman in cosmetics sadly suffers from. At Garrett’s behest though, Jonah decides to leave Dina alone for the remainder of the day, and let her cool off.

Speaking of Garrett, he and Mateo have a brief subplot, where Garrett decides to screw with Mateo in his bid for assistant manager, by constantly encouraging him to go bigger and more ridiculous with his planned pitch presentation. Like The Office’s Jim Halpert, Garrett seems to find the best ways to combat boredom in the workplace, and seeing him constantly push Mateo to increasingly theatrical extremes was pretty funny, and did at least have Mateo embarrassing himself in front of Glenn and Amy at the end of the episode, which was the sole bright spot of that portion.

It feels like the rest of this episode sadly ended on a sub-par note though. Everything falls a little too neatly into place, to the point where none of the questionable decisions that characters made previously seem to end up mattering. For example, Amy eventually capitulates to being Glenn’s new assistant store manager, and finds out that Glenn conveniently neglected to mention huge tuition aid from Cloud 9 for assistant managers, which also conveniently solves Amy’s money woes. It was a cool windfall, though it did feel like a quick and dirty way to wrap up one of Amy’s main struggles this season, since the season will be over after one more episode.

Likewise, Jonah got off far too easy after his behaviour with Dina. Jonah goes to apologize to Dina right after the workers’ shift ends, though is astonished to find that Dina has already moved on, to a fellow employee who previously inadvertently confessed that he stole headphones from the store to Amy and Glenn while applying to be assistant manager. This was kind of funny, though again, it did smack of being an easy way out for what was clearly supposed to be a larger conflict for Jonah and Dina, before the season’s episode order was reduced. Dina still demoted herself for the fool’s errand of pursuing Jonah, and given how seriously she takes her job at Cloud 9, you’d think that she wouldn’t be so happy about how that situation turned out, “Stress rash” and all. 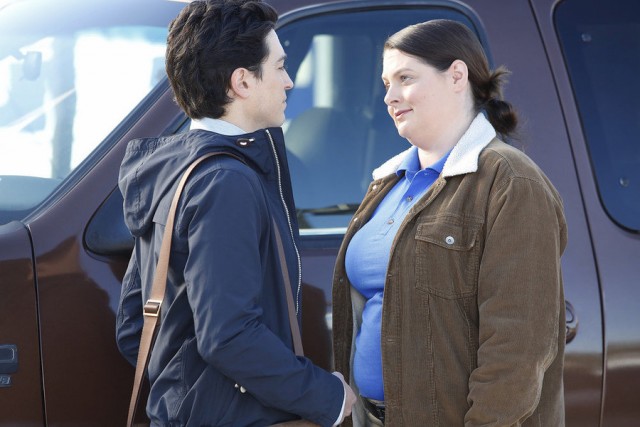 With just one episode left to go in Season One, after a slight trim to the episode order, due to NBC’s overcrowded midseason schedule, Superstore concludes this episode in a bit of an odd position. Does this mean that Amy and Dina have permanently switched places? Possibly, though we’d have to wait until the seemingly inevitable Season Two renewal for that question to be answered. Regardless, even if this week’s episode certainly wasn’t the season’s best, it still delivered enough laughs to satisfy, even though this seems to be the point where the show is suffering the most from its slight episode order reduction.

Superstore 1.10: "Demotion" Review
Superstore seems to suffer most from its slightly reduced episode order in this week's episode, where Dina's crush on Jonah comes to a strange and turbulent conclusion, while Glenn is forced to appoint a new assistant store manager.
THE GOOD STUFF
THE NOT-SO-GOOD STUFF
2016-02-19
74%Overall Score
Reader Rating: (0 Votes)
0%