As much as we’d like to think otherwise, Hollywood really hasn’t changed that much since the 1950’s. That seems to be one of the focal points of the Coen brothers’ latest eccentric comedy opus, Hail Caesar!, a movie that essentially functions as one giant love letter to vintage Hollywood culture, for better or for worse.

In true Coen brothers fashion, the movie is packed with a star-studded cast, some of which even includes faces that you haven’t seen on the big screen in a while! There’s several in-jokes made about stars’ careers and studios’ dirty laundry, just as there’s plenty of playful jabs made at the expense of just how much work goes into holding an entertainment industry together. Frankly, the movie’s trailers barely scratch the surface of the sheer amount of ground that Hail, Caesar! covers, and it could very well stand as one of the largest-scale comedies of 2016, even so early in the year!

That said though, in what’s also typical Coen brothers fashion, Hail, Caesar! can be a bit impenetrable. Many of the jokes will go over the heads of people who don’t perfectly understand the subtext behind the movie, namely if they’re not familiar with a lot of ins and outs from 1950’s Hollywood. It’s not enough to ruin what’s still a pretty enjoyable and memorable Coen brothers comedy, but it’s also difficult to argue that it’s no Big Lebowski because of this either.

While it is an ensemble movie at heart, the majority of Hail, Caesar! unfolds from the perspective of Eddie Mannix, played by Josh Brolin, a Hollywood producer and fixer who is one of the main reasons why his studio, and the actors associated with it, are able to keep their careers intact. Eddie cleans up messes, fends off the press, and basically keeps the Hollywood machine turning. Perhaps most fascinatingly though, is that Eddie Mannix was a real-life person, an actual Hollywood fixer that was working in the industry in the 1950’s. Hail, Caesar! no doubt portrays an exaggerated caricature of the actual man, but the idea of using Mannix as a device to lampoon Hollywood’s eccentricities and demands is pretty inspired, and often quite funny, especially when Brolin’s performance is arguably the best in a movie that’s already packed with great performances! 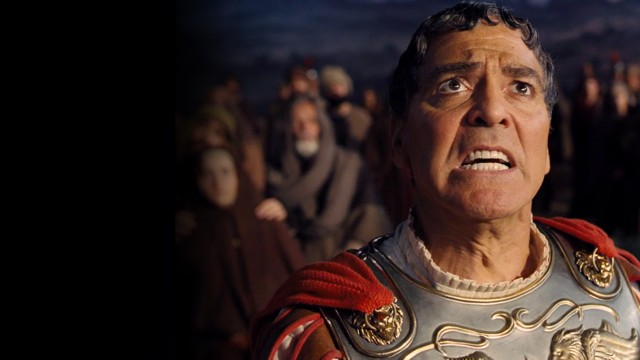 There’s no shortage of superb performers in Hail, Caesar!, even if some of them are barely on-screen for a couple of minutes, unfortunately. You’ll see fleeting appearances by actors like Jonah Hill, Scarlett Johansson, Channing Tatum, Frances McDormand and Ralph Fiennes for example, who are very amusing in their respective parts, though the marketing unfortunately makes it sound like they’re in the movie for much longer than they actually are. Hill in particular only gets one small scene, and Johansson has about two or three, at most. Many of their characters are discussed, though we end up seeing very little of what they actually do in their day-to-day lives, no doubt because this movie is already so huge in scope.

The marketing focused a little more on George Clooney’s character, Baird Whitlock, a bigwig actor parody that ends up being kidnapped and ransomed off by a Communist sympathizers’ group. Even though Clooney gets a bit more screentime, his storyline, just like the rest, ends up being a pretty modest cog in a very large, intricate machine. Another reason why the marketing focused on Baird Whitlock could be because a lot of the jokes around Clooney’s plot are the most accessible and funny in many instances, though again, Clooney’s not as much a part of the movie as the marketing would have you think.

There’s loads of personalities at play, even beyond what I already mentioned. There’s jokes made about pushy gossip journalists, portrayed as identical twins by Tilda Swinton that harass Mannix every now and again with alarming regularity, just as there’s jokes made about a Western actor being forced to expand his talents, played by Alden Ehrenreich, another of Hail, Caesar!’s best and funniest actors. There’s far too many personalities that come in and out of the movie to adequately sum up in a few paragraphs, but rest assured that none of them feel superfluous. They all contribute something engaging and fun to the movie, even if some of their storylines and humour will be easier to understand for general audiences over others.

Being an ensemble movie that functions as an overall love letter to retro Hollywood, you can imagine that Hail, Caesar! doesn’t follow the typical structure of a movie plot. This is correct. In fact, an impatient pessimist could rightly claim that Hail, Caesar! doesn’t really have a plot at all. It simply switches between the eccentric lives of various 1950’s Hollywood personalities, even if many of them are either fictionalized, or exaggerated parody versions of actual people who were living and working in Hollywood at the time.

This is likely the biggest weakness of Hail, Caesar!; The fact that it seems to be expressly made for the enjoyment of other Hollywood personalities, not general moviegoers. If you’re a senior now, who was always interested in the movie industry back when you were alive in the 1950’s, maybe you’ll stand a better chance at understanding the bulk of the movie’s jokes, but even middle-aged audiences who aren’t intimately familiar with Hollywood will be occasionally lost during several scenes, let alone young, twentysomething folks like me. Unless you know everything there is to know about Hollywood’s history, Hail, Caesar! is going to have several scenes that you just won’t understand.

Like I said though, that’s not enough to ruin the movie. There’s plenty of other scenes that will be quite funny, even to young adults and those uninitiated in the history of the movie industry, and while the movie doesn’t have a real sense of story-driven structure, its final product is still put together with plenty of writing polish. This is a very character-driven movie, and one that seems to unfold in a fantastical world that won’t totally feel real to everyday audiences, but fortunately, the sharp performances, witty writing and masterful directing still help to compensate for the story’s occasional lack of focus.

Given that Hail, Caesar! is helmed by the Coen brothers, you can imagine that it’s put together very well. Sure enough, the movie is exceptionally directed, and that helps to distract from the impenetrable story elements and lack of conventional plot structure. Even with such a large ensemble cast, it feels like everyone involved gets at least one great scene, and every actor in the movie is allowed to balance comedy and drama, making them feel sympathetic, even as they live and function in a larger-than-life world, particularly since Hail, Caesar! is often built as a movie within a movie.

In fact, the Coen brothers even manage to give the movie an impressive authentic feel, increasing the immersion considerably, even with the tiny budget. This may have spawned from the Coen brothers rejecting traditional digital cameras for the filming of Hail, Caesar!, and instead shooting it on actual film, before converting it for modern digital theatre projectors. This retro chic finish creates a movie that effortlessly brings you into its setting, capturing all of the glitz and glamour of Hollywood, which was embracing a pivotal transition period in the mid-1950’s when this movie is set, due to the increasing scope of colour productions, the increasing emphasis on both high art and celebrity culture in the movie industry that came after WWII, as well as the advent of television. It was a new golden age for filmmaking, albeit one that had a lot of concerns.

Perhaps the greatest directing achievement by the Coen brothers in Hail, Caesar! is how they manage to make the movie feel fresh and relevant, despite being a period piece, due to Hollywood seeming to be in another transitional period in the present day. The Coen brothers effectively draw parallels with Hollywood fearing the changes of the future in, frankly, ludicrous ways, just like they’re doing now, with the rise of the internet and digital streaming services. Despite that though, the magic of Hollywood is all over this movie, and that’s the true genius behind it. The magic will never disappear, no matter how irrational or jumpy studios get, and the Coen brothers capture that perfectly here!

Hail, Caesar! may not be the best Coen brothers movie, or even the best Coen brothers comedy, but it’s still a great comedy that’s a cut above most other offerings in the genre, especially in terms of scope and creativity. It’s a shame that the movie can be a little impenetrable with its humour at times, but fortunately, these moments don’t outweigh the moments of more accessible, amusing comedic brilliance.

Also realized perfectly is the over-arching love letter to the highs and lows of Hollywood, which still haven’t changed, even over half a century later. The magic of the movie industry is still intact, even as jokes are made about how much studios like to jump at shadows, and flail against imaginary boogeymen, as is still the case in this movie. Just as 1950’s Hollywood was paranoid about Communists, televisions and the increasing technical demands of colour filmmaking, 2016’s Hollywood stands petrified of the internet, the rise of streaming services like Netflix, and hell, even video games! That’s the irony between then and now though. All of those problems that Hollywood was worried about in the 1950’s never came close to destroying it in the end, and the Coen brothers seem to be using Hail, Caesar! as an allegory to make the same claim about how the Hollywood woes of 2016 will ultimately be laughed at in another fifty years, when Hollywood is no doubt still going as strongly as it ever was.

Not everyone will fully embrace the joke, nor will everyone understand the underlying vision that Hail, Caesar! is built upon, but even if the Coen brothers have made better, or even more accessible movies in the past, Hail, Caesar! is an amusing and creative comedy that film buffs especially should definitely check out. It’s a great testament to the enduring power and magic of Hollywood, both the good and bad of it, and ultimately, it’s a triumphant declaration that the glamour and weirdness of Hollywood will never be truly defeated, even long after the current studio nightmares of imagined foes in competing industries have ceased, and been replaced with fresh ones to come later.

Hail, Caesar! Review
Hail, Caesar! is not the Coen brothers' best movie overall, but it's still a fun and triumphant love letter to the magic of Hollywood from past and present, even if viewers outside of the film industry likely won't be able to grasp every joke.
CHARACTERS85%
PLOT80%
DIRECTION90%
THE GOOD STUFF
THE NOT-SO-GOOD STUFF
2016-02-20
85%Overall Score
Reader Rating: (0 Votes)
0%