NOTE: This review may contain mild spoilers for the first season of “Love.” With that said, the review is written to accommodate those who have not yet watched the season, and as such, will avoid discussion of any major plot developments.

After being dubbed the, “King of comedy” in the movie space, since breaking onto the scene in the mid-2000’s with The 40 Year-Old Virgin and Knocked Up, Judd Apatow has fully made the leap to the small screen with his latest offering, Love, a dramedy series that has joined Netflix’s ever-growing catalogue of original shows. A co-creation between Apatow and the show’s male lead, Paul Rust, whose best known acting credits are as the male lead in terrible 2009 teen romcom, I Love You, Beth Cooper, as well as a non-speaking bit part in Quentin Tarantino’s movie from that same year, Inglourious Basterds, Love, true to its title, is all about taking a sobering look at modern adult romance.

The show feels like it’s building upon Apatow’s recent interest in romantic comedies from the big screen, after Apatow collaborated with low-brow comedian, Amy Schumer for last year’s great Summer romcom, Trainwreck. In fact, to an extent, Love almost feels like a hybrid between The 40 Year-Old Virgin and Trainwreck in terms of how it’s presented, with the spirits of those movies’ leads somewhat channeled into the respective man and woman leading this series, albeit with a slightly more serious tone in contrast to both of those movies. It feels like Apatow, and probably Rust as well, had lots of ideas for new romantic comedies, but couldn’t realize any of them as full-fledged feature films. Thus, as a way around that, they instead came up with the idea to center these separate thoughts around the romantic journey of two unlikely companions in a Netflix series, with those being the neurotic, straight-laced nerd character, Gus, whom Rust portrays, and Mickey, a blunt, self-destructive addict played by Community’s Gillian Jacobs. 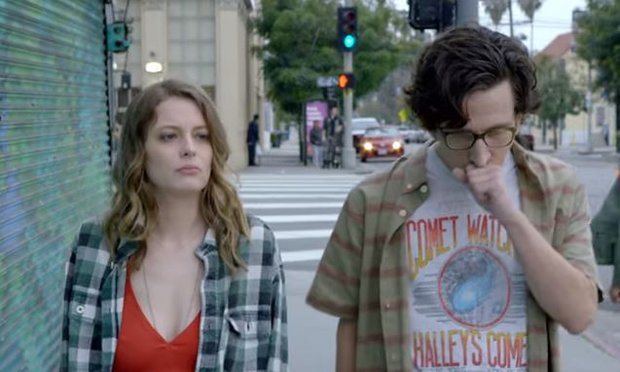 When you first watch Love, you’ll feel that you’ll quickly have a sense of who these people are. Gus is immensely awkward, and has a small, tight-knit group of friends, though many people outside of that group find him cloying to be around. On the flip side, Mickey is a lot cooler, being generally well-liked and admired for both her beauty and street savvy, though she is also far less stable, particularly due to her struggles with smoking, drinking, and constantly coming back to toxic relationships. Appropriately, both Gus and Mickey start the series in a relationship with other people, though by the end of the first episode, both of them have lost their partners, for opposing reasons. The two end up meeting completely by chance soon afterward, after their respective, “Shitty days” take them to a convenience store where they’re both seeking comfort.

Love smartly sets up their attraction, and effectively benefits from the seemingly outlandish, yet surprisingly reasonable idea of two polar opposites attracting and fascinating one another. At first, the series seems to be going along a predictable route here, with Gus becoming especially fixated on Mickey, who responds by trying to play it cool. As this first season’s ten episodes go on though, the show effectively digs deeper into these characters, and reveals that they may not totally be everything that they appear to be. They have fun together, and sometimes, they will talk and act exactly as you would imagine, though the big strength of Love is that its lead would-be couple truly feel like actual, warts-and-all human beings. Love and relationships are very messy, often unpredictable, and can be psychologically volatile, especially between people who are objectively emotionally stunted from any angle.

Because Love is most concerned about its relationship commentary above all else, the show’s humour is often very deadpan, and rarely does it try for conventional means of making the audience laugh. It’s far slower-paced compared to the chipper, attention-grabbing spirit of Unbreakable Kimmy Schmidt, and even the similarly understated Master of None ultimately has more energy than most of Love does. The first season’s final few episodes are especially dramatic as well, and almost completely abandon the pretense of comedy. Early on though, the show does mine some solid humour from the awkwardness that comes with feeling out a new human connection, though Rust’s character in particular may get on the nerves of some viewers, due to his outrageous social ineptitude that has him literally doing almost everything wrong with women. If you happen to enjoy humour based around extreme awkwardness, then you’ll get some good laughs out of Love, though if you’re put off by that kind of comedy foundation, then Love probably isn’t for you.

Fortunately, there is at least one standout funny character in the show, and that’s Mickey’s eccentric Australian roommate, Bertie, played by Claudia O’Doherty, who actually had a role in Trainwreck as well. Bertie is used very smartly in the series, and often comes on to the scene whenever Love is in danger of becoming too depressing or boring. Her relentless optimism and sense of goofy fun is very welcome, and in the process, O’Doherty ends up becoming the show’s most likable and memorable performer. She also serves as a great contrast to Jacobs’ more self-centered and unstable character, proving further how supposedly, “Damaged” Mickey can truly be at her worst.

Outside of Bertie though, Love does seem a little bit slanted towards being dramatic, which is especially surprising when one considers Apatow’s raunchy comedy background. Love still has some raunchy and goofy moments, but they’re often few and far between. Because of this, the show takes a few episodes to truly become interesting, and largely stands on the performances of Rust and Jacobs, who manage to compensate well enough for some of the early episodes’ writing being a little dry. It requires some patience to get into Love, especially if you’re expecting a standard love story (which Love really isn’t), but once you start really getting to know the characters, their story becomes a lot easier to invest in, and see through for the remainder of the ten episodes that comprise Season One.

Beyond the central budding relationship between Gus and Mickey, we also get some insight into their jobs, with Gus working on a television show, a fictional third-rate Charmed knock-off called, “Witchita”, as a tutor to a bratty young actress, played by Judd Apatow’s real-life daughter, Iris Apatow. There are some secondary plot arcs derived from the leads’ office hours, particularly with Gus, who is trying to get recognized for a spec script that he wrote for the series that he works for, while Mickey’s odd relationship with her psychiatrist radio host boss is also occasionally put into the spotlight. Ultimately though, the Witchita drama won’t grab viewers nearly as much as the central romantic arc will, and similarly, Love seems to abandon the conflicts at Mickey’s job towards the end, leaving a lot of those dangling plot threads unresolved by the end of the season. Even a big twist with Gus ends up being moot when it’s hastily reversed in the season’s final episode, with even the overall ending of the first season feeling equally gratifying and frustrating. Apatow and Rust are no doubt banking on the already-confirmed second season to continue building the story, but even so, it feels like they both wrote the lead characters into a corner towards the end, then didn’t have enough time to adequately get out of it within the ten-episode order of Season One.

Ultimately, the first season of Love has some flaws, and it might occasionally be too awkward and deadpan for its own good, though if you happen to enjoy unconventional romance stories, you’ll find that this first season is worth watching. This show feels like a bit of a downgrade from Aziz Ansari’s stellar first season of Master of None, which had a similar tone and some similar ideas, though Love still manages to carve a worthy niche within the Netflix catalogue. The upcoming second season could no doubt see some big improvements to the series’ handful of weak spots, but the first stages of Gus and Mickey’s offbeat romance succeed well enough at taking the gloves off and not being afraid to address the worst elements of human relationships, and why they’re nonetheless worth fighting for.

Love: Season One Review
Judd Apatow's and Paul Rust's new romantic dramedy series, Love is a good, if occasionally slow-paced commentary on the highs, and especially the lows, of human relationships, with its first season delivering a mostly satisfying and sobering look at the trials of connection.
THE GOOD STUFF
THE NOT-SO-GOOD STUFF
2016-02-22
81%Overall Score
Reader Rating: (0 Votes)
0%