NOTE: Full spoilers for this episode of “The Walking Dead” are present in this review

Well, I’ll be! It’s about damn time! Finally, after a pretty frustrating slump since slightly before the midway point of Season Six, The Walking Dead finally delivered a pretty great episode, and one that proved to be a pleasant surprise, given the horrendously frustrating midseason premiere last week.

“The Next World” finally had the show start pulling its head out of its ass, and focusing on actual, satisfying storytelling, rather than cheap scares, character trolling, and chasing the series’ tail to no end. This is why the episode felt like such a breath of fresh air. Its storylines were smart, and even surprisingly light-hearted at times, and it really gave focus to some of the series’ best characters simply being entertaining and developing their camaraderie with each other, while still introducing a big new personality that helps the series move forward toward the looming shadow of Negan and The Saviors.

Fans of the Walking Dead comics will be happy this week, since we’re introduced to Paul Rovia, a.k.a. “Jesus”, who chances upon Rick and Daryl during a supply run for things like pop and toothpaste. Yes, even the show’s supply runs have lightened up a bit, which pleasantly has the series switching tones from its usual one gear of ‘depressing’, to something almost resembling ‘fun’ again. Even the banter between Rick and Daryl is pretty amusing during their run, and Jesus functioning as a stubborn, slippery escape artist that the two basically chase around in a fight for a food supply truck, makes for a pretty satisfying story arc by itself.

If you have read the Walking Dead comics, then you’ll know how Jesus will likely start laying the groundwork for the show’s eventual introduction of big villain, Negan to come. If not though, he simply functions as an amusing lone survivor for now, and that’s fair enough. The chase between Rick, Daryl and Jesus even culminates in them losing their supply truck after a scuffle between Daryl and Jesus dislodges the parking brake, and has the truck rolling backwards into the nearby lake. Even then though, Rick convinces Daryl to take an unconscious Jesus back to Alexandria, with Denise looking after him while Rick goes home to tell Michonne about his day. 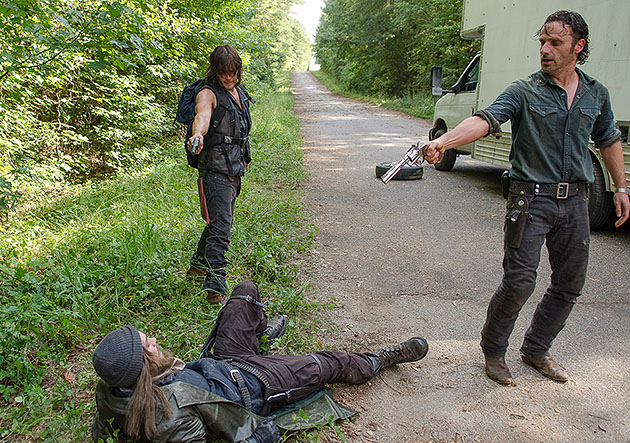 Oh, yeah, Rick and Michonne are a couple now. Seeing as this episode takes place several weeks after the events of the midseason premiere, I suppose that they finally acknowledged the sexual tension that we all knew was brewing between them off-screen at some point. It’s a pretty satisfying new development, even if it does confirm one of my many gripes with the midseason premiere from last week, in that the show has, just as I predicted, already forgotten about the Anderson family, especially Jessie, and has rendered all of their deaths meaningless. Instead, Rick has already shacked up with Michonne, and he might as well have not had any kind of relationship with Jessie at all in the end. That said though, it was pretty funny to end the episode with Jesus escaping captivity, again, before approaching a naked Rick and Michonne in bed, who leap out in the buff with weapons outstretched, as Jesus tells the two that they should talk. Boy, I really wish that The Walking Dead would lighten up like this more often. It can be pretty entertaining when it’s not trying so hard to be edgy and shocking all the time!

Michonne also got a subplot, by the way, and another surprisingly decent one. Carl and Enid also somewhat played a part in it, as they wander around the woods outside of Alexandria, eventually stumbling upon a lone mysterious Walker that Carl refuses to put out of its misery. Later, when Michonne approaches Spencer, who is wandering around the woods with a shovel for some mysterious reason, they discover the same Walker, who turns out to be Deanna! This was a nicely melancholy scene, as Michonne watches Spencer put his mother to rest, before the two bury her together, with Michonne marking a nearby tree as a grave site.

This served as a fitting and satisfying end to Deanna’s ambiguous, though seemingly inevitable fate after she found herself bitten, and fighting off a legion of Walkers during the Alexandria invasion back during the midseason finale. The only slight sticking point is that the presence of Enid felt kind of unnecessary in the end, even as the show tries to make a brief aside of Maggie urging Enid to come to her for friendship and trust. So, things haven’t changed for Enid then? Then why bother even including her in this episode? Carl might as well have been wandering around the woods by himself.

Still, I’m thrilled to see that The Walking Dead is starting to get on the right track again, and its experimentation with a lighter tone for this episode certainly proved to be very successful. The episode’s big developments all felt inspired and satisfying for once, between the introduction of Jesus, and the new Rick/Michonne relationship (even if Rick and Michonne are just friends in the comics), resulting in storytelling that was pretty enjoyable overall. This is what happens when The Walking Dead doesn’t strain to be needlessly exploitative and melodramatic. The storylines feel more natural, and the entertainment value of the show becomes a lot higher. In turn, this also helps the shocking, melodramatic moments have more impact, when the show isn’t just stuck on that one emotional gear for its entire duration. Not bad, The Walking Dead. Perhaps there’s hope for you yet on the airwaves!

The Walking Dead 6.10: "The Next World" Review
The Walking Dead improved immensely this week, finally ditching its frustrating need to troll and be exploitative for once, and instead successfully experimenting with a lighter tone that led to more satisfying and inspired character arcs overall.
THE GOOD STUFF
THE NOT-SO-GOOD STUFF
2016-02-22
88%Overall Score
Reader Rating: (0 Votes)
0%