Microsoft has confirmed which Games with Gold freebies will be offered to Xbox Live Gold members this coming March.

The new game rewards will begin going live in exactly a week from now, on Tuesday, March 1st, which will be the same day that Sony’s competing free PlayStation Plus rewards selection will be due. At that point, February’s free Games with Gold rewards will return to their original paid prices for Xbox Live Gold members. Thus, if you have yet to redeem Hand of Fate on Xbox One, or Gears of War 2 on Xbox 360, you have until then to do so. Styx: Master of Shadows will remain free on Xbox One until March 16th, at which point, it will be replaced by March’s second free game reward on Xbox One.

Without further ado then, let’s see which Games with Gold selections will be on offer for this March:

To start, on Xbox One, Sherlock Holmes: Crimes & Punishments will be offered free to Xbox Live Gold members for the entire month of March. A mystery-adventure game that unfolds from the perspective of Sir Arthur Conan Doyle’s famous super-sleuth between the years 1894 and 1895, players must solve several new cases, identifying criminals that they can elect to either punish or forgive, as an added new wrinkle to gameplay. The game received primarily positive reviews when it released back in 2014, particularly in regards to its storytelling, which was viewed as being very true to the amoral side of Sherlock Holmes’ character. Sherlock Holmes: Crimes & Punishments is also available for PC, PlayStation 4, Xbox 360, and PlayStation 3.

The second free Xbox One reward, which will be free between March 16th and April 15th, is Lords of the Fallen. An action-RPG inspired by the likes of Dark Souls, with more forgiving gameplay, Lords of the Fallen has players taking control of Harkyn, a hero that aims to stop the evil forces of a vengeful god, who has been dethroned from a fantastical world. Lords of the Fallen received mostly good reviews when it first released in 2014, with its more accessible gameplay and production values being particularly praised, even if it was criticized for a few technical issues and some underwhelming boss encounters. Lords of the Fallen is also available for PC and PlayStation 4.

Next, the first free Xbox 360 reward for March, which will be free between March 1st and March 15th, is Supreme Commander 2. A large-scale real-time strategy game that unfolds across multiple campaigns, after the newly-elected president’s assassination, Supreme Commander 2 plunges a near-future world into war. The game received decent feedback when it first released in 2010, with its increased accessibility being commended, though it was criticized as dumbing down the more hardcore strategic elements that made the first game such a big surprise hit. Supreme Commander 2 is also available for PC and Mac.

Lastly, the second free Xbox 360 reward for March will be Borderlands, which will be free between March 16th and March 31st. The original shoot-and-loot first-person shooter/action-RPG hybrid from 2K Games and Gearbox Software, Borderlands has players taking control of one of four ‘Vault Hunters’ on the faraway planet of Pandora, who seek fame and fortune as they pack a legion of potential firearms and goodies to wield against the beasts and psychos of the wasteland! Borderlands has received high acclaim since it first released in 2009, with its co-op gameplay, deranged art style and innovative blend of FPS and RPG mechanics all being praised, even if it was sometimes criticized for the lack of depth in its story. Borderlands is also available for PC, Mac and PlayStation 3. 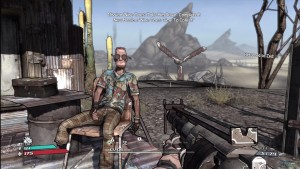 Considering the somewhat disappointing selection we got last month, this month represents a big improvement for Games with Gold freebies. There aren’t really any real disappointments in this latest selection, which marks a welcome improvement from some of the lacklustre games that Microsoft has forced Xbox Live Gold members to accept since the end of last year, and the fact that all four of these games are full-fledged retail offerings is an especially huge treat! Lords of the Fallen and Borderlands are especially great to snag for free, though Sherlock Holmes: Crimes & Punishments and Supreme Commander 2 are also very worthwhile freebies that gamers will easily enjoy.