NBC’s freshman comedy, Superstore recently wrapped its first season (though the televised airing of Season One’s final episode here in Canada won’t take place until Friday on Global), and NBC has wasted no time giving the well-received workplace sitcom an early renewal. Superstore will return for Season Two, and will no doubt join NBC’s Fall lineup later this year when the show’s new season comes to the airwaves. 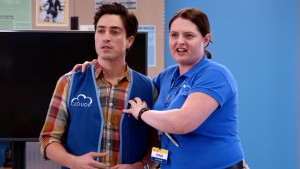 Superstore debuted late last year, as part of a special ‘advance look’ promotion that saw the first three episodes aired early, and in the case of Canada, they were exclusively made available on Global’s website, and the Global TV app for mobile devices. The show’s proper syndicated debut on NBC in the U.S. and Global here in Canada, took place at the start of this past January, with the first season lasting a total of eleven episodes. The original Season One order for Superstore was for thirteen episodes, though due to NBC’s overcrowded midseason schedule, two episodes were removed from the order, since Superstore was one of two shows that hadn’t finished filming at the time of NBC deciding their midseason lineup.

In its first season, Superstore was a huge success in the ratings, becoming NBC’s highest-rated new comedy in two years, and ultimately placing as the third-highest-rated new comedy of the current season on the four major TV networks, within the 18-49 audience. Despite more lukewarm reviews in its advance episodes, the series went on to receive much more enthusiastic reviews when its proper syndicated run had begun (including from us in our weekly coverage!), with the lead ensemble, great humour and charming balance of real-life work drudgery with lovable minimum-wage antics all being praised, ultimately making the series one of the best-received new comedies of the 2015/2016 season.

Superstore airs on Mondays in the U.S., on NBC, and is available to stream from Global’s website and mobile app on Mondays here in Canada. Syndicated episodes air on Fridays here in Canada, once again on Global. We will be returning to provide weekly coverage of the series for its remaining Season One episode, as well as its overall seasonal verdict for Season One, and will also return for weekly coverage when Season Two likely begins airing later this year.

Keep shopping Eggplante for all major news and updates on Superstore.