After achieving a new high point last week, Lucifer seemed to fall back into some old habits this week. The show’s procedural element once again became tedious, and had to be salvaged by both the presence of Lucifer himself, alongside the developing dynamic between Amenadiel and Maze, with the former pushing his story forward in a pretty surprising way this week.

All the while, Lucifer is continuing to become fascinated by what appears to be his ever-increasing mortality. Attending a sultry fashion show with Maze, Lucifer muses about how much more thrilling life is when he has the possibility of being hurt, and possibly even being killed, which Maze is naturally against. Of course, as usual, trouble doesn’t take long to find Lucifer, as a gun is fired into the crowd of the fashion show, just in time for Lucifer to get his kicks on with one of the models. After a young woman ends up trampled to death, Lucifer decides that he’s found his danger again, and shows up at the LAPD offices, just in time to sweet-talk Chloe’s lieutenant into yet again allowing him to work the case. 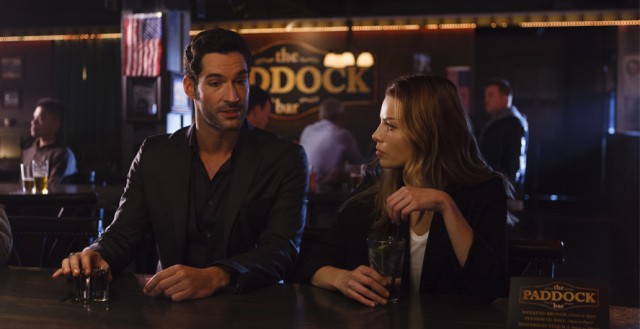 There is some funny material gleaned from Chloe shooting Lucifer in the leg last week, though there doesn’t seem to be any real consequences suffered from that, even when Lucifer shouts it in the middle of the precinct. Still, Chloe takes the opportunity to indulge Lucifer’s desire to explore his mortality, namely by slapping him, and keeping an ever-tighter leash on him. She even locks him inside a car when she’s about to interrogate key witnesses in the murder, though Lucifer finds a way out again. I’m surprised that Chloe hasn’t undergone psychiatric leave yet, frankly, given Lucifer’s continued antics.

Anyway, this latest case-of-the-week is a step down from the surprisingly good one last week, and yet again goes back to the show’s usual standard of dull, predictable murder cases. The show is still telegraphing its case resolutions too much, despite making an effort to add twists and turns. Turns out, the gunfire was intentionally orchestrated by the supposed victim, as a publicity stunt to make him more famous, with the guy framing his former best friend (after already having him take the fall for another crime in the past), and many viewers will no doubt anticipate this in advance. Lucifer never ends up in real danger as well, even if his charm ends up being useful, and all in all, the case-of-the-week just completely fails to engage. It’s too bad, because last week seemed to create the possible impression that Lucifer might have been slowly starting to figure out its procedural side.

At the very least, the show cuts the crap towards the end, and finally just has Lucifer become a full-fledged civilian consultant for the LAPD, just in time for him to set the lieutenant on the path to becoming the first-ever female police chief. This is a bit of a relief, since the show can stop trying to find increasingly laboured excuses to stick Lucifer with Chloe every time there’s a murder in Los Angeles. Hopefully, this also means that the show’s cases will once again start becoming more interesting too.

Fortunately, as I said, the developing Amenadiel/Maze dynamic continues to be a high point for this show. Maze continues to conspire with Amenadiel, in an effort to bring Lucifer back to Hell, and Amenadiel even enacts a plan to pose as a psychiatrist that works across the hall from Linda! There’s unfortunately no Linda/Lucifer interactions this week, but the promise of Amenadiel seducing Linda to get dirt on Lucifer is a tantalizing one, especially when it would theoretically go against Amenadiel’s charge as a messenger of God.

Maze stood out even more this week though, and likely had her best episode yet here. She got a pretty cool scene of showing her demonic fighting skills when Lucifer ends up in a bind at one point while working his case, though her real standout scenes came later. The highlight of Maze’s role this week came when she crept into Chloe’s house and watched her sleep after the murder was solved. We even get a quick glimpse of Maze’s true demonic face as she looks at Chloe, almost like a meal. It’s an effectively creepy sequence, and one that suggests that Chloe could very well become collateral damage in the divine struggle to return Lucifer to the underworld, especially since both Maze and Amenadiel are getting increasingly desperate to restore Lucifer to his station in Hell.

“Sweet Kicks” was a pretty by-the-numbers episode of Lucifer, being reasonably entertaining, though not really standing out in any real way. The material with Maze and Amenadiel fared a bit better, and at least the show finally just made Lucifer a bona fide LAPD consultant in the end, though the procedural element is once again back to mediocrity, and Lucifer himself has returned to feeling excessively shackled by the boring police material. I find myself hoping that next week’s episode might feature more of the divine side of this show’s world, since many viewers have no doubt had quite enough of the tedious focus on Chloe’s police work by now.

Lucifer 1.5: "Sweet Kicks" Review
Lucifer falls back into old habits this week, delivering a by-the-numbers episode with the usual bright spots and weaknesses of this series, as another tedious case-of-the-week is run through, and Maze and Amenadiel both nicely punctuate the better story elements.
THE GOOD STUFF
THE NOT-SO-GOOD STUFF
2016-02-23
74%Overall Score
Reader Rating: (1 Vote)
99%