With Jimmy ushered into his cushy new job at Davis & Main, and Mike finding his hands full dealing with the ineptitude of Pryce, Better Call Saul seemed to move a bit further into more light-hearted territory this week, with an extra heavy focus on the supporting characters to boot. Chuck even returned to the series this week, after sitting out the season premiere last week, and all is definitely not well in the McGill family, after his return.

A good chunk of the episode dealt with the absurd plotline of Pryce’s stolen baseball cards, a situation that Mike is actively rolling his eyes at to boot. Despite Pryce supposedly dismissing Mike from his services, Pryce comes all the way back to him, since the police station happens to be in the same parking lot that Mike works at as a parking attendant, and Mike takes the opportunity to warn him not to talk to the police. As expected though, Pryce isn’t willing to listen to reason. 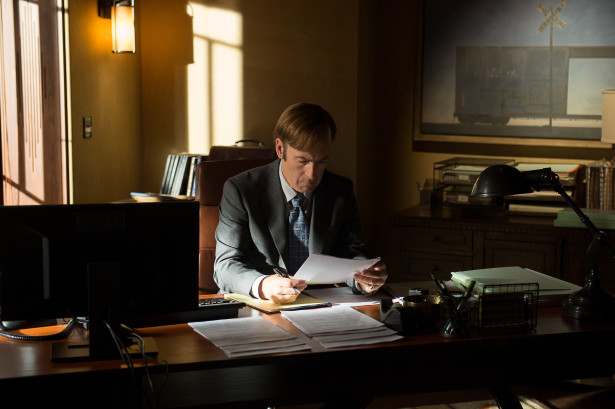 Pryce’s incredible incompetence at being a criminal has to be seen to be believed. He gets the police on his trail, and even then, Mike has to put himself into Nacho’s crosshairs by tracking him down at his civilian job. Mike demands the return of the cards, under threat of tipping off Tuco to Nacho’s little side venture. He does however add a $60,000 boon for Nacho in exchange for the cards though, which happens to be Pryce’s hilariously ill-advised vehicle.

It seems like everyone then gets what they want after that, with Pryce getting his cards back, even at the cost of his car, while Mike gets to relax at most of the heat being taken off him. It’s still not quite enough though, so he calls in Jimmy to clean up the rest of Pryce’s mess. Naturally, Jimmy can’t stay away, despite his life really coming together, and even his relationship with Kim starting to blossom.

This led to a fantastic old school Saul Goodman moment, even pre-Saul Goodman, as Pryce futily tries to deflect the police’s suspicion as to the secret cubby in his house, before Jimmy kicks him out of the room, and then feeds the cop a hilarious bullshit story about what’s meant to be in the cubby hole, which has to be heard to be believed. Off the top of his head, Jimmy claims that the secret hideaway is meant for an embarrassing stash of fetish videos, which Pryce films for a non-existent rich man in exchange for generous payouts. The fetish? Sitting in a pie while in costume, and crying. Again, it has to be heard to be believed, but the way that Jimmy sells it, you can’t help but believe it. It’s really quite astounding, not to mention very funny!

Kim however, doesn’t find the information to be quite so humourous. As she and Jimmy share a pie together, and Jimmy recounts the story to her, he eventually lets slip that he filmed a fake video to confirm his story to the cops. Kim is disturbed by this revelation, since it means that Jimmy forged evidence, something that didn’t even seem to occur to him as he was telling the story. Kim implores Jimmy never to tell her about anything like that again, which causes some friction between the two, though likely nothing fatal for their relationship at this point. Still, Better Call Saul once again effectively offsets a fun and silly moment with a hard, sobering punch of reality, reminding us that Jimmy is not a smooth talker that we should ultimately aspire to be.

At the same time, Chuck also makes his return to Hamlin, Hamlin & McGill, to start sitting in on the Sandpiper case, which Jimmy continues to make great headway on. Already, you can sense a very quiet, but very noticeable building animosity between the two brothers. As I said more than once during my Season One coverage, Chuck is no doubt a key instrument in the fall of Jimmy McGill, and it would be fascinating to see an even bigger betrayal than Chuck has already put into motion ultimately be one of the biggest foundations for Saul Goodman. Perhaps Jimmy’s respect for his brother could be his main undoing, even more so than his jobs for Mike, or his past as a con man? Whatever the outcome, Chuck’s presence in the Sandpiper case is definitely not good for Jimmy at this rate. 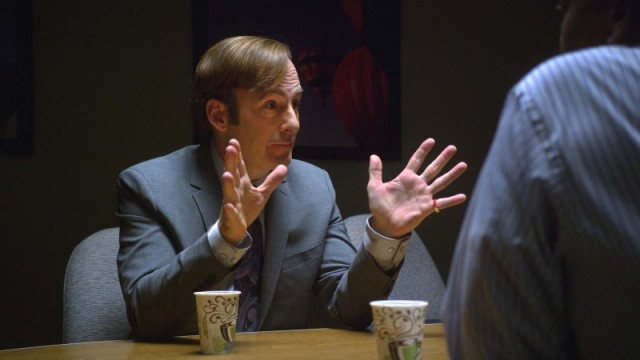 Better Call Saul remains very strong in its latest episode, and this more light-hearted, ensemble-focused offering brought some great doses of pitch black comedy, which still ended with the heart-wrenching reminder that Jimmy McGill is a man that’s ultimately doomed to lose whatever success he’s enjoying at present. The episode was quite a lot of fun, but the true tragedy of Saul Goodman is that the fun, careless and conceited amorality is not infinitely sustainable. Eventually, even Jimmy McGill will find himself facing a problem that he can’t talk his way out of. Not everything can be solved with a fictional pie fetish claim, after all!

Better Call Saul 2.2: "Cobbler" Review
Better Call Saul provided an outstanding dose of darkly fun and enjoyable ensemble dynamics this week, though the diminished emphasis on Jimmy still led to a fun and tragic climax with Pryce, along with an unsettling return by Chuck.
THE GOOD STUFF
2016-02-23
91%Overall Score
Reader Rating: (2 Votes)
98%