NOTE: Full spoilers for this episode of “The Flash”, including the true identity of arch-villain, Zoom, are present in this review

Even with the landmark Earth-Two storyline seemingly wrapped for now, The Flash still hit a superb high note this week, with, “King Shark.” As the episode’s title suggests, it features the return of the infamous half-man/half-shark DC villain, though this episode also marked so much more than that. On top of being a fantastically emotional offering, and one that nicely topped off the show’s renewed direction before it takes a hiatus for the next month, this episode also finally gave us something that viewers have been on the edge of their seat for since the season started; The true identity of arch-villain, Zoom!

Before that though, let’s start with the obvious; King Shark escapes! This resulted in a cool crossover bit with Arrow, as Diggle and Lyla guest star in this episode, making their way to Central City to warn Barry that King Shark broke out of his confinement at A.R.G.U.S., and is continuing with his mission to kill The Flash for Zoom. Apparently, Amanda Waller was experimenting with metahumans off the books (a great tease for both The Flash and Arrow regarding possible directions for future seasons), and King Shark was among the experiments she had secretly salvaged and hidden in an off-the-books facility.

King Shark was already one of the cooler effects-driven metahumans from earlier in the season, and his presence here doesn’t disappoint, now that he has a full-fledged turn as a proper villain for The Flash. He’s a great monster, especially on a television budget, and his hulking exterior and tendency to outright devour his prey is nicely gruesome, without offending the network censors. The action scenes that feature him combating Barry are also pretty good, albeit slightly CG-heavy. Nonetheless, it’s satisfying to have Barry take on a more larger-than-life metahuman, rather than just another fully human person that happens to have another random batch of powers on any given week.

As great as the action and thrills with King Shark were though, this episode also excelled on the emotional front, particularly in how it dealt with the apparent death of Jay. It really is looking like Jay has indeed been killed off, though there still seems to be some wiggle room, especially in the epilogue scene that finally tells us who Zoom really is underneath his mask, or at least mostly tells us. Barry and Caitlin are particularly affected by Jay’s death, and Wells warns both Barry and Cisco not to discuss the matters of Earth-Two with Caitlin, Iris or Detective West. Obviously, they both end up spilling the beans.

This was actually a standout episode for Grant Gustin’s acting talents, as Barry emotionally recounts his time on Earth-Two to Iris and Detective West, revealing his Earth-Two doppelganger’s marriage to Iris, as well as West’s life as a lounge singer, along with the fact that he was ultimately killed by Zoom’s minions, without identifying them as the Earth-Two renditions of Ronnie and Caitlin. Gustin had more than one standout scene this episode, as he made Barry genuinely tormented and scarred from the events of Earth-Two, affecting The Flash’s behaviour throughout the entire episode. This also allowed the show to justify the appearance of Diggle and Lyla to boot, who aren’t just there to clean up the mess of A.R.G.U.S., but also coach Barry through the process of grief, doubt and courage not just as a hero, but as a soldier, and that’s awesome. 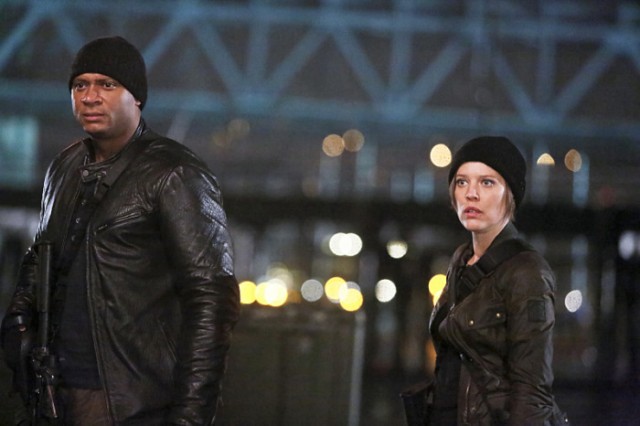 Caitlin also takes a bit of a dark turn this episode, also burying herself in her work, and finding herself intentionally becoming cold and detached from her peers in the hunt for King Shark, with the show immediately taking on the nose the obvious question; Could the Earth-One Caitlin, the Caitlin we know and love, possibly become Killer Frost in this world? Cisco even directly asks the question, once he finally tells Caitlin that her Earth-Two doppelganger was an evil metahuman in the service of Zoom, though Caitlin explains that her anger and grief is being bottled for a reason, since she can’t let it out, or else it would never stop coming, now that she’s lost both of the men that she’s loved. Apparently, Caitlin doesn’t even have the metahuman gene either, though that doesn’t necessarily leave her out of the woods. After all, there’s more than one way to get ice powers in the DC Universe…

Regardless, after some scientific ingenuity, King Shark is eventually caught, and Diggle and Lyla vow to find a cure for him. All seems to be well in the end, with Barry even rallying the S.T.A.R. Labs crew together, fessing up to his choices when he chose to try and selfishly save his mother towards the end of Season One, and nonetheless saying that he will own those choices. Barry claims that the team is not done with Earth-Two, or Zoom, and that they must be prepared for the breaches to re-open, and Zoom to attack again. It was a very satisfying note to end the episode on, before the show goes on to hiatus, and it keeps The Flash building a sense of momentum, despite the path to Earth-Two seemingly shut at the end of last week’s episode.

Even Wally was put to pretty great use in this episode, despite his story arcs being a little mixed since the show introduced him for the midseason finale last year. Detective West encourages Barry and Wally to hang out and spend time together, since Wally is now as much a part of the West family as Barry is. This is a neat nod to the two being separate incarnations of The Flash in DC Comics lore, and the friction between the two feels natural, without becoming tedious. Barry of course tries to hijack Wally’s revolutionary design idea for a new biofuel engine, which initially leads to Wally storming out, though later, he tells Detective West that Barry’s ideas helped him perfect his design. Perhaps it was an overly neat conclusion to the idea of Barry and Wally having some distrust to overcome, but it’s good to have the show finally establishing Wally as someone other than a misunderstood delinquent.

But, all of this seems to pale in contrast to the reveal of who Zoom really is. Right as the episode ends, we see a shift to Zoom’s lair on Earth-Two, where the masked man looks on in horror (and is now confirmed to have green/blue eyes, along with blond hair), as Zoom dumps the body of Jay in front of him. Zoom then talks about Jay’s death being a complication, shortly after removing his mask, to reveal that he’s… Jay?! Or, more likely, Hunter Zolomon, the Earth-One incarnation of Jay, who Zoom actually is in DC Comics lore. This may disappoint some DC fans who were hoping for a curveball, though given the doppelganger situation, it’s possible that there may be more of an explanation than this when it comes to Zoom’s motivations. Whatever the case, this is another smart way to end the episode before the show’s hiatus, as the reveal of Zoom’s identity will no doubt have fans easily buzzing until The Flash returns on March 22nd.

“King Shark” was another outstanding episode of The Flash in pretty much every respect, and didn’t really have any real weaknesses in the end. The action and visuals were stylish and fun, the emotion and drama was very heartfelt and satisfying, and the performances of Grant Gustin and Danielle Panabaker were particularly exceptional this week. The Diggle/Lyla crossover with Arrow also proved to be pretty effective, as did the chance to finally learn who is really under Zoom’s mask. It’s a bummer that we’ll have to wait several weeks to pick up the battle against Zoom again, but we couldn’t have asked for a better episode to end on before the break!

The Flash 2.15: "King Shark" Review
The Flash delivered another outstanding episode with the return of King Shark, which was great enough in featuring the titular villain, though also excelled with standout drama, superb writing, and the long-awaited reveal of Zoom's apparent identity!
THE GOOD STUFF
2016-02-24
95%Overall Score
Reader Rating: (0 Votes)
0%