Brooklyn Nine-Nine seems to be cooling down after its recent string of especially great episodes, with last week’s being a merely solid offering, rather than a great one, and that seemed to continue this week. “Adrian Pimento” was another episode that was merely decent in the end, rather than great, though it still managed to deliver enough laughs to make its middling story arcs watchable.

The main arc of the episode comes from an undercover cop returning to the Nine-Nine, after twelve years of working undercover for one of the most dangerous mobsters in New York. Adrian Pimento, played by Jason Mantzoukas, is comically unstable and unpredictable, and always seems a hair’s breadth away from snapping and losing his sanity. This of course has Peralta eager to work with Pimento, since Peralta still takes a lot of pride in his own undercover stint between Season One and Season Two, though Holt advises against it at first, since Peralta’s immaturity and lack of foresight is definitely the last thing that Pimento needs to be dealing with. 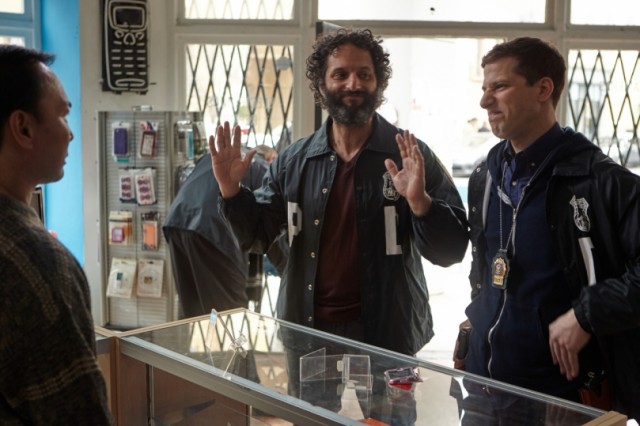 Nonetheless, Peralta successfully gets Pimento to work alongside him on his B&E case, and this goes about as well as imagined. There’s some amusing scenes derived from Pimento’s insanity, and Jason Mantzoukas proves to be a funny guest star, in fairness, though many of the jokes feel like they have predictable punch lines. Pimento is somewhat based on a one-note joke, since he’s very far removed from the idea of normalcy, and that’s the entire joke. It’s kind of funny, though it would have been funnier, had Pimento acted perfectly natural at times, and simply had intermittent bouts of rage or insanity that could come at any time, so audiences wouldn’t know when to expect it.

Still, the episode had an interesting resolution for this storyline, as Peralta begins to gradually trust Pimento less and less, with Diaz further warning him that Pimento can’t be trusted, since she’s attracted to him, and she’s only attracted to creeps. I’m not sure how Marcus Holt fits into that attitude, but whatever. Again, some amusing scenes are derived from Diaz being hot for Pimento, but in the end, the real shock came when Pimento turns out to be on the level, and was simply trying to protect his family from his former mob connection, hence why he was sneaking around and seemed to have a big inventory of hidden goods. This might have had more impact, had Pimento permanently left the department because of Peralta’s distrust, but ultimately, Pimento returns to the force (can he just do that after quitting?), just in time for Peralta to make his B&E bust. All’s well that ends well, sure, but it seems like there weren’t any consequences of note for the Pimento plot unfortunately, beyond Peralta having to confront that his own time undercover doesn’t compare to the drawn-out, horrible experience of Pimento, which doesn’t really add anything to the show.

There was also some decent humour involved in the subplots, though again, mostly meeting par, rather than exceeding it. One of the subplots actually decently ties into the Pimento storyline, as Boyle decides to welcome Pimento back to the precinct with a special stew, which he orders and prepares with questionable ingredients and appliances. When the stew explodes, Boyle, at the behest of Santiago and Jeffords, is forced to seek the aid of, “Mean Marge”, the head janitor of the Nine-Nine, played in a guest role by The Office’s Kate Flannery. 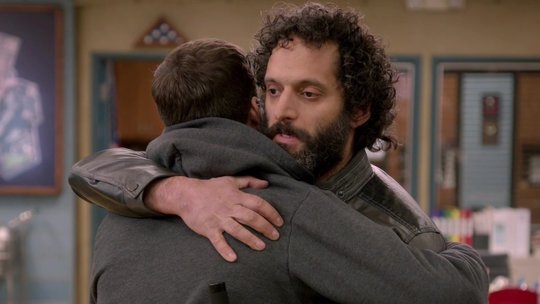 Predictably, Mean Marge is not too helpful, and after being insulted by Boyle’s mess, she even goes as far as to suspend the garbage service to the building. This makes the precinct a pig sty, though this does also nicely set the stage for the Gina subplot, after Holt hires her to film a brief informational video that Holt can present for upgrades to the office equipment. Apparently, Diaz is also being asked to help.

Gina remained one of the funniest characters on Brooklyn Nine-Nine this week, as she predictably gets lost in her own ridiculous vision, much to Holt’s chagrin. One of the episode’s funniest moments is when Gina hires actors to portray a fake Holt and Diaz, when she’s dissatisfied with the real Holt and Diaz not wanting to deliver the movie she wants. Even then though, Gina eventually capitulates to Holt’s demands, realizing that the most liked dogs on the internet are the most pathetic ones, so she just films the garbage-filled precinct with some dubbed Holt lines. This gets Holt the upgrades he needs, though at the cost of the fake Holt promoting Gina to a sergeant. I can’t say that this is a loss for the Nine-Nine, even if it’s bound not to stick by next week.

The Mean Marge plot similarly resolves itself pretty cleanly, with Boyle, Santiago and Jeffords resolving to name the break room after Marge. Again, they can just do that? This seems to satisfy her at first, though Boyle ends up popping champagne that shatters a window and sprays all over the place, before putting the bottle down to collapse the rack and create an even bigger mess. Womp womp. Again, this feels like a predictable, low-hanging fruit for a joke about pissing off the janitor, but at least the charm of these characters still manages to elicit some chuckles, even if the show usually has more creative writing than what it showed this week. 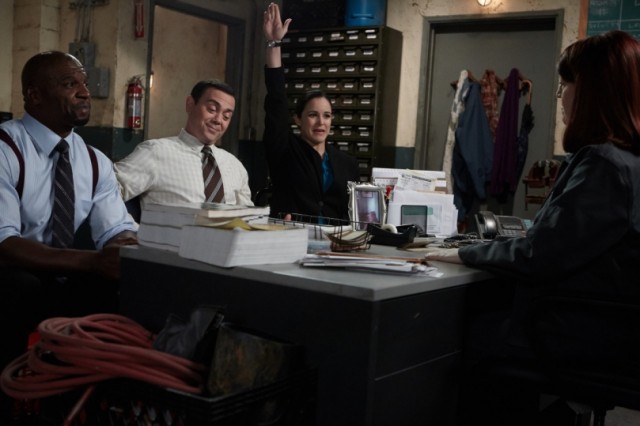 The most creativity in “Adrian Pimento” seemed to be reserved for the Gina/Holt plot, where Gina’s reliable eccentricity yet again elevated the episode. The other plots had the usual standard of laughs and charm for Brooklyn Nine-Nine, though nothing particularly stood out, especially with the show seeming to telegraph most of its punch lines in advance this week. Even filler episodes of Brooklyn Nine-Nine are a cut above most competing primetime sitcoms, but the show still seems to be settling into a less eventful stretch for now. I suppose it’s bound to happen, and at least a good amount of laughs are still present, though it’s also difficult to escape the feeling that many viewers are well aware that this show can do better.

Brooklyn Nine-Nine 3.17: "Adrian Pimento" Review
Brooklyn Nine-Nine continued to settle into a more comfortable, less noteworthy groove this week, as a traumatized undercover cop returns to the precinct, and both Boyle and Gina end up creating quite a lot of headaches for their superiors.
THE GOOD STUFF
THE NOT-SO-GOOD STUFF
2016-02-24
73%Overall Score
Reader Rating: (0 Votes)
0%