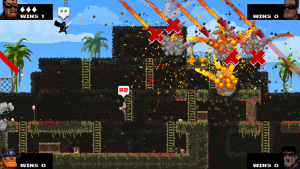 The new freebies will go live this coming Tuesday, March 1st, the same day that Microsoft’s next competing batch of free Games with Gold offerings will go live on Xbox platforms. At that point, February’s PlayStation Plus game selection will return to its normal paid pricing for PlayStation Plus members. Thus, if you have yet to redeem Nom Nom Galaxy, Helldivers: Democracy Strikes Back, Grid: Autosport, Persona 4 Arena Ultimax, Lemmings Touch, or Nova-111, you have until then to do so.

Without further ado then, let’s see which games PlayStation Plus members can look forward to this coming March:

First, on PlayStation 4, Broforce will be offered, with the game winning Sony’s latest ‘Vote to Play’ contest, beating out Action Henk and Assault Android Cactus, both of which will be sold at a discount next week for PlayStation Plus members. Sold for the first time on PlayStation 4 on March 1st, Broforce is a side-scrolling run-and-gun game that first launched on Steam Early Access, and has since launched its complete version on PC, Mac and Linux. Broforce is a love letter to the action-packed excess of 80’s action media, as players enlist the strikingly nostalgic personalities of Broforce to blow shit up, and have fun doing it! Broforce has enjoyed positive feedback since launching on Steam, with its action-packed, retro throwback gameplay getting a lot of praise, as well as its amusing 80’s throwbacks with its personalities.

The second PlayStation 4 reward for March will be Galak-Z. Originally sold as part of Sony’s PLAY 2015 spotlight of Summer indie games on the PlayStation Store, Galak-Z is a retro anime-inspired roguelike free-roaming arcade-style shooter, with players journeying across space in their customizable craft to take on enemies, with a VHS-style presentation. Galak-Z received positive reviews when it first launched last year, with its slick controls and engaging combat being especially praised, even if its sometimes-punishing difficulty was a point of contention amongst some critics and audiences. Galak-Z is also available for PC, Mac and Linux.

Next, on PlayStation 3, the first reward for March will be Super Stardust HD. An Asteroids-inspired shooter by Sony and Housemarque, this PlayStation 3-exclusive arcade throwback has players piloting a spacecraft across a planet-like surface, and blasting away asteroids and debris before their ship is destroyed by it. Super Stardust HD received huge critical acclaim when it first released in 2007, with its flashy visuals and chaotic gameplay getting a lot of praise, leading to the game being considered to be the then-fledgling PlayStation Store’s first truly must-play digital exclusive. Super Stardust HD was also eventually re-released on PlayStation Portable in 2008.

The second PlayStation 3 reward for March will be The Last Guy. A top-down shooter with a zombie theme that’s exclusive to the digital catalogue on PlayStation 3, players take control of the titular ‘Last Guy’, who must fight through hordes of undead monsters, rallying survivors, and eventually reaching an exit. The Last Guy was praised for its engaging challenge and healthy replayability when it first released in 2008, even if some felt that it would have been a true classic if it had more content.

Finally, the first PlayStation Vita reward for March will be Flame Over. Yet another top-down-style shooter, this time placing players in control of a firefighter with a rather overzealous hose, players use their hose to tear through the flames engulfing various levels rife with different hazards, in turn randomized by a roguelike design. Flame Over received merely decent reviews when it launched in 2015, with its creative premise and fiery gameplay being praised, though its punishing difficulty and overwhelming presentation were also criticized. Flame Over is also available for PC, as well as PlayStation 4, though is sadly not cross-buy in its PlayStation incarnations.

Lastly, the second free PlayStation Vita reward for March will be Reality Fighters. An augmented reality fighting game that’s exclusive to PlayStation Vita, Reality Fighters allows you to scan your own likeness into the game, effectively giving yourself the ability to take on hordes of opponents from around the world. Reality Fighters received middling to sub-par reviews when it released in 2012, with its ideas being praised, though its flimsy gameplay, unreliable AR capabilities, and minimalist presentation were all criticized.

This is a pretty decent month for PlayStation Plus, even if Microsoft definitely has it beat with their own selection of Games with Gold offerings for this March. Still, Broforce is a great freebie that is overdue for release on PlayStation 4, and Galak-Z, The Last Guy and Super Stardust HD are also fantastic indie offerings in their own right! The PlayStation Vita rewards this month are significantly less impressive unfortunately, with Flame Over being an acceptable offering, though Reality Fighters, the sole retail game offering for March, is a weak reward that many PlayStation Plus members are bound not to have much interest in.