Agent Carter already delivered yet another standout episode in the first of two offerings this week, though its second offering, “A Little Song and Dance”, didn’t disappoint either! The season’s penultimate episode nicely built towards a very exciting climax, as Whitney’s machinations reach their final stages, and Peggy’s crew must rally themselves for the final battle against the Zero Matter menace.

Things start off on quite a different note however, as the episode begins with Peggy in dream land, after being knocked out by Joseph Manfredi’s thugs alongside Jarvis. What follows is an odd, though undeniably fun musical number, putting a happy spin on Peggy’s emotional turmoil, as she continues to try and come to terms with Wilkes’ betrayal, along with her resurfacing feelings for Sousa. It’s a nice little aside, even if it doesn’t really serve any purpose in the plot, and merely feels like an excuse for cameos by the likes of Dottie, and even Angie, Peggy’s waitress friend from Season One. 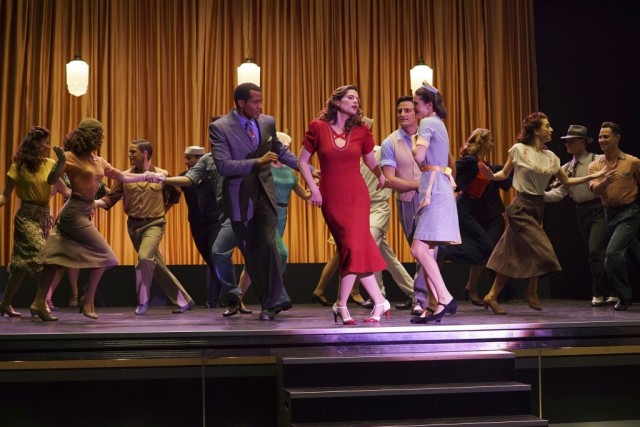 When Peggy and Jarvis awaken, their separate grief and anger comes to a head, with the two managing to escape, though also getting into a spat that seems to have them ready to split up forever, as they wander aimlessly through the desert. It’s here however that Jarvis confesses the truth to Peggy about Ana’s injuries, which will prevent them from having children. This was a fantastically emotional scene, and James D’Arcy has really been crushing it on this show lately, with his great performances as the grief-stricken Jarvis. Fortunately, Peggy and Jarvis aren’t in fact splitting from each other, as they manage to reconcile, and even manage to steal the truck from Manfredi’s men that have been sent back to kill them. Well, that’s lucky.

Back at the SSR, Thompson appears to have betrayed Sousa and Samberly, throwing them in prison, in an attempt to curry the favour of Vernon Masters. It was fantastic to see the episode honestly sell to audiences that Thompson may have turned again, even if it’s soon after revealed that this was an act, which Sousa and Samberly were in on. Thompson had perhaps his best episode in the entire history of this series here, as his true deviousness and shrewdness really came into play, with Thompson appearing to switch sides on a whim, which fantastically keeps audiences guessing as to what’s really going on with him.

Even Vernon Masters seems to eventually be roped along with the plans of Peggy’s crew, when the lot decide that they can use Howard Stark’s gamma cannon to kill Whitney Frost once and for all. Peggy is of course not happy about it, but she has no choice but to go along with Thompson’s operation, only to soon after find out that Thompson played even her and Sousa, and is actually planning to turn the gamma cannon into a bomb that will wipe out both Whitney and Wilkes! Like I said, this was an excellent episode for Thompson’s character, and audiences won’t see this second turn coming, which makes the first one even more satisfying, especially when the fuel line to Sousa’s car ends up being cut, and Thompson even goes as far as to lie to Samberly about Sousa approving of his new plan.

Whitney, meanwhile, has been taken to a secluded waste management facility by Manfredi, which allows her to experiment on Wilkes and try to extract the Zero Matter. Wilkes appears to be literally ready to explode with the stuff, to the point of begging Whitney and Manfredi to leave him in the desert, though surprisingly, Whitney is unable to extract any Zero Matter from him. Whitney’s still desperate and vicious as ever, though it was also appealing to see Thompson interact with her during this sequence, and yet again appear to be playing the rest of the crew, as he tips off Whitney to Masters’ plan of killing her with the gamma cannon, ensuring her loyalty, as well as Masters’ demise. I have to say, for the first time, Thompson is finally coming off as an actual, credible SSR agent, and not just as a credit-hogging frat boy. It finally makes sense that he would be appointed chief of the SSR in the late Dooley’s absence. 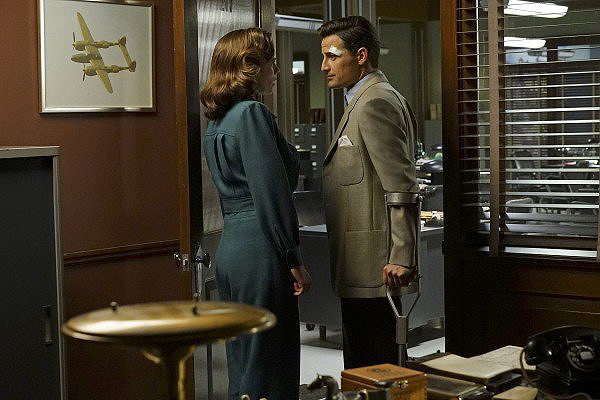 This episode yet again offers a pretty awesome climax as well, with Peggy and Sousa hijacking Samberly’s car, and forcing him to build a jammer that will disable Thompson’s gamma bomb. Peggy manages to infiltrate the waste facility, and even manages to find Wilkes, though Wilkes ends up sealing a door when she tries to bring him out, saying that it’s too late for him, and that Peggy needs to go. It wasn’t all that heartbreaking, considering that Wilkes betrayed Peggy pretty badly during the previous episode, but the real sucker punch came in the double sequence of climactic stand-offs that wound down the episode.

On the one end, Peggy and Sousa confront Thompson about his secret agenda of blowing up Whitney, Masters and Wilkes in one fell swoop, with Peggy holding a gun on Thompson, after he forces Samberly to disable the jammer, and puts his finger on the button. Within the facility meanwhile, Masters is found out as he prepares to kill Whitney with the gamma cannon, thanks to Thompson’s earlier tip, leaving Whitney to prepare to kill Masters by absorbing him like the many other men she’s killed. As Whitney prepares to do so however, Wilkes stumbles in, full to burst with Zero Matter, and lets loose with a massive Darkforce emission right as the episode concludes! Holy crap, what even happened there?! I guess we’ll find out in the season finale next week, but damn, what an amazing way to end this penultimate episode!

Agent Carter’s second season may not have had the same consistently outstanding footing that the first season had, but the past several episodes since the low point of, “The Atomic Job” a few weeks ago have all been truly excellent! “A Little Song and Dance” continued that trend very nicely, setting up for a very exciting season finale next week, while also demonstrating the true depth of Thompson’s devious plotting, as seemingly everyone ended up being played by him as the episode concluded. Whether or not Peggy is willing to shoot Thompson is a very interesting question, but no matter what she does, that unleashing of Zero Matter by Wilkes can’t possibly mean good things for anyone at the scene!

Agent Carter 2.9: "A Little Song and Dance" Review
The penultimate episode of Agent Carter's second season continued the fantastic high note shared by the past several episodes, as Thompson begins playing everyone in sight, and the true fury of Zero Matter stands poised to be unleashed in its entirety!
THE GOOD STUFF
THE NOT-SO-GOOD STUFF
2016-02-26
92%Overall Score
Reader Rating: (0 Votes)
0%