iZombie continues to ride high with, “Eternal Sunshine of the Caffeinated Mind”, another outstanding episode that managed to balance a little of everything within this show’s finest ingredients. Between an appealing case-of-the-week, a charming new brain for Liv, and a conclusion that creates tons of big developments to chew on as the show enters a hiatus until late March, this show doesn’t seem to be slowing down in terms of quality, and that’s wonderful!

The episode begins with one of the series’ more outlandish murders to date, as a highly positive coffee shop owner gets killed by an air conditioner that falls on top of her. After the Seattle PD forensics team discovers that the screws from the unit were removed, it’s determined that the woman was murdered, and this puts Liv and Babineaux on the case!

Liv’s latest brain makes her incredibly positive, speaking entirely in outrageous cliches and positive sentiment, which is pretty amusing. Sure, she’s had funnier brains to enjoy, but there was something equally heartwarming and silly about this latest one, particularly since it contrasted so well with Babineaux’s usual no-nonsense attitude. It was satisfying to see extra emphasis given to a charming and well-crafted case-of-the-week this week, especially with the inspired angle of it being very difficult to find a motive for killing this victim, since she was a highly bright and chipper person that everyone seemingly liked.

Even then, the plot thickens well, as the woman’s former partner happens to own a much more negative and straightforward coffee shop across the street, and had apparently sued the victim over a similar design in her own coffee shop, unsuccessfully, ruining his plans for a franchise effort. This comes after a troublemaking employee is initially suspected, though obviously, she’s not the killer, as that would be far too easy. Even the former partner being the killer feels a bit too simple, which is why it was a good thing that the episode didn’t ultimately go there, but nonetheless set the guy up as a convincing red herring. 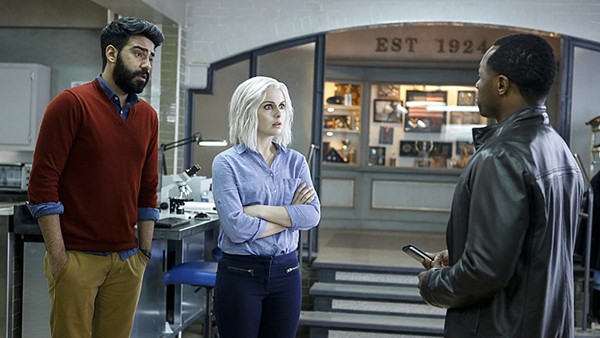 In the end, it was the victim’s daughter that did the killing, specifically putting her fake French boyfriend up to it, exploiting his real estate mother’s access code to get into the apartment above the shop, and drop the air conditioner. It makes sense in the end, since the daughter positioned her mother right where the air conditioner was going to fall, by saying that a certain delivery was outside. Even more chilling than that rather ornate and brutal matricide however is that the killer actually ends up getting away this week, which tied in well with some of the naivety that comes from Liv’s trip through unyielding positivity in every situation. She even put the boyfriend up to taking the fall, letting him go to prison for up to twenty years, while she traveled off to Paris, selling the coffee shop and getting a big inheritance, without a care in the world. It’s not often that a killer gets away on iZombie, but the show handled this loss for Liv and Babineaux very well, hopefully leaving the door open for another shot at the girl down the line.

Liv also got brought hard down to earth after an impromptu visit from Major, who is troubled by Ravi’s zombie cure experimentation predictably going badly, turning the latest test rat into a ravenous monster. Major prepares to confess to Liv about his dealings as the Chaos Killer, though he’s interrupted by the return of Gilda/Rita, who scares him off, though not before Major unwittingly, or perhaps very cleverly, calls her, “Rita” when saying good night, leading to Liv putting together that her roommate is the woman that Major was secretly seeing, and is the spy that’s been poking around her life. This leads to a superb scene of Liv clocking Gilda/Rita, and saying that she wants her out, and will burn anything of hers left after midnight. That’s on positivity brain too! Yikes!

Drake and Blaine also got standout material in this latest episode, though much of Drake’s material stemmed from just one shocking revelation; He’s an undercover cop with the Seattle PD! It’s sort of amazing that Liv has never found this out, considering that Drake has been paying regular visits to the local precinct, though I suppose that Drake has been keeping his secrets close to the vest, in fairness. This has huge new consequences for Liv formerly saving Drake’s life too, as well as for the continuing battle against Stacey Boss, as his new preferred lieutenant is an undercover police officer. Looks like Blaine is no longer the only threat that Mr. Boss has to worry about!

Speaking of Blaine, he had perhaps the best story arc of all in an already excellent episode! After making his forced payments to Mr. Boss, Mr. Boss eventually learns of Blaine’s treachery, and decides to pay him a rather fatal visit. After a superbly scary scene, where Mr. Boss reveals a fascinating past as a skilled dungeon master in Dungeons & Dragons, he tells Blaine to make his, “God Call”, referencing the ability where a player’s preferred god has a 1% chance of saving them from certain doom, before taking him into the woods. After some more smart talk, Mr. Boss’s thugs then slit Blaine’s throat and dump him in a shallow grave! Holy crap! Blaine is dead!

… Ok, no he isn’t. Looks like Blaine’s, “God Call” came through, as one of his associates comes downstairs, and sees that the consort, whom Blaine recently had sex with, is munching on brains in the basement, having been turned into a zombie! Sure enough, in a scene that’s both hilarious and vaguely terrifying, Blaine rises up from his grave as a group of amateur bird watchers obliviously fail to notice, before Blaine walks through them and steals their blanket! Yes, Blaine is a zombie again, with his cure wearing off at the best possible moment. This was brilliant storytelling, and expertly played with viewers’ emotions and expectations. You would honestly think that the show actually killed off Blaine for a minute!

After these exciting developments, it’s bittersweet to have iZombie settle into a break after this, not set to return until March 22nd. Still, much like The Flash in The CW’s previous timeslot on Tuesday this week, iZombie couldn’t have possibly kicked off its hiatus on a better note. “Eternal Sunshine of the Caffeinated Mind” was yet another of this season’s best episodes to date, with iZombie now being on a pretty superb hot streak for most of 2016 so far! With Blaine once again playing for Team Z, and Liv’s treacherous roommate being found out, the season is kicking into high gear, as the many warring crooks of Seattle will inevitably begin to start closing in on each other!

iZombie 2.14: "Eternal Sunshine of the Caffeinated Mind" Review
iZombie once again delivered an excellent episode before settling into its month-long hiatus, as Liv and Babineaux work a clever and satisfying case with seemingly no motive, while Drake's secrets are revealed, and Blaine suffers a grisly fate that fortunately doesn't stick!
THE GOOD STUFF
2016-02-26
96%Overall Score
Reader Rating: (0 Votes)
0%