For the first time, Legends of Tomorrow escapes the past and moves into the future. The title of the show’s latest episode, “Star City 2046”, really says it all, with the show having a sort of spiritual crossover with Arrow, complete with a Stephen Amell guest role as an aged Oliver Queen, as the group ends up crash-landing in this future time period, and sees first-hand some of the destruction that Vandal Savage has supposedly wrought.

… Except, in a pretty good twist, Vandal Savage had nothing to do with the disastrous potential future that the team is standing in. Instead, it was instigated by Grant Wilson, the apparent son of Slade Wilson, the villainous Deathstroke from the highlight second season of Arrow. Grant is the first to take up the mantle of Deathstroke successor, Ravager in DC Comics lore, giving him precedent to appear in this capacity, though it was cool to see him used here as a way to further the never-ending struggle between Oliver and Slade. It was also cool to have Grant commanding an entire army of Deathstroke soldiers that was apparently responsible for driving everyone out of Star City, and killing pretty much all of Team Arrow’s sympathizers, which served as both a great nod to Deathstroke’s Mirakuru army from Arrow’s second season, as well as the similarly-themed ‘Jokerz’ gang of super-villain successors in beloved DC animated series, Batman Beyond. 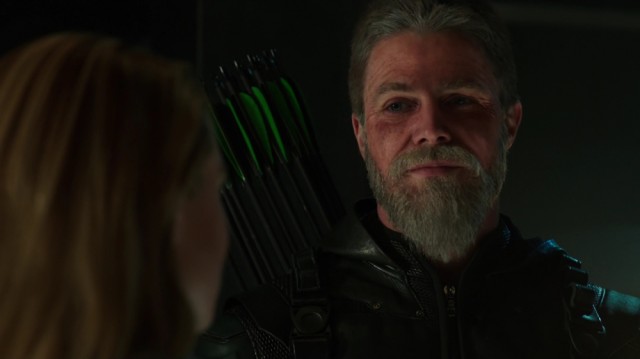 In fact, the setting is easily the best part of this episode, as it borrows lots of great elements from not only an extra-dystopian Batman Beyond for the likes of Green Arrow, but also Frank Miller’s famous Batman graphic novel, The Dark Knight Returns. The 60-year-old Oliver even has a missing left arm when he’s re-encountered by Sara while Rip’s crew seeks a prototype gizmo that will fix the damaged Waverider, which was an especially cool nod to the older Green Arrow’s appearance in The Dark Knight Returns. The long beard on the aged Oliver even nicely resembled Green Arrow’s classic, pre-New 52 look from vintage DC Comics lore, and likewise, several of the criminals that were running wild and free in the future Star City blatantly resembled members of the Mutants, the vicious criminal gang menacing a future Gotham City in The Dark Knight Returns.

Clearly, there was a lot of love put into realizing the presentation of the episode, and as usual, the style behind Legends of Tomorrow doesn’t disappoint in its latest offering. The character dynamics this week however were a little more mixed. The mysterious Green Arrow-like attacker that encountered the team at the end of last week’s episode being revealed as Connor Hawke was inevitable, but the further reveal that this version of him is actually Diggle’s son, not Oliver’s like in DC Comics lore, was a really neat twist. It was also neat to have John Diggle Jr. use, “Connor Hawke” as a pseudonym because he isn’t worthy of the Diggle name, after failing to prevent his father’s murder, which likely also explains why he is the one hero fighting for justice in a destroyed Star City. There’s hints of a very deep and interesting history between Oliver and Connor Hawke, though since we only have a single one-hour episode to tell this story, it’s inevitable that most of it isn’t touched on.

There were some other great dynamics in the battle against Grant and his new Deathstroke army as well, namely via Mick, who becomes attached to the criminal-dominated Star City and wants to stay, as well as Sara, who defies Rip’s orders to stay put and avoid interfering with the future, due to her emotional attachment to her destroyed home, which probably won’t even stick when the team returns to 2016. The idea of Sara and Ray never returning meaning dire consequences for Star City in the future is a pretty interesting one, especially if Arrow actually decides to tease this story development a few years down the line. On the flip side, it was equally interesting to have Mick find that he might be happiest in a different timeline altogether, putting Leonard in the interesting position of having to be the level-headed one that ends up saving the day, as well as saving Mick from his own selfishness. These pokes at a potential ‘good side’ in Leonard continue to be fantastic, and continue to tease that Captain Cold may have all but reformed by the time he returns to Central City in 2016, even if Mick is a bigger question mark.

Less successful however is the new romantic subplot between Kendra, Ray and Jefferson. Jefferson apparently has a crush on Kendra, which Martin tries to help by asking Ray how he feels about her. This begins a chain of events that has Ray realizing that he likes Kendra too, and unsuccessfully trying to get quality time with her. Kendra apparently doesn’t want to date, since she’s still taking in the whole being a reincarnated Egyptian hawk goddess deal, which leaves Jefferson out of the running too. Frankly, this entire subplot just felt like filler. Ray and Jefferson just completely make peace with the situation after confronting each other about their shared feelings for Kendra, rather unrealistically, and I wouldn’t be surprised if this situation was never brought up again.

Like I said though, the episode was still very cool and stylish, and the large-scale final battle between all of the Legends and Grant’s Deathstroke army, with Connor Hawke and the older Oliver joining in the fray, was pretty neat to watch as well. Rip’s crew ends up exiting 2046 by the end of the episode, heading to a different time period, though this glimpse into the future, which will no doubt be more rare than trips to the past, presented a whole new interesting side of Legends of Tomorrow, which the show could get a lot of great mileage out of, if it places these future-driven episodes carefully, especially when they tie into other events within the future of The CW’s DC Television Universe.

“Star City 2046” made for a cool tie-in to the future of Star City, post-Arrow, and was mostly a strong episode that presented a neat new side of time travel in the DC Television Universe. Ray and Sara’s absence having big consequences for Star City is another way that Legends of Tomorrow is effectively upping the stakes for itself, and even without any trace of Vandal Savage in this latest episode, the show didn’t suffer from placing itself into an entirely Savage-free scenario. Romantic subplots really don’t feel like the show’s strong suit at this point, and Martin is probably right when he directly points out that the Legends should entirely stay away from them, but regardless, the filler material fortunately didn’t compromise the much better showcase of what was going on around the team, as they take their chilling tour through Star City’s cold, desolate future.

Legends of Tomorrow 1.6: "Star City 2046" Review
Legends of Tomorrow offered a neat spiritual tie-in with Arrow this week, as it explored a destroyed, criminal-dominated Star City from the future, mostly offering a stylish presentation with some mixed character work.
THE GOOD STUFF
THE NOT-SO-GOOD STUFF
2016-02-26
82%Overall Score
Reader Rating: (0 Votes)
0%