Even with a shortened episode order, Superstore managed to end its first season with aplomb in “Labor”, an amusing and heartfelt finale for Season One. The episode is all the better with the knowledge that NBC has already renewed Superstore for Season Two as well, so even with the episode’s comically unfortunate ending for most of the Cloud 9 crew, we know that we’ll still have plenty to look forward to when the series returns later in the year.

The episode’s title happens to be a bit of a double-entendre, as it not only relates to Jonah beginning to question Cloud 9’s treatment of their employees, but also features Cheyenne finally having her baby! Bo isn’t present during this episode unfortunately, which feels like the only slight ding against it, but the way that Cheyenne going into labour nicely tied in with the picking apart of Cloud 9’s increasingly apparent poor employee treatment was done really well. 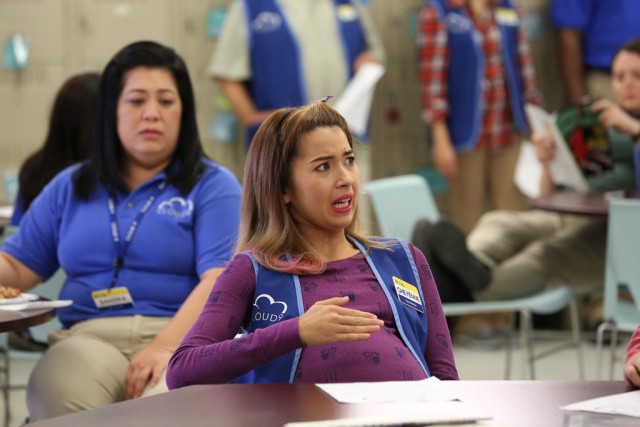 After a funny false alarm at the start of the episode, Jonah has the employees wondering about paid maternity leave for Cheyenne, which Cloud 9 naturally doesn’t offer. Jonah even manages to rope Amy into calling corporate to ask for more information, which hilariously has them bounced between numerous representatives when they inadvertently utter words like, “Union” and, “Strike” out of context, leading to Cloud 9 sending a, “Corporate relations consultant” (read: union buster) to the store, in order to give a condescending presentation about how much Cloud 9 supposedly, “Cares” about its employees. Of course, the characters and viewers both know that this is a load of crap.

It was delightfully discomforting to see how much Cloud 9 truly has maggots in their smile with this presentation, which makes a lot of the workplace antics around the store feel even funnier, knowing that the employees are working for a corporation that is this comically greedy and careless. Seeing how the overly enthusiastic union buster talks down to the employees, only to have trouble getting a rapport going with Glenn, and also hilariously getting chewed out by a dejected Dina in one of the episode’s funniest moments, as she struggles with her loss of power, was very funny stuff. It’s also as unhelpful as you would imagine. 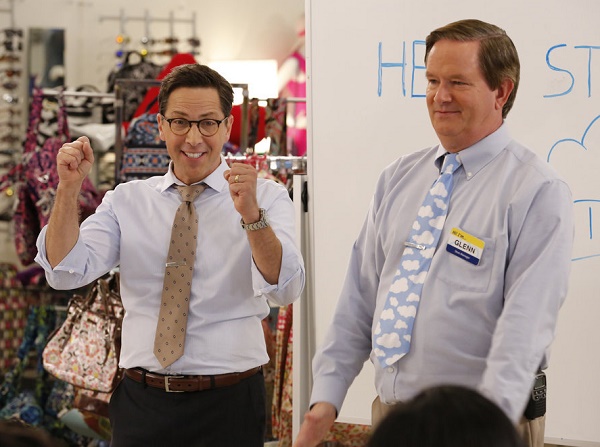 Once again, Jonah and Amy end up pulled into an argument over this, as Jonah continues to push for policy reform that probably isn’t realistic, while Amy argues that the employees don’t have the power to ultimately change Cloud 9’s outlook on them. Cheyenne ends up going into labour for real during the argument though, which initially happens right outside the door as Jonah and Amy argue over how much they care about the workers in the store, which worked to very funny effect. Fortunately, they eventually notice the birth, and rush out to help, with a commercial break helpfully placed to avoid the gory details of Cheyenne bringing her new daughter into the world, which she apparently names, “Harmonica.” Again, not having Bo here felt like a missed opportunity for a joke regarding likely silly baby names and such, but whatever.

What follows is a climax that serves as a surprisingly heartwarming way to cap off the show’s first season. Glenn creatively pretends to tell Cheyenne off for leaving a mess, distracting everyone and bringing her child into work, resulting in a, “Punishment” of six weeks’ paid suspension, which, in reality, is unofficial maternity leave. This was an awesome moment for Glenn, and really showed how much he’s a breath of fresh air within the corporate reaches of Cloud 9. This also nicely played into the following scene, where the union buster heard Glenn give Cheyenne unofficial leave as she’s taken away by paramedics, leading to Glenn getting fired, and forcibly appointing Amy to be the new store manager when she finds out. 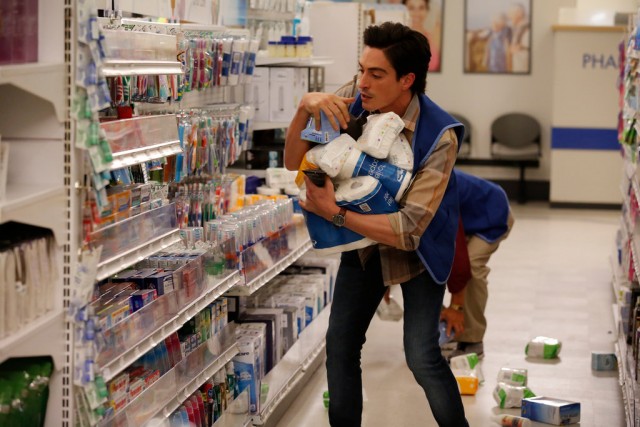 Amy’s first act as store manager is to finally go along with Jonah’s suggestion for an employee walkout, and everyone starts telling the other employees to drop what they’re doing and walk out of the store, joining Glenn in solidarity, in a moment that is truly joyful and powerful, and really shows how well this ensemble now works, with the winding down of Season One. There’s even some good laughs thrown in too, such as Myrtle getting lost and having to be directed back during the walkout, or Garrett not even waiting for an explanation from Jonah as to why everyone is leaving, and just doing it because he’s bored and hates working.

The triumphant walkout offered a great, comically sobering reality soon afterward too, as Dina takes a megaphone and stands on the back of her truck, announcing that Cloud 9 will be fine without everyone, that they’re all fired, and that they will get their last paycheques in the mail, with Dina taking over as the new store manager. It was a shocking and funny conclusion that would have still worked if Superstore didn’t end up being renewed, though now that we know it’s definitely going to be back for Season Two towards the end of the year, it will be very interesting and fun to see how everyone comes together in the store again. 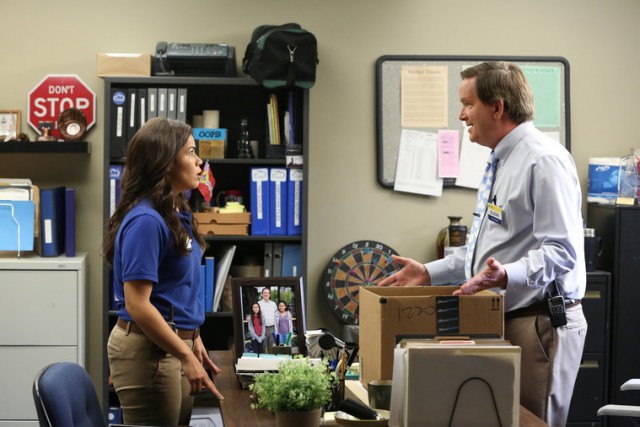 “Labor” was a very funny and heartfelt way to conclude the first season of Superstore, and proves better than even the other highlight episodes of Season One that the Cloud 9 employee ensemble has worked out their kinks, and now stands as one of the finest comedic forces on television at present. Seeing everyone come together and stand behind Glenn, even when corporate could destroy their jobs (and did end up destroying their jobs!), was very uplifting, and even if the walkout didn’t go as planned, viewers can rest easy, knowing that Cloud 9’s retail grinds for these people are not yet finished. Making Dina the new boss will hopefully lead to even more outstanding comedic possibilities next season as well!

Superstore 1.11: "Labor" Review
Superstore concluded its first season on a superb note this week, as the employees come together in solidarity behind both Cheyenne and Glenn, after we get a hilarious tour through the true depths of Cloud 9's shameless employee contempt.
THE GOOD STUFF
THE NOT-SO-GOOD STUFF
2016-02-26
88%Overall Score
Reader Rating: (1 Vote)
99%