NOTE: Full spoilers for this episode of “Agent Carter”, including a major character death, are present in this review

Agent Carter’s unlikely second season saw itself to a reasonably good conclusion in the season finale this week, though one that didn’t quite achieve the high notes that several episodes from earlier this season did, let alone those from Season One. The lingering plot threads from the Zero Matter case were brought to a close in a satisfying, if perfunctory way, while leaving the door open for a possible, if especially unlikely Season Three next year. We can only hope.

After the tense stand-off that capped off the penultimate episode during last week’s twofer, Peggy and co. end up being knocked senseless by a shock wave from Wilkes’ sudden expulsion of Zero Matter. Vernon Masters seems to have entirely disappeared, though Wilkes is alive, and newly Zero Matter free! Unfortunately, Whitney Frost is also alive, forcing Peggy’s crew to beat a heated retreat, as Whitney has now absorbed more damaging Zero Matter than ever before! 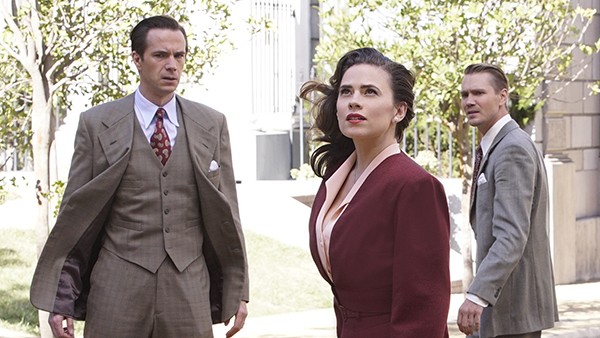 Desperate to separate the Zero Matter from Whitney and close it from the human world for good, Peggy and friends try to come up with a plan, and this fortunately opens the door for a return by Howard Stark, who has finally decided to show up again, after a lengthy stint in Peru! After determining that Wilkes has a clean bill of health, he, Wilkes and Samberly try to devise a way to solve the Zero Matter problem… Before Joseph Manfredi shows up to complicate things further!… Until it’s revealed that he’s actually an old buddy of Howard’s, and is just as eager to stop Whitney as everyone else!

Yes, Manfredi turned out to be a very unlikely ally in this season finale, but the episode did a good job of justifying this character turn. Manfredi is clearly very much in love with Whitney, but after Whitney absorbed a whole new batch of Zero Matter, she’s become even more distant, and will simply write formulas on the walls all day long, desperate to formulate a solution to re-open the rift and unleash Zero Matter upon the world. This leaves Manfredi with no option but to turn to Peggy’s party, which ultimately leads to the idea of Manfredi distracting Whitney long enough for Peggy and Sousa to sneak in and grab her formulas off the walls. Unfortunately, this comes at the expense of a poor goon, who actually did turn out to be working for the feds in trying to bring down Manfredi during his mock torture session! That was a funny turn, even if it ended badly for the poor henchman.

Still, using Whitney’s scrawlings, Howard, Wilkes and Samberly manage to construct a device to re-open the Zero Matter rift on Howard’s studio lot, which also draws Whitney to the scene, after Howard unsuccessfully tries to knock some golf balls into the rift, of course. Fortunately, thanks to some scientific knowhow, the group easily separates the Zero Matter from Whitney, and incapacitates her… Almost too easily in fact. Considering how great a villain that Whitney has been, she went down really easily here, and that’s a huge disappointment. Surely, she could have unleashed some Darkforce-powered havoc before ultimately being subdued? At least Dottie Underwood put up a good fight last season.

The real excitement comes when one of Howard’s gizmos shorts out at the wrong moment, forcing Sousa to try and switch it off manually, while the rest of the crew argues over who should risk getting sucked into the rift. This results in a solid scene of everyone banding together to keep Sousa in the world of the living, before Jarvis and Samberly finally come up with the idea of flying Howard’s second working hovercar into the rift, carrying the explosive-rigged Gamma Cannon. This was a neat nod to both Captain America: The First Avenger and Agents of S.H.I.E.L.D., and it did indeed end up saving the day, as the resulting gamma explosion shuts the rift, and all is well!

The denouement of this season finale honestly felt better than the somewhat anti-climactic climax, as Wilkes takes a new job with Howard, and has a nice ‘what if?’ moment with Peggy, before the two amicably part ways. Peggy then prepares to fly back to New York with Thompson, just in time for Ana Jarvis to return home from the hospital, and Jarvis to lament Peggy leaving L.A. Jarvis does bring up a compelling reason to stay however, and this leads to Peggy finally saying her goodbyes to Sousa, who reprimands her for her recklessness!… Before the two finally share a long overdue kiss, which closes out the episode. Too bad for Violet, whose presence this season was almost entirely pointless, but hey, this seems to confirm what many of us suspected all along; Daniel Sousa is the mysterious husband that Peggy alluded to during Captain America: The Winter Soldier, barring some other left-field twist, I suppose… Though this does beg the question of where Sharon Carter/Agent 13 comes from in Captain America: The Winter Soldier, if Peggy’s brother is dead. Maybe she’s actually from Sousa’s family tree?

Regardless, we do get a harrowing final post-credits scene for Season Two, as Thompson learns of Peggy staying in L.A. for a bit longer, for Sousa-related reasons, and answers the door while carrying the mysterious dossier that Masters forged for Peggy. Upon opening the door however, Thompson is shot, and a mysterious man takes the dossier away, suggesting that it may not be quite as false as Masters led us to believe! More importantly though, Thompson is clearly shown shot in the heart and in a pool of blood, which seems to confirm that he’s met his end here. There aren’t any Lazarus Pits in the Marvel Universe, after all, and should there be a third season of Agent Carter, Thompson’s death will likely prove to be a strong reason for Peggy to keep hanging out in L.A.

Even if the resolution in this season finale was better than the climax itself, Agent Carter still closed out its second season on a good note in this episode, and I do hope that it returns for Season Three next year, against the odds. It was even great to see Whitney Frost ultimately survive, since she truly is a great antagonist, and her incarceration in a mental institution, with Manfredi coming for a visit, was as good a place as any to leave these two. Even if Agent Carter doesn’t end up airing a third season on ABC proper, the character of Peggy Carter is too beloved to simply abandon, especially with the Marvel Cinematic Universe being here to stay, and I imagine that sooner or later, we’ll learn who killed Thompson, and why they cared so much about this mysterious dossier. That’s before one considers that Dottie Underwood is still in the wind too. Regardless of the final fate of Agent Carter, I don’t feel that Peggy’s adventures will truly be at an end here. I’m pulling for this event series to return though. It clearly has more great stories to tell!