Brooklyn Nine-Nine had another of its kookier, off-the-wall episodes this week in, “Cheddar.” It was also another episode that seemed to have a main plot that encompassed all of the subplots, namely in Holt attempting to visit Paris to spend some quality time with his husband. Initially, there is a disconnected subplot with Diaz and Pimento, with Jason Mantzoukas yet again bringing back his comically traumatized detective from last week’s episode, but even this ends up folded into the main plot around the episode’s halfway point.

The Diaz/Pimento plot is arguably the highlight in what was a very funny episode this week too. The two share hilariously exaggerated sexual tension throughout the precinct, which Jeffords constantly seems to be running into, making him both mystified and uncomfortable. The exchanges between Diaz and Pimento are absolutely priceless in terms of laughs, and Stephanie Beatriz and Jason Mantzoukas already look to be a superb pair that make perfect sense as an on-screen couple! 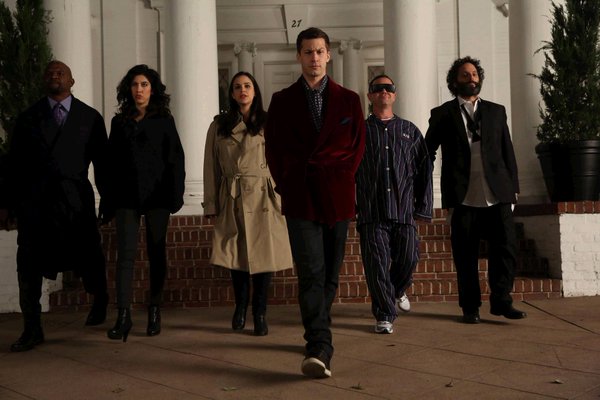 Things take a surprising turn however when Pimento freaks out after Diaz finally asks him out, sprinting away and awkwardly meeting Jeffords in the shower of Holt’s house (it makes more sense later). From there, he confesses to Jeffords that his time undercover has left him emotionally stunted, and unable to accept happiness. After Pimento tells another horrifying story about his undercover years, Jeffords says that Pimento does deserve to be happy, and, that’s the end of it! Pimento immediately goes off to profess his love to Diaz, before Jeffords even finishes the point he was trying to make! It might come off as too easy to some, though at least the resulting exchange between Pimento and Diaz is also very funny, as Pimento asks Diaz to marry him, before Diaz says they should start with a drink, only to push him against the nearby vehicle and start making out with him in front of Jeffords. It seems fitting, really.

Most of the episode however revolves around Peralta volunteering himself, Santiago, and a blinded Boyle (who had some sort of unspecified eye surgery) to babysit Holt’s corgi, Cheddar, while Holt is away in Paris. Santiago freaks out about the situation until she learns that it comes with a big binder of instructions, but even then, it’s not long before Cheddar predictably acts out, and eventually escapes the house, forcing the entire precinct to go looking for him.

Out of the somewhat scattershot Cheddar jokes, they hit more often than they missed, though it sometimes felt like a few jokes were overplayed. Some of the intercut shots of Cheddar roaming around as Peralta talked about finding him were kind of funny, though Santiago’s seemingly sexual attraction towards Holt’s instructions felt odd, even for the standards of this show. Likewise, Boyle being blinded by surgery, to the point where he doesn’t even know the difference between a corgi and a possum (you’ll see), feels like another stretch, and while it results in some laughs, it feels like the whole Boyle blindness angle was only put into place because the writers couldn’t figure out a place for Boyle in this week’s episode, so they just crowbarred one in. Sure, it still merits a few laughs, though it pretty much reduces Boyle to a slapstick buffoon this week, which some fans of his character may not like.

Most successful was a small subplot that was created for Gina, who is told to stall Holt for as long as possible while the detectives all look for the corgi. A bunch of trained detectives looking for a lost dog feels like a logical setup for a police-themed sitcom, and fortunately, the joke didn’t end there, as Gina continued to steal the show with her increasingly outlandish stalling attempts, even admitting to Peralta up front that she will probably total his car. Gina does as much damage to Peralta’s car as possible, which is all hilarious stuff, even resorting to trying to pick an air freshener with Holt before he finally just orders Gina to take him home, suggesting that he’s going through more real issues than Peralta predictably destroying his house.

Considering all of the silly antics that occurred beforehand, it was kind of a shock to have Holt eventually seem legitimately emotionally shattered at the loss of his dog (well, for Holt’s standards), and when Peralta and Santiago eventually put together where the dog is, the truth comes out. Apparently, Holt and Kevin have been having marriage troubles recently, and Cheddar is also acting out as a result, on top of missing Kevin, who is the one who walks him and spends the most time with him. It was a surprisingly glum way to end the episode, especially due to the heightened goofiness of the humour this week, though fortunately, a final annoyance from Boyle managed to break the tension before things got too serious. 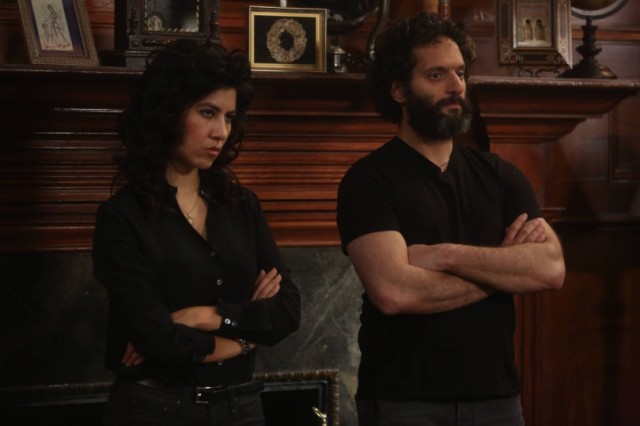 The storytelling was largely simple this week, and it occasionally tried too hard and strained a few of the jokes, but all in all, “Cheddar” was a funnier offering than the past couple of Brooklyn Nine-Nine episodes, even with the somewhat emotional conclusion for Holt. Still, it’s fun to just let loose and have fun with the precinct every so often, even considering that this is a frequently silly sitcom. Even so, taking the leash off of the Nine-Nine’s officers isn’t so bad, as long as it’s done judiciously. “Cheddar” may not have been all that grounded in reality, but at least it offered a refined blend of good laughs and great heart.