Lucifer ditched its procedural format pretty much completely this week, and in the process, delivered its strongest episode yet! “Wingman” was a real winner for FOX’s shaky, but fun freshman Vertigo/DC Comics series, showing a much more personal side of Lucifer, and even giving Chloe her best storyline yet, as she’s finally given a lead to chase beyond simply solving a series of murders that Lucifer just happens to tag along with.

Naturally, this episode builds on the big twist from last week’s episode, that being that Lucifer’s severed wings have now ended up in the hands of some bad human. Forced to ask Chloe for help, Lucifer begins poking around town in pursuit of his wings, eventually learning that they’re being sold at an auction by a man who profits from selling fake holy artifacts to the faithful and gullible.

This is already a pretty good setup for an episode of Lucifer, and one that is far better than another mundane case-of-the-week offering. It gets better however, when Lucifer is forced to call upon the aid of Amenadiel, who cautions Lucifer that his wings ending up in human hands will ultimately lead to disaster for humanity. Lucifer and Amenadiel have a great dynamic with each other, and that dynamic reached awesome new heights in this episode. It’s too bad that we couldn’t check in with Linda this week in fact, who is no doubt being passed around happily between both divine figures, though fortunately, the rapport between Lucifer and Amenadiel continued to be a highlight in the episode.

Even Dan got a better turn than usual this week, as Chloe begins to probe the case of the dying corrupt cop that she believes was on the take, to the point of alienating herself from the rest of the LAPD. Dan being the voice of reason to Chloe’s inability to shake a bad feeling was pretty appealing, especially as Dan forces Chloe to confront the darker, more emotional stakes of the case, which is something that Lucifer would never care about. This is how the show should be utilizing Dan; Providing a human angle for Chloe’s police insight where Lucifer’s devil-may-care (pun not intended) disposition wouldn’t serve the story arc. This finally had Dan doing something other than griping about Lucifer, which Chloe is already doing plenty of, leaving Dan’s character as a bit superfluous for the series so far. Finally, he should hopefully start finding his niche on the show with this direction.

Regardless, the group eventually meets up at the actual auction, where Lucifer plans to bid money on his wings to try and get them back. Chloe however warns that the FBI is minutes away from raiding the place, and unfortunately, Lucifer and Amenadiel take too long to get the wings. Thankfully though, Amenadiel has the ability to slow down time, allowing Lucifer to get to the wings… And realize that they’re fake.

This was a great twist, which led into an extra satisfying episode climax for Lucifer, as he learns that the atheist auctioneer was actually converted into being a believer, upon the mere sight of Lucifer’s wings. This really speaks to the power of divine objects and appendages in the human world, and further builds the show’s strong Heaven/Hell dynamic. Not only that, but things got even better when Lucifer learns that it was Amenadiel that tipped the auctioneer off to the existence of the wings in the first place, knowing full well that he would probably die in the process, proving that Amenadiel doesn’t seem to care about human life any more than Lucifer does, if it means restoring order to the divine aspect of the world. This was great storytelling, as was the resulting fisticuffs between Lucifer and Amenadiel. It was only ruined slightly by the ease with which Lucifer torches his wings by throwing a lit cigarette on them, causing them to instantly go up in flames. Seriously? Surely, angel wings would be made of far sterner stuff than that, as the ease with which they can be destroyed by fire would be a pretty huge oversight for a divine being’s biology!

As for Chloe, she goes to the crooked cop’s workplace funeral, after discovering evidence that proved her suspicions, indirectly inspired by finding a secret door during the chaos of the FBI raid on the auction. When Chloe finds the same style of secret passage at the crime scene, proving the presence of another cop in the area, she tells the other cops that the dead cop is a hero, though she and Dan only did so because they don’t want the rest of the precinct to know that they’re actively searching for corrupt cops now. This will hopefully give both Chloe and Dan far more interesting story material than the previous episodes of Season One so far, since both of them have stood pretty firmly in the shadow of Lucifer, and the rest of the show’s divinity-related story elements. 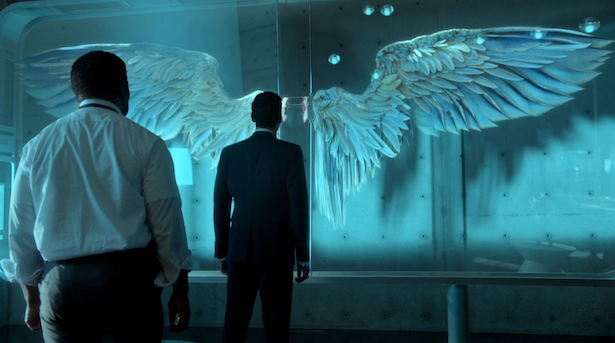 That really goes to show how much Lucifer works best as a supernatural dramedy, and not as a police procedural with a slight fantastical element. The style in which Lucifer balances his mortal desires with his immortal heritage, and forges his own path independent of the one that was laid out for him, is when Lucifer starts living up to its potential, and setting itself apart from the glut of other television procedurals, and comic book-adapted shows, the latter of which is a very competitive market right now, especially when the comic book shows currently on the airwaves are all at least pretty good, if not excellent like standouts such as The Flash, iZombie, Agent Carter, and, if we’re counting Netflix, Daredevil and Jessica Jones. Lucifer still feels like it’s finding its footing, and it’s once again getting warmer this week, though fortunately, even the weaker episodes at least have plenty of entertainment value. Thus, you can only imagine how much more entertainment value is offered in a particularly great episode like, “Wingman.”