After the disappointing misfire of the series’ 200th episode a couple of weeks ago, The Big Bang Theory fortunately provided a better offering in, “The Application Deterioration” this week. This episode puts the Wolowitz baby bomb on the back burner, and instead focuses on the guys’ arc of trying to patent their new scientific idea, which offers decent laughs, but nothing special.

Apparently, due to some frustrating technicalities at CalTech however, they run into trouble finding a shared patent deal to their liking, and ultimately can’t patent the project through the university. A lot of this is due to Howard technically being on loan from NASA, forcing the guys to return to the drawing board and figure out something else. Eventually, they all decide to simply patent the project independently, giving Sheldon a chance to embrace one of his many eccentric passions; Drawing up legal contracts! 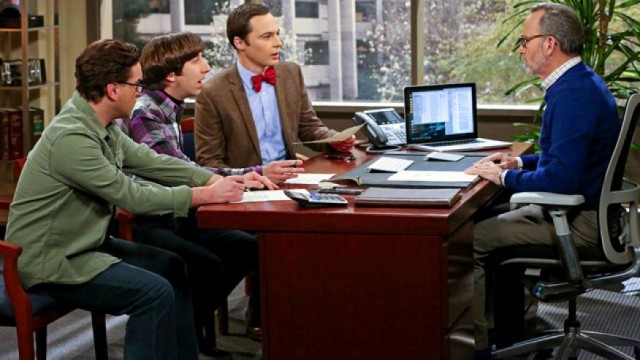 The spring-boarding of this story idea from Sheldon’s frequent love of inking contracts over many mundane things was pretty amusing in this latest episode, and led to lots of reliable Sheldon humour, and largely better humour than the 200th episode, in fact! The humour was in fact so effective that it helped to distract from the fact that the women were almost entirely in the background this week, simply serving as talking heads for the agendas of the men, albeit still with some decent gags of their own.

Another great idea that spawned from this episode is Sheldon having to confront his poor treatment of Howard, especially in regards to belittling him for being an engineer. When Sheldon agrees to put into the contract that he can’t insult Howard or his vocation, it’s a genuinely sweet moment, even if Sheldon doesn’t agree to support it until he actively signs the dotted line. This helps to allay some of the early concerns of Bernadette, who encourages Howard to think twice before signing a binding contract with Sheldon Cooper, particularly given that Howard’s previous attempts to enter some sort of professional arrangement with Sheldon have not really ended well.

There’s a brief sort of snafu of the guys humourously negotiating their contract together, which is alright, though hardly exemplary in terms of laughs or wit. It feels like the show is currently handling the whole contract angle with kid gloves, and seems to be afraid to truly start any rows between the guys over what’s in their contract. It might have actually been more interesting if the guys had signed with the university, even if it came at Howard’s expense, and the expense of most of their potential revenue. Still, what we got wasn’t bad, and it may even end up having more legs than if they’d signed with CalTech in the end. 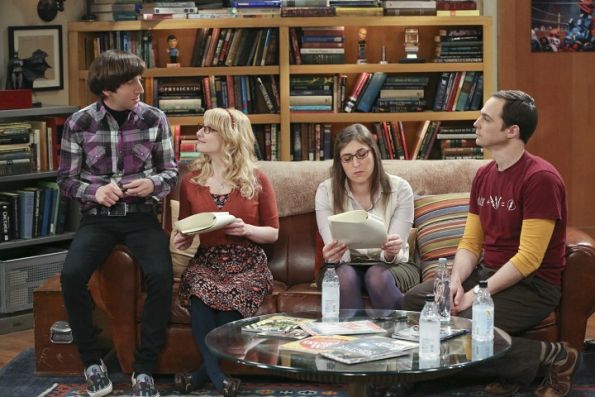 The rest of the episode hosts a subplot for Raj, which starts out well enough, though seems to rapidly lose steam and become annoying to the point of eye-rolling by the later reaches of the episode. Raj gets a call from Emily, who drops an expensive gift at his door, as a peace offering, since she wants to be friends. Raj consults with Penny, Bernadette and Amy as to what he should do, who often give him mixed and unhelpful responses. This alone would have been a great subplot, especially as Raj genuinely does try to do the right thing, and call Emily’s bluff, saying that they can’t get back together.

Where the subplot starts becoming tedious is when it starts tipping its hand to where the rest of Season Nine is probably going to go for Raj; A love triangle between him, Emily and Claire. Yes, Claire calls Raj at the same time that he’s fighting the urge to revisit Emily, saying that things conveniently didn’t work out with her boyfriend, and she’d like to know if Raj is still interested in dating her. This sounds like a fair enough idea on paper, though the episode quickly strains the joke of Raj being torn between the two women, unrealistically having him affirm and cancel plans with both, which neither Emily nor Claire ever seem to lose patience over, rather unrealistically. The final insult comes when Raj closes out the episode by sleeping with Emily, and seemingly getting back together with her. This means that not only was Raj’s subplot more annoying than truly funny, but it was also pointless, since his big struggle just ended up undoing any growth he’d formerly achieved through breaking up with Emily. That’s not good.

It’s not a good time for The Big Bang Theory’s airing schedule to start becoming unpredictable, since the show seems to be in a bit of a slump lately. Most of Season Nine has unfolded pretty well, but for whatever reason, the past few episodes have ranged from middling to lacklustre, most notably the 200th episode a couple of weeks ago. “The Application Deterioration” is at least an acceptable offering, and has enough decent humour to get by, though it also mostly felt like a filler episode, which is inexplicable, given that Season Nine only has a handful of episodes left to air, and the series has tried to push for so many big shake-ups in recent weeks.

The Big Bang Theory 9.18: "The Application Deterioration" Review
The Big Bang Theory offered decent laughs with the guys inking a patent contract this week, though an annoying Raj subplot dragged everything down this week.
THE GOOD STUFF
THE NOT-SO-GOOD STUFF
2016-03-11
73%Overall Score
Reader Rating: (1 Vote)
72%