Dammit, Lucifer, you did it again! After the show finally started gaining serious momentum last week, with the standout, “Wingman”, this week’s episode unfortunately stalled the show yet again, due to yet again falling too heavily on the procedural element of the series that should barely be present. “Et Tu, Doctor?” unfortunately went back to restoring all of the series’ struggles throughout Season One, giving us another tedious case-of-the-week, and not much development of note for the title character, at least before the ending portions.

So, who is our murder victim this week? Apparently, it’s a guy who was known in the L.A. area as the, “Cheater therapist”, a controversial marital psychiatrist who would encourage spouses to cheat on one another in order to save a failing marriage. Lucifer is of course all for the idea, but Chloe finds it more distasteful. None of that really matters though, since it just leads to the well-worn dynamic between these two, namely by Lucifer being the actual entertaining one, and Chloe being the dull, grounded presence that keeps him in check, or at least tries to.

What matters a bit more in this episode is that Linda was finally given more to do beyond be a therapist for Lucifer. She was actually brought along on this week’s case as an active presence, despite Chloe’s objections, with Lucifer managing this by helpfully sleeping with a judge that would sign a court order. I really can’t stress enough how frustrating it is to have a dull series concept be centered on a character as fantastic as Lucifer, especially given how good the Vertigo/DC graphic novels that inspired this show were. At least Lucifer is so awesome that he manages to hold this show up by himself at times.

It was also kind of interesting to see Linda properly hang around with Chloe, and not constantly take Lucifer’s side all the time. This week’s episode has Lucifer yet again struggling to understand another human emotion, in this case jealousy, and boy, did this conflict ring hollow. Isn’t envy supposed to be one of the seven deadly sins? Not only that, isn’t it directly based on desire, the thing that Lucifer deals in most? So, how the hell does Lucifer not recognize or know anything about the sentiment of envy on this show?! This just didn’t add up in the end, even if Lucifer still managed to provide his usual batch of solid laughs for the audience throughout this episode.

In the end, it’s doubtful that most viewers will care about the case-of-the-week though, despite the initially interesting hook of the infidelity-promoting therapist being murdered. The case hooks aren’t often the problem on this show, it’s the fact that the actual solving of the case is often so boring, at least beyond Lucifer’s quips and mischief. After some doing, Lucifer and Chloe find the actual killer of the therapist, another psychologist who was in love with the guy’s wife, and then he’s arrested (Lucifer doesn’t even punish him, for some reason), and who even cares? It seems like even the episode barely cares, since it lets us learn the culprit’s identity surprisingly early, in order to place better developments over an extended episode denouement.

Fortunately, these developments helped salvage a pretty iffy episode of Lucifer. It was satisfying to see Linda finally take charge and refuse to have sex with Lucifer, trying to keep their relationship professional, and possibly indicating that Lucifer’s charms have a point of wearing off after a certain amount of time. Maybe Linda won’t stick with this, but it’s a good development for her character nonetheless.

Similarly effective was the reveal that Dan is the one who shot the corrupt cop that Chloe was investigating. This is the most interesting that Dan’s character has been yet on this series, and it also comes just in time for he and Chloe to repair their fractured relationship, or at least get on the path to doing so. Frankly though, it’s difficult to care much about the idea of these two getting back together. Both of them are among this show’s least compelling personalities, and that kind of makes their relationship feel equally uninteresting, even if the promise of Dan’s dark secret could at least do good things with this story turn later.

Even Lucifer finding out about Maze’s betrayal and collaboration with Amenadiel was pretty satisfying, despite Amenadiel once again sitting out this latest episode. Linda inadvertently tips Lucifer off to the presence of Amenadiel in a neighbouring office, going by the ironic biblical name of, “Dr. Canaan”, and this leads to Lucifer angrily confronting Maze, and saying that their partnership is done. This provides the conclusion of the episode, and it was a good way to end things, especially since the show hasn’t really portrayed Maze as being anything of note without being at Lucifer’s side. If the show keeps putting aside its lesser procedural side, and focuses on storylines like this, it will be better for it. 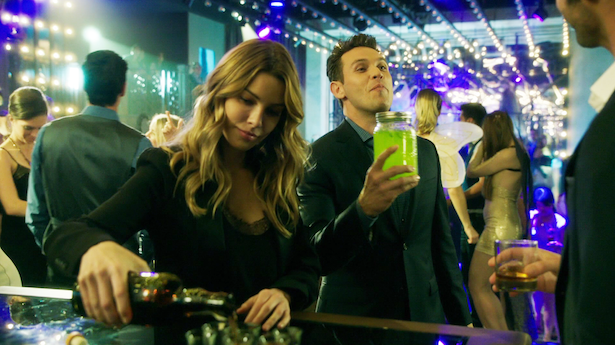 Ultimately though, despite its bright spots towards the end, “Et Tu, Doctor?” is another disappointing episode of Lucifer. This series deserves far better than episodes like this! “Wingman” really illustrated the show’s untapped potential in a great way last week, which is why it stings all the more to get another dull filler offering to follow it this week. Season One has four episodes left to really wrap this show’s first (and hopefully not only) twelve episodes, and I would think that by now that FOX would know what the viewers are ultimately watching for.