Wow, this was certainly a pretty packed episode of iZombie this week! “Pour Some Sugar, Zombie” presented yet another superb episode for the series, somehow avoiding the feeling of being over-stuffed, despite the many developments that unfolded, as the show begins to approach its season finale in a couple of weeks.

Given some of the heavy drama that takes place towards the end however, we get plenty of fun in the lead-in to our big shocks, as a stripper ends up being murdered on the side of the road, right before she’s about to rat out a major drug supplier for Stacey Boss, and this has Peyton strong-arming Liv to consume the stripper’s brain for vital information, even with the case appearing to be open-and-shut. Liv can’t just avoid Peyton either, since Peyton has now moved in with her again, replacing Rita/Gilda, who skulks around looking for brains in Liv’s apartment at the start of the episode, before she’s drugged and taken away by a mysterious man, with Liv not noticing. This confirms speculation that Liv’s former roommate did indeed become a zombie after the incident at Max Rager, though it looks like she won’t get to menace Liv and co. right away. 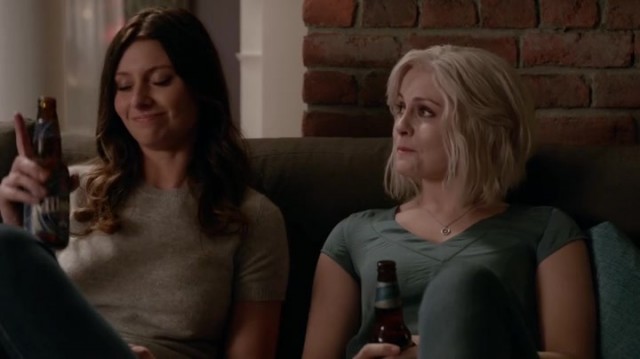 Instead, Liv is left to try her best to trigger a vision regarding the stripper’s potential testimony, which means an amusing excuse to go with Peyton to a strip club, and take the brain to its natural habitat. This results in some effectively awkward jokes, not least of which is Liv attempting to give Peyton a very uncomfortable PG-13 lap dance, making Liv’s latest brain another winner for the season. Some of the stripper jokes do veer a little too close into stereotype territory, a sin that iZombie commits with its brain humour every so often, but for the most part, almost all of the brain humour was very funny this week, and there was also noticeable effort made to give distinct personalities to the other strippers that worked with the victim, lending themselves to more solid jokes. Even perpetually unfortunate weatherman, Johnny Frost makes a very funny comeback, once again as a red herring in Liv’s latest case, who is predictably too stupid to be an actual criminal, yet is still hilarious nonetheless.

After some clawing and scraping for evidence between both Peyton and Babineaux, Liv eventually has visions that tell her about the location of a major supply house for Mr. Boss, as well as putting Babineaux on the trail of evidence that tracks down the victim’s boyfriend, who is believed to be the killer. Surprise though, he turns out to be innocent, despite the convincing evidence against him. This was a pretty good twist, even if the episode could have had the case-of-the-week simply involving a chase for him, and it was almost better to have the real killer, another stripper concerned for her own boyfriend being ratted out by the victim’s testimony against Mr. Boss, murder the victim impulsively and in a fit of passion. It’s always cool when the cops on this series seem to struggle with a murder that appears to be very ornate and well-calculated, when in reality, the victim was just unlucky, and found themselves in a bad situation that they can’t get out of. There’s a bittersweet aftertaste to those cases, and it continues to work well here. 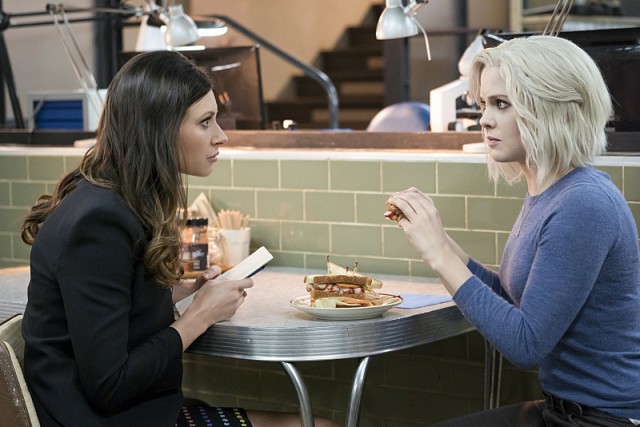 The real highlights of this episode came with the numerous reveals that each character experiences, as they begin to learn shocking truths about each other. Before that though, the aftereffects of the prototype cure are shown on Blaine, who has now become amnesiac and good-natured, as well as once again losing his zombie state. Blaine genuinely can’t remember who he was, despite Peyton still wanting to put him behind bars, and this is a pretty unexpected conflict for his character, who was on the verge of making a big power play against Mr. Boss. This new direction is a strong curveball for Blaine’s character though, especially when it sets his underlings up to steal the power from under him, with his human associate even zombifying himself for the occasion! Oh dear.

Other revelations came however when Liv starts tracking down Drake’s final whereabouts, before he was taken by Major, leading to Drake’s mother, who seems to confirm that Drake is dead. Liv, like Drake’s mother, believes that Mr. Boss killed him, not knowing that he’s been alive and protected by Major this entire time, and the sequence of looking at Drake’s photos together was pretty charming. This also provides a good excuse for Liv to learn that Drake is an undercover cop, despite her being about to confront him for being a criminal. This will no doubt effectively throw Liv for a loop over the season’s final few episodes, especially with Drake still being missing.

Even larger however is Ravi being put onto the trail of Major’s secrets as the so-called ‘Chaos Killer’, with Ravi eventually resolving to break into Major’s safe. After a long while of trying, Ravi finally gets in, and finds all of the evidence he needs to prove that Major is the so-called killer that Seattle is up in arms about. The resulting confrontation is very powerful, as Ravi comes right out and demands that Major explain himself. Before long however, Major prepares to go full zombie and kill Ravi, before Ravi knocks Major out with his own drug compound, and tells Liv that Major has reverted back to his zombie state. Problems seem to be mounting for both Liv and Ravi now, who are both burdened by terrible secrets as the season begins to approach its climax.

“Pour Some Sugar, Zombie” did a fantastic job of continuing to up the stakes of iZombie for the season’s final few episodes, though without sacrificing the sense of fun in the process. Liv’s latest brain provided some early doses of good comedy, which helped to offset the shocking, dramatic reveals that came towards the episode’s conclusion. Now that Ravi has learned the truth about Major, Liv has learned the real deal about Drake, and Blaine’s underlings are preparing a coup, the season is heating up more than ever!

iZombie 2.16: "Pour Some Sugar, Zombie" Review
iZombie delivered a busy, yet incredibly satisfying episode this week, as Liv has some fun with stripper brain, and Ravi learns the terrifying truth about Major.
THE GOOD STUFF
THE NOT-SO-GOOD STUFF
2016-03-30
91%Overall Score
Reader Rating: (0 Votes)
0%