Arrow provided a reprieve from some of its heavy drama lately in, “Beacon of Hope”, a more light-hearted episode that featured a premise that was all about enjoyable superhero thrills. Furthering this effort was the villain-of-the-week being a familiar face from The Flash from last season, specifically Emily Kinney’s Brie Larvan/Bug-Eyed Bandit, who uses her robotic bees to take over the Palmer Technologies building, and hold its board members hostage.

You’ll never believe how Brie gets out of prison either. For whatever reason, the judge allows her up to a half-hour of computer time, on computers that are somehow connected to the internet (do high-security prisons really just allow inmates to go and do whatever on the internet?), which of course allows her to easily hack her criminal records and escape. Seriously?! I hope that judge was promptly fired, because it takes a special kind of stupid to allow a criminal genius hacker/roboticist anywhere near a computer while they’re in jail, especially one that’s connected to the internet! 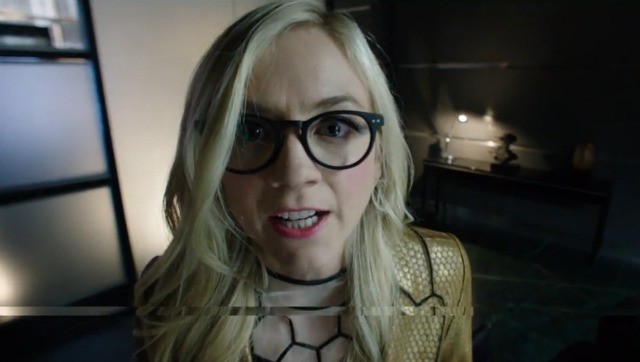 Regardless, with Brie at large again, she immediately leaves Central City and hoofs it to Star City instead, where she infiltrates the Palmer Technologies building with a new swarm of robotic bees, now controlled directly with her mind via neural implants (how did she perfect that technology while in prison, exactly?), and demands an audience with Felicity Smoak. Brie wants the bio-implant chip that Curtis invented to allow Felicity to walk again, and she’s giving Felicity a very limited window to deliver the only prototype, which happens to be in Felicity’s spine, to the villain, before she starts killing captive board members.

This is actually a very good premise for an Arrow episode, one that combines a claustrophobic thriller with a large-scale horror story. Not only that, but the premise, and the light-hearted villain from The Flash, provided lots of opportunities for good tongue-in-cheek dialogue and humour. Emily Kinney is still pretty over-the-top hammy as Brie, but there’s an undeniable cheeky charm to her character, even if she’s almost completely unlike her male counterpart from DC Comics lore. 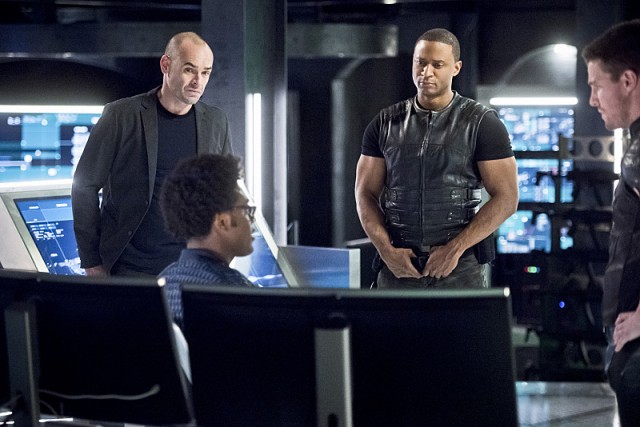 With Felicity also hiding out with Donna and Thea at the time of Brie’s attack, Oliver, Laurel, Diggle and Captain Lance are at a loss as to how to enter the building, since even the SCPD are helpless to get through the swarm of robot bees. Fortunately, a blessing in disguise comes along, when Curtis reverse-engineers the cellphone that he used to help rescue Ray Palmer before his departure to Legends of Tomorrow this season, using it to locate the hidden Arrow Cave, and immediately see everyone conveniently out of their masks. After a brief fainting spell, Curtis manages to talk his way into helping the team get through the bees by hacking them, though of course, Brie won’t be so easily bested.

It was no doubt inevitable that Curtis would eventually make his way to Team Arrow, given that he’s a re-imagined version of DC superhero, Mister Terrific for The CW’s DC Television Universe, and his serving as a replacement for Felicity for however long is pretty entertaining. Curtis provides a throwback to the awkward early days of Felicity’s career with Team Arrow, and his annoying personality also provided a good way for Oliver’s frustrations with Felicity to yet again come out… Mostly.

Sadly, the plot comes to a halt every so often in this episode, to spout more woe about the break-up between Oliver and Felicity. Things ended pretty definitively during last week’s episode, and as sad as it is, it looks like these two are never getting back together. That’s why it’s kind of annoying to have the show keep acting like it has a stake in a dead relationship. True, Oliver and Felicity are not going to immediately get over their angst, but when Oliver starts berating Curtis for having his head out of the game from a few cracks, simply because he’s angry about how things went down with Felicity, he comes off as a bit of a hypocrite. Maybe that’s the point, but the dialogue about characters still trying to salvage Ollicity in some way is starting to overstay its welcome. If Oliver and Felicity are going to stay broken up, then the show should just let sleeping dogs lie and be done with it. 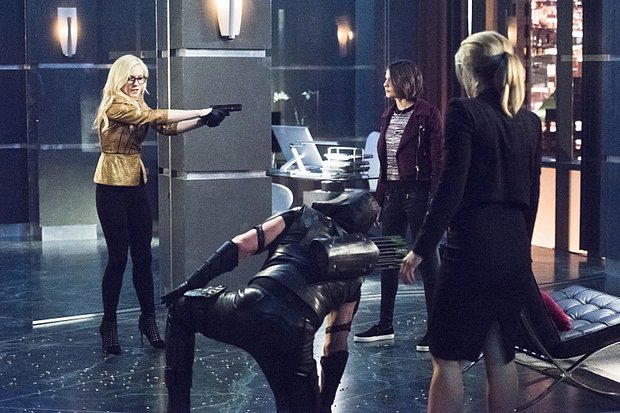 Eventually, after some effectively tense infiltration and fleeing from the various forces of Team Arrow, along with some smart hacking know-how from Curtis, it comes out that Brie wants the chip because of a tumour in her spine, which can be removed with surgery, except the surgery will render her paralyzed from the waist down. I’m not sure if that’s truly a thing in the medical field, but whatever. She gets the schematics for the chip, though when she realizes that Felicity was the hacker who led to her being taken down by The Flash last year, Brie comes back ready to kill Felicity, with Oliver intervening at just the right moment to save the day, with some help from Curtis in subduing her. The good work has Curtis officially welcomed into Team Arrow, and Brie lingering in a coma at Starling General Hospital for now. Damn, Curtis, you might have overdone it a bit there! Anyway, this all has Curtis taking another step to hopefully becoming a new version of Mister Terrific, even though I doubt we’ll see that happen before the now-confirmed Season Five later.

Another strong story element to this episode was the latest Damien Darhk plot, as Darhk is imprisoned in Iron Heights, and finds himself powerless, as the inmates beat him down and refuse to take him seriously. Showing how Darhk is a lot more helpless when simply taken out of Star City was pretty interesting (even if the loss of his magical abilities sure hindered him as well), though when he’s visited by Merlyn, we still get a great glimpse of why Darhk is such an effective villain. After Merlyn confirms that H.I.V.E. is severing all ties with Darhk, and proceeding with his grand plan without him, Darhk pulls some strings to threaten the grandmother of Murmur, another returning villain, though one properly from Arrow this time. Darhk’s power play leads to Murmur slaughtering his thug buddies and becoming Darhk’s new enforcer in prison. This also comes just in time for Merlyn to pay another visit to H.I.V.E.’s apparent new executive, who is none other than Andy Diggle! The episode ends on this rather shocking note, which could spell doom for John Diggle next week (could he be the one to die this season?), though it’s equally possible that Andy is a mole that’s ultimately working for the good guys too.

The flashbacks continued to take an interesting turn this week as well, as we see Oliver and Diana try to take down Reiter, despite the life force he absorbed from the dead prisoner now rendering him immune to gunfire. Diana is knocked out, and Oliver briefly fights Reiter, though right when it looks like Reiter is going to drain the life force from Oliver, Constantine’s protection spell presumably intervenes, and Reiter is left stunned, allowing Oliver to knock him out. When Oliver wakes Diana up though, Reiter disappears, leaving the two to face a squad of Reiter’s men that are closing in on their position. This made for some pretty exciting flashback material, as Reiter’s endgame seems to have been revealed, and the villain is now clearly more dangerous than ever! 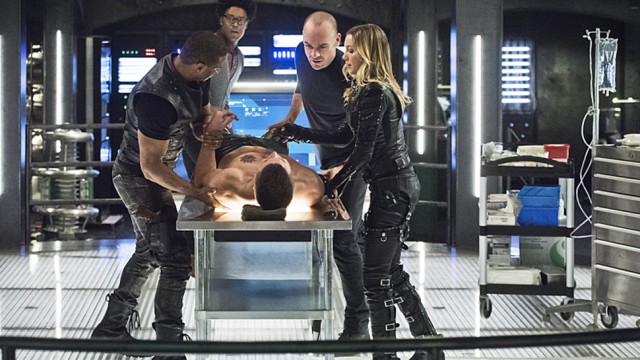 Despite a handful of contrived and tedious elements, “Beacon of Hope” was a pretty entertaining episode of Arrow, proving to be a good time for a series that is effectively learning to embrace its more humourous and fun side this season. Perhaps the big Season Four death is being planned for next week, which would make sense, since it adds up with the midseason premiere’s time stamp, will occur on the day of the, “April 6th Election” (the airdate of the episode), and will punctuate the extra week that Arrow is taking before another three-week hiatus, despite sister series, The Flash starting its three-week hiatus after this week. That will no doubt explain the good, clean sense of fun throughout much of this episode, as if it’s giving the show’s cast a good proper romp together, before one of them is bound to end up dead and buried very soon. Captain Lance still seems mostly likely to buy the farm, given his recent career suicide, though Andy’s meeting with Merlyn also seems to tease that Diggle may ultimately be the one to die.

With Darhk rising again in prison, and Team Arrow welcoming a new member, we’re bound to find out very soon.

Arrow 4.17: "Beacon of Hope" Review
Arrow brought back a villain from The Flash to produce a good, if slightly contrived episode this week, providing a good sense of cheeky, old-fashioned fun, as Palmer Technologies finds itself taken hostage by Brie Larvan!
THE GOOD STUFF
THE NOT-SO-GOOD STUFF
2016-03-31
76%Overall Score
Reader Rating: (0 Votes)
0%