Better Call Saul really knocked it out of the park last week with the standout, “Inflatable”, though the show seemed to slip a bit in, “Fifi” this week. The episode was still great, mind you, having particularly awesome story material for Jimmy, Kim and Chuck alike, but a less interesting Mike storyline sadly dragged down the episode.

What happened with Mike this week? Well, he pokes around the business of Hector Salamanca for a bit, then has his granddaughter help him build a homemade spike strip (she doesn’t know that’s what it’s going to be, in fairness), and Mike puts the spikes in as the episode concludes, and that’s Mike’s entire storyline. As much as this presents a promising potential story for the season’s last two episodes to come, it doesn’t change the fact that the current state of Mike’s storyline was pure filler this week. Season Two of Better Call Saul in general doesn’t seem to be balancing Jimmy’s and Mike’s storylines with quite as much panache as Season One did, but as long as Mike treading water this week leads to something good later, maybe it will be more forgivable when people can just subsequently binge-watch this season on Netflix starting next year. 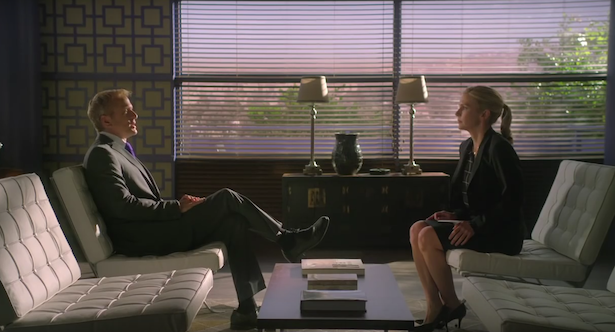 Once again, it’s Jimmy that’s continuing to occupy his rightful spotlight, though Kim also once again played a big part in proceedings this week. Turns out, Jimmy agreed to Kim’s proposal to have separate law firms in the same building, after the cliffhanger ending to last week’s episode, and the two begin scouting a former dentist’s office for their new base of operations. Jimmy warns Kim however that, if she doesn’t act fast, HHM will steal her valuable new client, Mesa Verde right from under her, immediately after word gets out that Kim is resigning to start her own practice.

Jimmy turns out to be correct as well, as Kim must literally dash to her phone after handing in her resignation to Howard, in order to arrange a lunch with the client that continues to go well. It turns out to be for naught though, when Howard warns Chuck that they are about to lose Mesa Verde, and Chuck makes the shocking decision to show up at the firm, even with lights and phones all present in the vicinity! Looks like Chuck is very serious about preserving the integrity of HHM, no matter what the cost!

This led to a very exciting struggle for the client between Kim and HHM, especially when Chuck’s argument appeared to promote Kim as the right option for Mesa Verde at first. Soon though, it becomes apparent that Chuck is employing reverse-psychology in a very devious way, and his argument eventually convinces Mesa Verde to stick with HHM and not go with Kim, making Howard’s, “Hard sell” look completely ineffective in comparison. This was a great display of just how amazing a lawyer that Chuck can be, especially when he’s provoked, though it comes at a hefty cost for Kim, even if Chuck’s exposure to lights and cellphones does eventually force him to be carried out of the HHM building.

Jimmy meanwhile is up to his old shenanigans, in preparation to start his own practice. How will he do this? By shooting another commercial, of course! This provided another welcome dose of comic relief for the show in this episode, as Jimmy has one of his retired elderly clients (someone from Sandpiper Crossing, maybe?), pose as a military veteran who has been rendered paralyzed and mute from a stroke, when in reality, it’s just a guy that Jimmy helped get off of a public masturbation charge, who is perfectly capable of walking and speaking. Jimmy’s favourite film students also appear on hand to shoot the ad, and after sending the escorting soldier away for a water, the group has a very funny scene of attempting to make a commercial for Jimmy’s new practice, when no one seems to want to listen to direction. It then ends with a group of soldiers wanting a photo with the, “Veteran.” These fun little moments with Jimmy are great, and they’re more necessary than ever lately, with Better Call Saul veering noticeably further into dramatic territory over the past few episodes.

Jimmy’s most brilliant moment however came towards the episode’s climax, as he checks in with an unconscious Chuck, then sends away Chuck’s caretaker. After seeing the Mesa Verde documents, Jimmy grabs some of them, takes them to a copy store, and, with some devious trickery, re-arranges the addresses on some of the forms. This is a surprisingly brilliant way to get back at Chuck and HHM for nicking Mesa Verde from Kim, and hopefully, as with Mike’s storyline, it leads into a strong climax that will close out Season Two on a high note over the next couple of weeks.

“Fifi” definitely isn’t the strongest episode of Better Call Saul, even just within this season, but it’s continuing to give renewed, more appealing focus to Jimmy’s character, and that’s a good thing. The show is starting to lay the groundwork for Jimmy and Kim’s new firm to make a powerful enemy out of HHM, just as Mike is no doubt on the verge of ending up on Hector’s bad side before long. It will be interesting to see if Season Two ultimately ends on a positive note or a negative note for its lead characters, but even if the season will close out with a happy ending for at least one side, it seems like everyone involved is going to be in for quite a battle beforehand.