NOTE: This review may contain mild spoilers for Part One of “The Ranch.” With that said, the review is written to accommodate those who have not yet watched the series, and as such, will avoid discussion of major plot developments.

My brother raised an interesting point about Netflix sitcoms recently. He claims that, “It feels like almost every Netflix comedy is primarily made for hipsters.” Honestly, I think he’s got a point too. With the exception of Unbreakable Kimmy Schmidt, the one Netflix sitcom that seems to be perfectly fine with being a straight-up sitcom (and is ironically one of Netflix’s strongest comedy shows for it), and I suppose Fuller House (even if it’s awful), it feels like almost every supposed ‘sitcom’ that Netflix green-lights for their service is trying very hard to be subversive, and stand in stark contrast to how syndicated television sitcoms are presented. On top of all of that, almost all of them, even standouts like Master of None, seem to be afraid of being traditional, or purely focusing on being funny, sometimes to the detriment of the concept, as we recently saw with the ill-fated first season of Flaked.

This odd issue seems more apparent than ever with The Ranch, a Netflix sitcom that bills itself as a slightly low-brow reinvention of classic family values-themed comedy shows from the 80’s and 90’s, yet strangely also feels the need to pass itself off as a Middle America-themed drama. Like Flaked, The Ranch somewhat suffers from an identity crisis in this respect, since it’s not sure if it wants to be a serious commentary on rural living and rural American family values, or a raucous, occasionally raunchy spoof of classic family-driven sitcoms. It presents one of the biggest cases of Netflix possibly needing more simple upbeat comedy shows, because it feels like too many of the supposed comedies that the service currently hosts either can’t commit to one side of the spectrum or the other, or just flat-out need to lighten up. 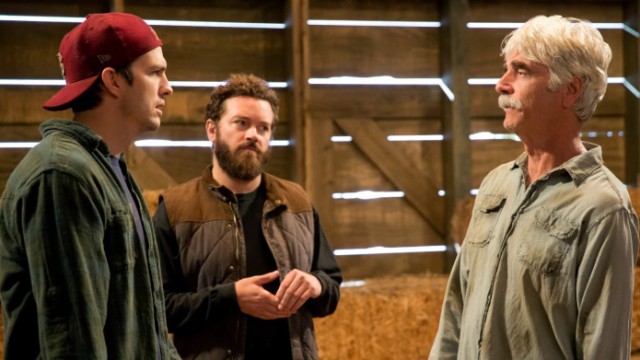 That said though, one definitely can’t say that The Ranch is bad. It’s quite adequate. It never really moves above and beyond being merely adequate in its initial batch of ten episodes, strangely billed as ‘Part One’ instead of ‘Season One’ for whatever reason, but it’s worth watching, especially if you’ve noticed the great cast behind it. Highlighted most are Ashton Kutcher and Danny Masterson, who are reuniting after being co-stars on beloved 2000’s sitcom, That 70’s Show, and are both serving as not only stars on The Ranch, but also executive producers.

As much as the show wants you to notice Kutcher and Masterson the most, who are generally pretty good at both the comedy and the drama when the situation calls for it, it feels like they’re slightly overshadowed by their on-screen parents, Sam Elliott and Debra Winger. Elliott in particular naturally invites himself to this premise, with his old-fashioned country persona, though he’s definitely not a lovable cowboy here, instead being Beau Bennett, the workaholic, no-nonsense and perpetually grouchy father to Kutcher’s Colt Bennett and Masterson’s Rooster Bennett. As you can imagine, the father/son dynamic on The Ranch is the most noticeable thing that appears to have been lifted from the sitcoms of yesteryear, as the father and sons inevitably clash about generational beliefs, politics, and the fact that Beau is constantly riding or ignoring his sons, depending on the situation.

While some of these moments can be funny, there’s no denying that, in its effort to capture a sense of nostalgia, The Ranch veers too far into familiarity with its jokes. Many of the gags are telegraphed in advance, and you can predict several of the punch lines long before they happen. The show tries to get around this by inserting F-bombs and crude or more aggressively sexual jokes, obviously taking advantage of the FCC being unable to police Netflix, but this doesn’t really help give the show a better sense of identity. Worsening the jokes that feel too obvious and uninspired are the very liberal use of a canned laugh track, which is very annoying, and only makes the show feel like it’s straining harder for laughs when it’s just failing to stand out from other, better sitcoms, even those of former eras. Honestly, it might have been better if the show was done in a way that didn’t necessitate a laugh track, and just billed itself as the dramedy that it clearly wants to be, rather than a full-fledged sitcom.

The drama is often brought to the fore when the guys struggle with keeping their ranch afloat. Times are predictably tough for the Bennett household, as their livestock and crops aren’t coming in at the necessary times or prices, and this constantly seems to have them in a sense of financial woe. Colt almost achieved fame and fortune as a Canadian football star, but he’s forced to move back in with Beau and Rooster, and this seems to make him the scapegoat for both of their issues, highlighting him as an apparent failure, despite Rooster appearing to be lazier and wholly unambitious. You can still see shades of Michael Kelso in Kutcher and Steven Hyde in Masterson from their That 70’s Show days, but The Ranch tries to paint those personalities in a more sobering, real-world light, which it does better than you would think, helping to compensate for the uneven joke quality in these first ten episodes. 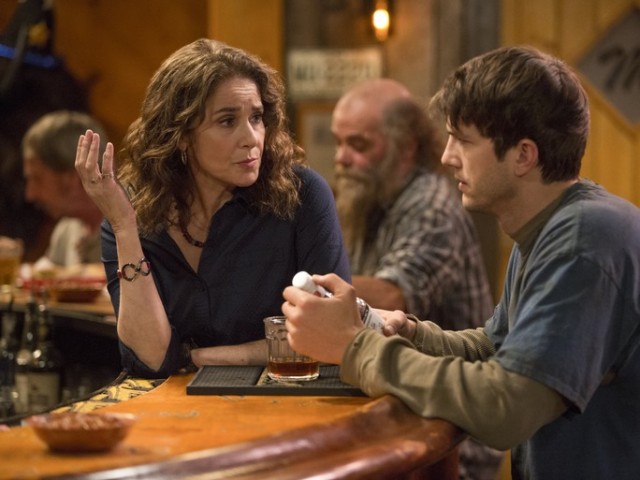 Another source of the show’s better sense of drama comes courtesy of the female leads, namely Debra Winger as Beau’s independent and blunt wife, Maggie, along with Colt’s ex-girlfriend, Abby, played by Elisha Cuthbert. Maggie feels like the show’s most forward-thinking character, being faithfully married to Beau, but refusing to live with him, especially since she believes that it would ruin a relationship situation that is leaving them both stable and happy the way it is. Abby, meanwhile, has found a boyfriend that she is truly in love with, and is a ‘cool girl’ type that forces Colt to re-think his place in life, especially when he reunites with the one that got away. Winger and Cuthbert are both likable, and add some charm to the show whenever the boys threaten to make it too angry and low-brow, as does Colt’s rather young new flame, Heather, played by Kelli Goss, making the ladies presence welcome, especially since they get to best enhance the show’s dramatic moments.

It seems odd that a low-brow sitcom like The Ranch would succeed more at the drama than the comedy, but strangely, it’s true. It’s when the show deals with serious subject matter that it’s ironically at its strongest, as the Bennett family must face hard issues and hard times. Even the show’s title sequence, when viewed without context, seems like it belongs in a drama series, not a comedy series. It begs the question of why The Ranch even attempted to be funny, if it obviously had so much more inspiration with the dramatic elements. The characters’ struggles are genuinely relatable and emotional for many viewers, even those not living in the rural American landscape, and they often engage the most when you’re hoping for their continued survival, not seeing Colt and Rooster find new ways to insult each other, and Beau keep finding new ways to tell them that they’re both idiots, like a rural Red Forman who finally learned to curse all the way.

The Ranch is a show that clearly has plenty of room to improve, especially in its balance between comedy and drama, since it’s skewed too much towards the latter, and not enough towards the former. With a presumed Part Two possibly on the way later this year, hopefully the show achieves a better balance between the two genres in its next batch of ten episodes. Failing that, the show might need to just commit to one direction or the other, since that would hopefully mean that it cuts out the pretense of being a goofy comedy, or, more likely, it focuses on better jokes, and cuts out the drama. I can see plenty of people feeling that The Ranch is ultimately a bait-and-switch in Part One, since it’s advertised as a goofy low-brow sitcom, yet comes off as feeling like a more grounded dramedy that’s too good at being serious, and not good enough at being funny. This series deserves better, but I will hold out hope that Part Two will be more refined and worthwhile, or at the very least, funnier.

The Ranch: Part One Review
The Ranch's sitcom stylings are often predictable and uneven, though it's still got enough laughs to get by, even if the drama and performances strangely become the show's real star in its first batch of episodes.
THE GOOD STUFF
THE NOT-SO-GOOD STUFF
2016-04-07
67%Overall Score
Reader Rating: (0 Votes)
0%