Arrow has been in a small slump over the past several episodes. Not a large slump, but a small one, especially considering how superb some of the episodes from earlier in Season Four turned out to be. That changed with, “Eleven Fifty-Nine” this week, an episode that serves as a high point for the season, though also a very tragic note. Yes, at last, that mysterious death that’s been teased all season finally occurs, and its ripples will no doubt be felt across The CW’s entire DC Television Universe.

Obviously, the big character death is the most memorable element of the episode, especially since the character that buys the farm has been a series mainstay since this show’s first episode back in 2012, but plenty of other awesome story elements occurred throughout this week’s episode, which has Arrow in a very strong position as it enters a two-week hiatus until returning to the airwaves on the 27th. The family drama particularly stood out, as Captain Lance struggles to stay useful after his suspension, Thea must directly do battle with Merlyn after he comes to the aid of Damien Darhk, and Diggle squabbles with Oliver over Oliver’s suspicions that Andy is a traitor. 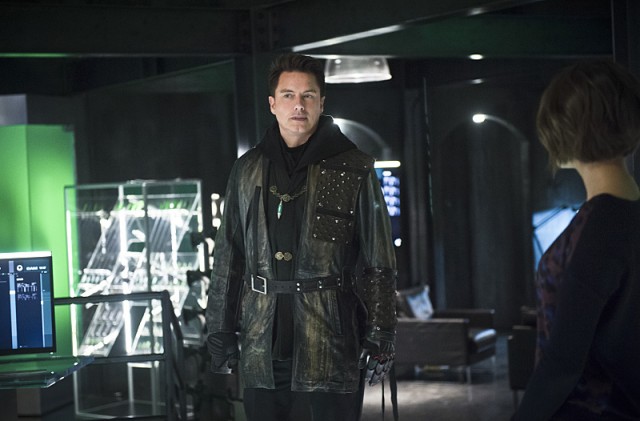 This all comes after Laurel is given a surprising job offer by Ruve, who wins the seat of being Star City’s new mayor, after Oliver pulls out of the race. Ruve wants to appoint Laurel as the city’s new district attorney, a job that she’s initially intent to reject, though Oliver convinces Laurel to abandon her mantle as Black Canary to take the job. Surprisingly, it’s Captain Lance that seems to be more in favour of Laurel staying on as Black Canary, though ultimately, she decides to take the position, which would give her a way to protect the city in the light.

After that’s decided, Oliver and Diggle find themselves in yet another argument, when, as I mentioned, Oliver becomes suspicious of Andy. After the way last week’s episode ended, Andy is indeed looking suspicious, though early on in the episode, he immediately tells Oliver about his meeting with Merlyn, and how Merlyn wants to break Damien Darhk out of prison. This seems to exonerate him from suspicion in Diggle’s eyes, though Oliver still doesn’t buy it, even violently attempting to hurt Andy at one point, in order to get answers out of him. This leads into Diggle forcing Oliver to trust Andy, especially after Andy ends up saving Oliver from a trap when the group attempts to prevent Merlyn from bringing an idol to Darhk that will restore his magical abilities, which has Oliver walking into an ambush, and nearly getting an arrow in the heart!

Apparently, Oliver and Diggle’s hunts leave the bunker vulnerable though, and this forces Thea and Laurel to try and fight off some remaining League of Assassins sympathizers who are in service to Merlyn, after Merlyn goes to steal the idol from them. Merlyn succeeds, but fortunately, there’s a piece missing. Despite that however, Darhk, with some help from Murmur, instigates a riot at Iron Heights, forcing Team Arrow to intervene, and Laurel saying that she’ll don the Black Canary mask one last time. Ominous? Perhaps.

The subsequent scene of the team fighting through Iron Heights was pretty exciting, and served as the best action scene in an episode that had a good helping of solid action in it. It’s here where the episode brings everything together into a superb climax as well, as Darhk ends up in a tense stand-off with Team Arrow, and Andy ends up handing over the missing piece of the idol. Turns out, Oliver was right, and Andy was indeed working for Darhk the entire time. With Darhk’s magic restored, everyone is paralyzed, and Darhk is about to walk free with at least fifty inmates from the prison. Before he does however, he talks to Laurel about keeping his promise to Captain Lance if Lance betrays him (which he did), and stabs Laurel through the chest with an arrow!

Laurel is rushed to surgery, but fortunately, seems to be alright. This gives her a chance to reflect on her time with the team, and in particular with Oliver, leading to some fantastically emotional scenes that really illustrate just how much Laurel has contributed to the various character arcs throughout the series. After a scene with Oliver where she asks him to keep a promise however (apparently, we won’t know what it was until Season Five, according to the showrunners), Laurel subsequently starts coding, and right before Captain Lance can join everyone, Laurel’s heart stops, and she’s declared dead. Yes, after miles of speculation from fans, it turns out that the big death that’s been teased since the start of the season was Laurel’s.

Obviously, the emotions that result from this are very potent, even if it probably won’t result in the fan riots that no doubt would have occurred if it was someone like Felicity or Diggle that had died. Everyone’s performances were top-notch here, with Captain Lance’s staggered reaction of barely being able to stand being a highlight, as the loss of Laurel appears to destroy him forever, particularly after the trauma of losing Sara twice, before Sara went off to travel through time with Rip Hunter on Legends of Tomorrow. The showrunners have claimed that Laurel’s loss will be felt with Sara on Legends of Tomorrow soon, and will probably have an effect on The Flash when it returns on the 19th as well, and it’s well-earned here. DC Comics fans will no doubt be miffed that the show killed off Black Canary, since Green Arrow and Black Canary are often lovers, spouses and bona fide soulmates in DC Comics lore, but it did feel like Laurel’s story had come to a natural end here, and there’s always the chance that the Black Canary mantle could be taken up by someone else on Arrow, if it doesn’t open up a position for Curtis to finally fully join the team as DC hero, Mister Terrific. 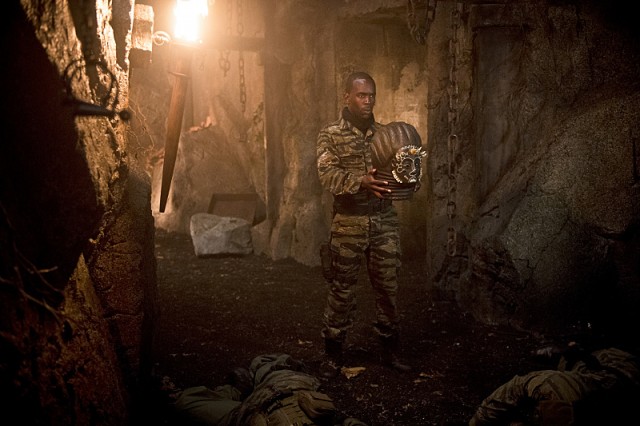 The flashbacks were also quite superb this week, and tied in nicely with the stakes that were going on in the present day. They even tied back nicely to Oliver keeping the picture of Laurel as a means of surviving Lian Yu, though there wasn’t much time to dwell on this, as Oliver and Diana did their best to survive Reiter’s men. Successfully fighting through them and escaping the underground area, the two manage to free more prisoners, and Oliver orders them to make a break for the boats, as he triggers an explosion that attempts to bury Reiter alive. As Reiter kills and draws more power from his men though, this likely won’t be enough to keep him down. Seeing Reiter’s power and menace continue to grow as he achieves his magical ends is proving to be very thrilling, especially since we know that Oliver no doubt won’t escape Lian Yu with Diana and the other prisoners, since it’s too soon in the past timeline.

For an episode that was all about a big, long-teased tragic loss for the team, “Eleven Fifty-Nine” definitely earned its sense of ceremony. This was an excellent episode, and the best Arrow episode in months, easily. Even with the show taking two weeks off from here, and returning at the end of the month, this is a strong note to keep fans buzzing on, as Laurel’s death forever changes the dynamic between the lead characters, and both Damien Darhk and Malcolm Merlyn achieve a new level of danger as big bads as a result. The betrayal of Andy is also a great high point as the season approaches a climax, and Diggle’s hand in Laurel’s death is bound to haunt him well into Season Five. If you feel that Arrow has been wanting for stakes lately, consider the stakes elevated.

Arrow 4.18: "Eleven Fifty-Nine" Review
Arrow said goodbye to one of its longest-standing characters this week, as Damien Darhk kills a valuable member of the team, leading to one of the best episodes of the season.
THE GOOD STUFF
2016-04-07
96%Overall Score
Reader Rating: (0 Votes)
0%