Amidst the many television projects that Marvel now has ongoing and in development between Netflix and ABC, another is officially on the way, after spending quite a few years in development hell. Cloak and Dagger has been ordered straight-to-series for the newly re-branded ABC Family network, now called Freeform, and is currently seeking a writer to pen its initial episodes.

Cloak and Dagger was first planned for television as far back as 2011, again for ABC Family prior to its recent re-branding, and was one of the first Marvel Television projects to be developed for the Marvel Cinematic Universe that had already flourished in movies for several years at that point, before the show went into turnaround. Ultimately, Agents of S.H.I.E.L.D. ended up succeeding Cloak and Dagger as the first MCU-set television series, on the main ABC network, or CTV for us Canadians. Currently, Canadian broadcast plans for Cloak and Dagger are predictably unknown.

Cloak and Dagger, as with the Marvel Comics that inspired it, will revolve around Tyrone “Ty” Johnson (Cloak) and Tandy Bowen (Dagger), two adolescents who are given the respective powers of engrossing darkness and sharp light bolts, which can both harm and heal. In more recent Marvel Comics lore, the two were latent mutants who had their abilities activated by an experimental drug, though given that 20th Century Fox still owns the X-Men film rights, and now the primetime television rights, the mutant element of the two characters no doubt won’t be a part of the Cloak and Dagger television series. After the two discover their abilities, they fall in love, and develop a budding relationship as they battle criminals together, which will also be a focal point in the television adaptation.

Cloak’s powers are particularly noteworthy as well, since they tie into the Darkforce dimension, a story element of Marvel lore that was already a focal point in the MCU, during the now-wrapped second season of ABC television event series, Agent Carter. It’s also believed that the Darkforce dimension will be a plot element in this November’s Marvel Studios movie, Doctor Strange. 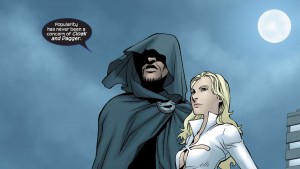 Predictably, Marvel Television and ABC Studios will be co-producers of Cloak and Dagger. The series is said to be primarily targeting a 14-34 age demographic, though will no doubt be enjoyable to even older Marvel fans as well. Apparently, the series is targeting a debut in 2017.

Keep illuminating Eggplante for all major news and updates on Cloak and Dagger, and other television projects for the Marvel Cinematic Universe.