Supergirl was floundering pretty noticeably in the disappointing penultimate episode of Season One last week. Fortunately, this week’s season finale, “Better Angels”, was an improved episode, with a (mostly) satisfying resolution to the seasonal storylines, a thrilling duel with the villains, and another lovable moment of heroic triumph for Kara. In terms of closing out the season, the episode was merely good, rather than truly great, but it’s certainly true that Supergirl’s first season could have easily concluded on a worse note, especially given some of the unfortunate misfires that this season has suffered through every so often.

Carrying over from the events of last week, the episode begins with Kara having to fight her sister to the death, after Alex is taken control of by Non using Myriad. This seems like it’s going to be a big defining moment for the Danvers sisters… But it’s not really. In fact, it’s resolved in kind of a cheesy, tedious fashion, as Hank conveniently flies Eliza to the scene, using his mental shielding to protect her from Myriad. Eliza then says that Alex loves her sister and wouldn’t do this, and eventually, that’s enough to snap Alex out of it. Oh, come on, seriously? Considering how much Myriad has been hyped up, it really seems to have quite a few design flaws, especially if something as simple as the power of love can defeat it. That’s just lame. 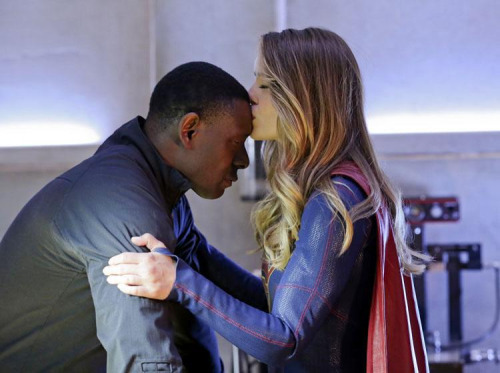 In fact, that major problem with the climax of the season is still apparent in this episode; The fact that Myriad kind of sucks as an endgame for Non and Indigo. Amazingly, or perhaps due to contrivance, Supergirl’s plan to broadcast a hopeful message across the world simultaneously, on every screen on the planet (somehow) works, and snaps everyone out of Myriad, and that’s the end of it. It’s kind of a dumb resolution to Non’s big plan, honestly, though the turn of Non deciding to amplify the signal in order to simultaneously kill every human on the planet, and leave Kara (and I suppose Superman and Martian Manhunter too) on a dead planet, was kind of a neat hook for this season finale, even if it did yet again have Non flip-flopping as to whether or not he wants to save humanity, or destroy it.

Too bad this was also a pretty underwhelming plan, especially when the show once again had to find a forced excuse to incapacitate Superman for the season’s big final battle. Apparently, the Man of Steel was somehow rendered unconscious from Myriad, something that doesn’t even happen to the humans across the world, anywhere, and you can just tell that the writers had no good ideas for benching Superman, so they just made up a dumb excuse. Either that, or Superman just really, really sucks in the Supergirl universe. Again, this begs the question of why the writers didn’t just leave Superman off-world. It’s better to claim that Superman was simply unaware of Myriad going into effect, rather than trying to say that he wanted to stop it, and just wasn’t able to. That’s total bullshit, and even the most casual of DC fans can easily see that. 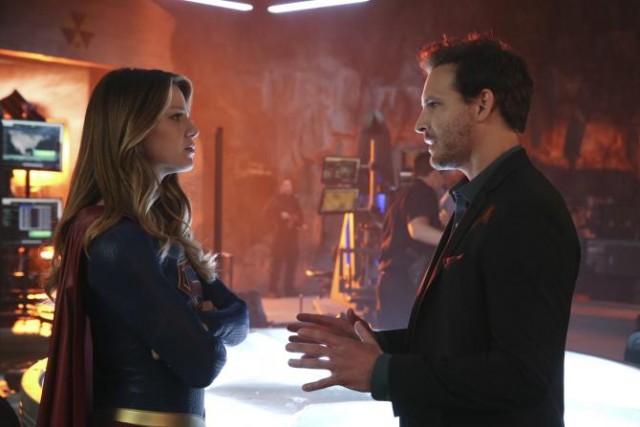 Fortunately, the rest of the episode’s working parts weren’t too bad. When Maxwell Lord points out that Kara will likely be going on a suicide mission to stop Myriad, the sequences of Kara making her peace with Winn, James and Cat all made for great, effectively emotional scenes. Likewise, the final battle with Supergirl and Martian Manhunter, against Non and Indigo, was pretty enjoyable as well. Seeing Kara out-heat vision her uncle and fry his brain was pretty satisfying, even if it’s kind of vague as to whether Non survived or not. Likewise, seeing J’onn be a badass and rip Indigo right in half with his bare hands was pretty cool, and made for some appealing moments to help mask the television-level effects that the season’s final battle predictably has to make do with.

When the villains are defeated however (Non’s other Kryptonian buddies are conveniently just loaded onto a pod and shot into space, suggesting that he’s either very arrogant, or very ill-prepared for Kara), Earth’s population finds itself about to die from exploding brains, due to the overloading of Myriad. Left with no other option, Kara has to fly Fort Rozz, the source of the signal, into space, even if it means that there’s no atmosphere and no gravity, pretty much guaranteeing that Kara will die. Sure, this flies in the face of DC Comics canon, where Superman at least flies through space fairly regularly, but I suppose that the rules of the Supergirl universe aren’t the same. 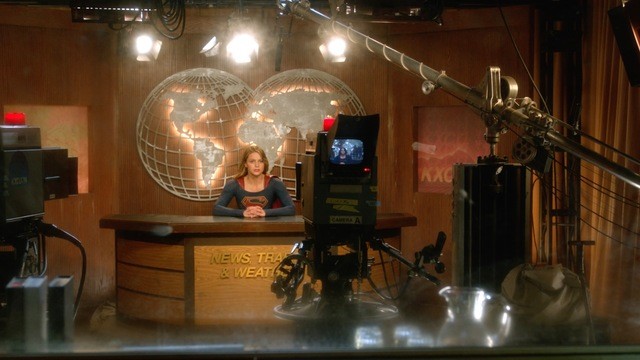 Regardless, Kara makes her big heroic sacrifice, which J’onn can’t assist with, due to being injured in the fight with Indigo. Fortunately though, Alex flies Kara’s pod up into space, despite it being an escape pod with no actual flight controls, and no means to fit both women inside, but who cares, since it immediately cuts to Kara waking up in the DEO infirmary. Yeah, it’s another bullshit contrivance, but I suppose that we can’t go killing off the title heroine of this show, even if it might have been more believable to just have J’onn scoop Kara up, or simply have her fall back to Earth.

So, with the day saved, the Kryptonians and Myriad neutralized, and Superman up and about again (off-screen, of course), Kara celebrates with her friends at home, and even finally embraces her romance with James, after trying to break up with him when she thought she was going to die, but hey, the season’s over, so I guess I can just accept the intense circumstances. Cat promotes Kara as well, giving her a new private workspace with a work position to be decided later (no doubt because the writers haven’t yet settled on one for a hopeful Season Two), and several other hooks are also shown for another season, including Lord recovering the Omegahedron that powered Myriad for himself, with General Lane’s help (nice callback to the Supergirl movie from the 80’s with that), as well as Alex revealing to Eliza that Jeremiah is alive, and that she and Hank/J’onn are going to go to Cadmus and find him. The season finale even ends with a cliffhanger, suggesting a fair bit of optimism from the showrunners about Supergirl’s renewal chances, where Kara and J’onn fly to a Kryptonian pod that has landed near the city. Kara opens it, exclaims, “Oh my God!”, and the season ends there. It’s not a bad cliffhanger, honestly, and sets up plenty of speculation for DC fans to chew on as they wait for CBS to renew the show for another season.

It’s understandable to have modest expectations for Supergirl’s season finale, given that this show currently seems to be trailing the quality of most of the other DC Comics dramas on television right now, but, “Better Angels” managed to close out Season One on a pretty solid note. The season has delivered better episodes than this for sure, but most of the season’s resolution plots were good, beyond the nonsense with Myriad’s shortcomings, and Superman being taken out, plus the hooks that were teased for next season were also pretty promising. Odds are that Supergirl won’t have much trouble getting renewed for a second season, given that it’s the #1 new show of the 2015/2016 season, even if its ratings have dropped a bit since then, so I anticipate further adventures with Kara and the gang to come, especially with promises of Cadmus and a new alien threat on the horizon.

Supergirl 1.20: "Better Angels" Review
Supergirl concluded its first season on a good, if not amazing note this week, thanks to a fun final battle, and some cool teases for a second season.
THE GOOD STUFF
THE NOT-SO-GOOD STUFF
2016-04-19
74%Overall Score
Reader Rating: (2 Votes)
73%