Lucifer has really fired on all cylinders when it comes to the main supernatural struggle centered around its lead character, despite some of this show’s early growing pains with the procedural side, and that started really coming to a head in Season One’s penultimate episode this week, “#TeamLucifer.” This week’s offering has the show furthering mining even more added potential that it just wasn’t tapping in the earlier episodes of the season, and has the show leading in to next week’s season finale on its strongest note to date!

A lot of this was due to Tom Ellis, who crushed it more than ever as Lucifer this week. Ellis has already done a very impressive job at making The Devil himself downright likable in this show, and that’s consistently true when he’s usually playing a funny, flighty and comically careless Prince of Darkness that almost has a twisted innocence about him in regards to moral greys. This week however, a new layer of the character was fully peeled back, delving into exactly why Lucifer left Hell, and finally pushing the character to a breaking point that had him ditching the light-hearted exterior in favour of raw drama, and surprisingly, it really worked.

Something that’s been built up all season is the true purpose behind Lucifer’s departure from Hell, which he initially claimed was simply a want for a change of scenery. This episode finally started digging into that reason, and it did so excellently, especially with this episode boasting the show’s strongest case-of-the-week yet, one that tied in fantastically with Lucifer’s ongoing character conflict. This week dealt with a girl that is murdered by a Satanic sacrifice, and after the evidence starts gradually pointing to Lucifer, the familiar street preacher from several episodes ago (remember him from that quick gag earlier in the season?) starts harassing him, resulting in Lucifer quickly losing his patience with people being so willing to point the finger at him. There’s even a very clever moment that takes a small jab at some people complaining about Ellis’ appearance on the show in contrast to the original Vertigo graphic novels, when a Satanist doorman says to Lucifer, “I thought you were supposed to be blond”, referencing the fact that Lucifer is blond in the Lucifer source comics, but has dark hair in the television show, something small and, frankly, unimportant that rather vocally upset a few fans of the graphic novels.

By the episode’s climax, this torment of Lucifer starts unfurling into a seething, and later explosive rage, as Lucifer finally loses his patience later on, especially since he’s also being tormented by being unable to answer why he’s vulnerable around Chloe (he suspects her of being an angel, but dismisses the theory after examining her back), and eventually just throws up his hands and goes to Lux to drown his sorrows. Malcolm follows him, and Lucifer talks about his eons-long frustrations with humanity constantly blaming him for their evil atrocities. Lucifer admits that he’s a torturer and a keeper of damned souls, but doesn’t condone killing the innocent, or committing damaging evil in his name, and the real reason that he left Hell was that he just couldn’t stand the bad reputation that people had unjustly given him as a maker of evil anymore. This scene of Lucifer admitting all of this to Malcolm at Lux was superb, and Ellis’ tearful, tormented monologue was beautifully delivered.

This also made the subsequent reveal all the more shocking, when Lucifer notices that red paint used at a subsequent crime scene where the victim’s boyfriend was murdered is on Malcolm’s hands. Malcolm had painted, “Morningstar” at the scene, which contributed to shifting suspicion onto Lucifer, and from there, Malcolm admits that he killed the victims, and did so as some sort of twisted gesture of worship to Lucifer. This was a great way to tie together the episode dealing with Lucifer’s frustration with Satanists, who he’s very annoyed at, though doesn’t see as truly evil (even if being worshiped is more his father’s bag, as he puts it), so long as they don’t hurt people. With Malcolm hurting innocent people, Lucifer seems ready to beat him within an inch of his life, before leaving him for Chloe to arrest (notice that Lucifer emphasizes that he merely punishes evildoers and doesn’t kill them), but then Amenadiel shows up, scaring Malcolm off.

The material with Amenadiel was also fantastic this week, as Amenadiel faces a similar feeling of helplessness as Lucifer. Malcolm admits to Amenadiel that he knows Amenadiel can’t save him from Hell, and that Lucifer has given him a better insurance policy, and shortly after, Amenadiel catches Maze about to stab him dead with a Devils’ Dagger, then disappearing and realizing that the affair with her was a mistake. This has Amenadiel dropping the gloves and fully confronting Lucifer in a violent scuffle, one that tears apart a good chunk of Lucifer’s private bar in Lux, in another particularly strong scene, where the two brothers finally air out their longstanding grievances with one another. Eventually however, Maze intervenes and breaks the two up, when she says that she’s been a pawn of both of them, and they can kill each other for all she cares. 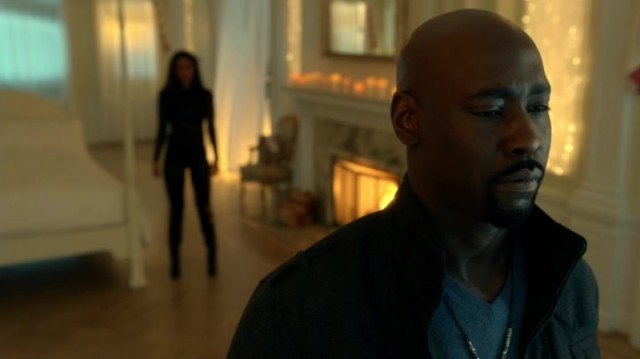 Lucifer continues to be driven to drink after this, though when Chloe arrives to inquire about why Lucifer’s name is all over a crime scene, she notices that the harassing street preacher is lying dead beside the bar. As LAPD officers roll in, the episode ends with Chloe having to pull her gun on Lucifer, tearfully declaring that she’s placing him under arrest. It was a great heartbreaking character moment for Chloe, who very recently admitted that she’s become truly attached to Lucifer, just as it was also a fantastic cliffhanger for next week’s season finale, especially since it seems pretty doubtful that Lucifer will stay behind bars. He has yet to exact vengeance on Malcolm, after all.

Currently, the only character still kind of lagging behind from a narrative standpoint this episode is Dan, who is still inexplicably acting like the fake break-up text indeed came from him, which is pointless and annoying, since he could easily resolve that situation by simply explaining it. Dan even seems largely alright with being Malcolm’s partner now, and mostly just took up space in this week’s episode. Maybe he’ll have a better role next week, given that he can play off of where Lucifer, Chloe and Malcolm all stand now, but he was the one small ding against an otherwise excellent episode this week.

“#TeamLucifer” continues to have Lucifer moving toward what’s hopefully a standout season finale next week. Once again, the show has hit a new high point, after, “St. Lucifer” also turned out very well last week, and now seems to be fully finding its groove. This episode did virtually everything right, beyond some of the annoyances with Dan, and the procedural and supernatural formats were both exceptionally executed this week. Both the questions and answers were realized to sublime effect in this latest episode, and even as things appear to come to a violent and furious head with the implications of Lucifer moving to Los Angeles, it’s still easy to get excited for what the last episode of Season One still has yet to bring to the table.

Lucifer 1.12: "#TeamLucifer" Review
Lucifer approaches its season finale on an excellent note this week, as The Devil hits a breaking point, and Chloe is forced into a heartbreaking corner.
THE GOOD STUFF
THE NOT-SO-GOOD STUFF
2016-04-19
92%Overall Score
Reader Rating: (1 Vote)
98%