Better Call Saul has reached the end of its second season, which seemed like it would boast a very exciting season finale, after Chuck suffers a potentially dangerous injury in the copy store, upon pursuing his vendetta against Jimmy there. The season finale this week certainly wasn’t a perfect one, as it did suffer from a sense of being somewhat anti-climactic, and from leaving the ongoing Mike storyline dangling on a really odd note, but the episode was still mostly great, especially in how the growing animosity between Jimmy and Chuck really seemed to boil over for at least one side.

After a brief moment to consider his actions, Jimmy rushes into the copy shop and arranges an ambulance for Chuck, which forces Chuck to go through more lights and electricity as he’s poked and prodded at. Chuck insists that he doesn’t want to be treated, saying that he can’t handle the electricity, though eventually, it comes out that he’s just fine regardless. Beyond a small head laceration, Chuck will seemingly be alright, though the doctor also once again brings up the very real possibility that Chuck is mentally ill, and needs to be committed.

Seeing Jimmy vouch for Chuck so much is kind of surprising, with Jimmy even refusing to leave his brother’s side for most of the episode. Perhaps it’s a sense of guilt from Jimmy believing that he’s indirectly responsible for Chuck being there in the first place, but it really went to show that, despite their differences, Jimmy loves his brother, and doesn’t want his brother to be hurt or in danger, especially not on his account. For the first time in a while, Jimmy put away his bag of tricks, and simply focused on doing what was necessary to preserve his brother’s well-being, and that was a great reminder that, for all of his dishonesty and bending of the rules, Jimmy is still the hero of this story.

Things really changed for Chuck though, who more or less completely stopped hiding his growing hatred of his brother. Calling Jimmy out immediately, Chuck is talked down by Ernesto, who claims that he called Jimmy to the scene, and that’s why he got there so fast (which is a lie), with even Ernesto later pointing out to Jimmy that he thinks Chuck has gone off the deep end, and that he can’t support a vendetta against Jimmy. Chuck really does seem to be coming apart at the seams now, even sealing himself in his house to make an even thicker wall of electromagnetic protection.

The other big development in this season finale was that Chuck quits Hamlin, Hamlin & McGill, pretty much leaving Howard up a creek. Howard even believes that Jimmy is to blame at first, though Jimmy had no idea that Chuck was quitting. After Jimmy confronts Chuck about his, “Retirement”, he decides to fess up to his felonious act of forging legal documents, thinking that it will save his brother from his downward spiral, and motivate him to take up his station at HHM again. Chuck points out that Jimmy could go to jail for what he’s done, but Jimmy seems unbothered, since it’s not worth taking his brother down with him. As the episode ends however, it’s revealed that Chuck recorded every word that Jimmy said, pretty much creating decisive evidence with which to destroy his sibling in Season Three next year.

This pretty much cements that Chuck is the greater evil in contrast to his brother, going to seemingly any lengths to bring Jimmy down, no matter what the cost. This stands in stark contrast to Jimmy’s devout, selfless desire to save his brother, even if it means sacrificing his career and reputation in the process. Perhaps Chuck is legally in the right, but it does seem apparent that he’s mentally spiraling, and has become consumed with hatred of his brother, to the point where Chuck no longer cares who he hurts. In a way, Chuck has become what he thinks Jimmy is, and that could be a key part of what ultimately motivates Jimmy to abandon the noble path and become Saul Goodman.

As much as this was all very interesting though, the rest of the episode kind of lagged behind the main Jimmy/Chuck narrative, which held up the entire season finale by itself. Kim was unfortunately pushed entirely into the background for this finale, which was disappointing, and Mike’s storyline felt like it ultimately fizzled out before it got truly interesting. Mike preparing to assassinate Hector Salamanca can only be considered so big a deal, since we know that Salamanca is alive, if not well, during the events of Breaking Bad, but even then, the storyline just feels like filler, and that’s a real bummer for the final episode of Season Two.

The only resolution we get with Mike’s storyline is the insane amount of preparation that he undertakes to assassinate Hector, which feels moot, since, like I said, Hector obviously survives, given his role on Breaking Bad. Some of these scenes are cool, but they don’t particularly go anywhere. Even seeing Nacho surprisingly stand in front of Hector and block Mike’s shot, only to later get his attention by setting off the horn of Mike’s car and putting a note on the windshield that says, “Don’t”, doesn’t really matter, because Hector obviously doesn’t die here. This weird ending for Mike’s storyline also felt too abrupt and unsatisfying. This season in general hasn’t been able to effectively tie Mike in with Jimmy’s story arcs, and it felt like the writers just ran out of room for Mike before they could properly wrap up his season arc here, which is unfortunate. 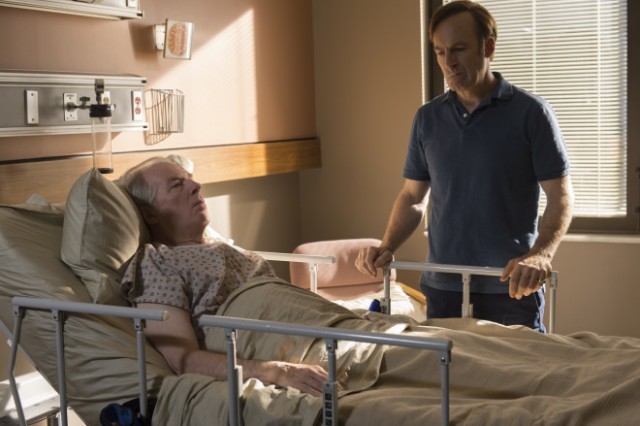 It’s never fun when a season finale turns out to be a bit weak, but that’s unfortunately the case with, “Klick.” This show is still mostly fantastic, and this episode still stands in a class above most other television shows, but there’s no denying that this season finale is nonetheless anti-climactic and disappointing. The Jimmy/Chuck material was great as ever, but every other element of the episode felt a bit half-baked and faulty. Chuck having the weapon he needs to take down Jimmy immediately sets up some great promise for Season Three, but hopefully next year, Mike especially finds a few better things to do than chase an outcome that fans already know won’t come to pass.