NOTE: Full spoilers for this episode of “Agents of S.H.I.E.L.D.”, including a major character death, are present in this review

After the conclusion of last week’s episode, Agents of S.H.I.E.L.D. appeared to be going all out with the Secret Warriors hook that Marvel and ABC have been teasing since before Season Three started at long last! This week’s episode, “The Team”, had the powerful squad of Inhumans liberating the captured S.H.I.E.L.D. agents from a HYDRA stronghold, making for one of the coolest episode openings that this show has sported in quite a while!

In fact, the mission goes so flawlessly, that not only is everyone recovered without any casualties, but the team even manages to apprehend Malick, who is ripe for interrogation by Coulson. It creates a high of excitement and confidence for the episode, which leads into an especially shocking and dramatic conclusion later. Obviously, the high point of the Secret Warriors’ first proper run wasn’t going to last forever, but as awesome as the episode’s final moments were, especially since they extensively alter the dynamic of the show as it approaches this season’s final handful of episodes, it also seemingly comes at the expense of the season’s big hook.

Agents of S.H.I.E.L.D. has had a very good third season, and one that has kept the show strong since it started to build itself around the introduction of the Inhumans to the Marvel Cinematic Universe last season. Unfortunately though, if there is one very noticeable weakness to this season, it’s the fact that the show has taken far too long to push the Secret Warriors concept, since this season just had too many other storylines going on already, especially with the need to push Bobbi and Hunter off of this series so they can star in their own spin-off show next season. This was felt in this episode, since after just one mission, the team is already being split up.

This does at least lead into a good turn of Malick revealing the true nature and abilities of Hive to Coulson however, as Malick reveals that Hive can control Inhumans, and if Coulson has a whole team of Inhumans that has recently been put together, he should be very worried. Fitz and Simmons soon after discover evidence of an infection in the body of Lucio, the Inhuman with the petrifying eyes that ends up being accidentally killed by Joey during the rescue, making it appear that Malick is telling the truth. Since Coulson can’t leave his team open to a potential threat, he puts the base on lockdown, and forces the Secret Warriors, including Daisy and Lincoln, into containment. 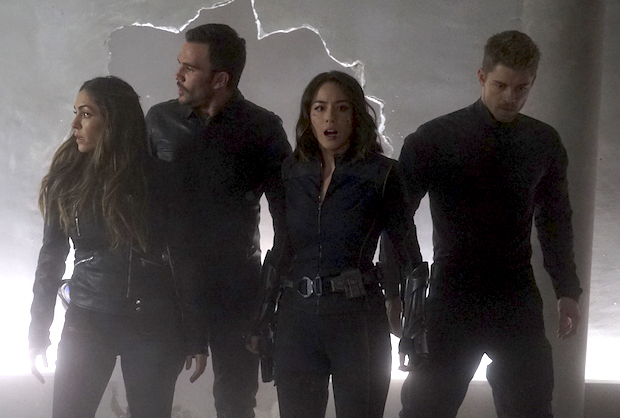 This nicely played up how delicate a team that the Secret Warriors actually are in their early stages, despite their first mission being so enormously successful. Things get complicated further when Malick is found dead as well, and a grenade has obscured the cause of death. One of the Inhumans is guilty, if not more than one, and this quickly has them arguing and wanting to leave. This was a solid callback to The Avengers, where the titular super team had its own growing pains and distrust of one another before learning to come together, and hell, this was even the case in Guardians of the Galaxy to a fair extent, though that movie didn’t involve Coulson in the mix, unlike The Avengers. Even considering the circumstances of how the title teams came together in those movies however, the Secret Warriors have things even rougher, since they actively know that one of them can’t be trusted. There’s no glowy blue Mind Stone eyes to let everyone know that someone has turned this time!

Eventually, after doing some digging, Coulson finds evidence that Lincoln is the traitor, and Daisy leads the Secret Warriors into a containment area, convincing them that it’s an escape route, so that Lincoln can be captured. It is true that Lincoln was briefly exposed to Hive, and this seems to check out, though the damage has been done. Daisy has been put in the difficult position of having to lock up her boyfriend, and both Joey and Elena, the other two Secret Warriors fighters, have decided that they now want nothing to do with S.H.I.E.L.D. Again, it’s frustrating that the Secret Warriors are already falling apart, but at least this continues to build Hive as a dangerous new antagonist, and a full evolution of an especially dangerous Inhuman-controlled HYDRA, now that Malick is dead.

Lincoln’s apparent betrayal also hurts the foundations of S.H.I.E.L.D. itself, but still, even in imprisonment, he claims to be innocent. Trusting S.H.I.E.L.D. to get their answers, Lincoln is soon after visited by Daisy, who volunteers to spring him and run off. Lincoln becomes suspicious, since the Daisy he knows would never betray S.H.I.E.L.D., and soon, he realizes the horrible truth; The evidence was planted by Daisy, who is the real Inhuman that Hive turned. Daisy has been a sleeper agent of Hive since encountering him during “Spacetime” a couple of weeks ago (the twist of her being the one killing Malick in his vision was great, and still lines up with Malick seeing Hive as the cause), and she is now putting a plan into action, namely by stealing the ancient Kree artifact that Lincoln found, along with a whole lot of Terrigen Crystals, before crippling the S.H.I.E.L.D. base with a dangerous earthquake. By the time Coulson realizes what’s going on, he ends up locked out and buried under rubble, as Daisy leaves the team without transport, and a means to pursue her further. Damn…

This was a very heartbreaking story turn, and one that exceptionally leads into the final batch of episodes for Season Three. It was also clever to have all of this taking place when S.H.I.E.L.D. really seemed to be on a hot streak, having captured Malick, and successfully broken in the Secret Warriors. Even Fitz and Simmons now finally seem to be fully embracing their romance, with Simmons finally letting herself have a few smooches with Fitz, before the Daisy-induced earthquake interrupts them, making this story element feel a bit tossed in and overlooked. As is usual for this show, happiness can’t last when the next threat is still around the corner. With Hive stealing one of the team’s best agents, and neutralizing the Secret Warriors in one fell swoop, even Malick seems to have been thoroughly dwarfed as a threat, with the rise of a new, super-powered HYDRA in his wake.

“The Team” was a good episode that upended the show in a very inspired way, especially with Daisy foreseeing the demise of either herself or someone else on the team that follows these events, after coming into contact with that death-seeing Inhuman a couple of weeks back. The rest of the season looks to be exploring that vision coming to pass, and by the end, it looks as though not everyone in the current S.H.I.E.L.D. roster is going to survive to Season Four. It’s really frustrating to already have the Secret Warriors falling apart, and they really should have been a bigger part of this season, but hey, assuming that the now-Hive-controlled Daisy will eventually live to fight another day, maybe we can look forward to a bigger and better squad to replace any fallen or departed comrades next season.