Brooklyn Nine-Nine’s season finale led the standout Season Three to a strong conclusion this week, as Bob Anderson holds Captain Holt hostage, and the rest of the precinct has to figure out how to save the day. This led to a very strong batch of effective jokes, and yet another strong play by the detectives, leading to a healthy feeling of fun and camaraderie to close out the season with!

Immediately, the episode started strong, as Peralta, Diaz, Scully and Hitchcock must literally follow the trail to the captured Holt in the hospital, after he smears the “H” letters in hospital signs with chocolate. Jeffords and Gina also race to the scene meanwhile, with everyone closing in on Anderson as he prepares to drop Holt off of the roof in what would appear to be a freak, “Bird-watching accident.” That seems about right for the criminals on this sitcom.

Fortunately, Jeffords manages to take down Anderson before Holt is killed, and the next order of business is trying to locate the evidence on Figgis, which will be necessary to bring Pimento back. Anderson, of course, isn’t talking, and to make matters worse, Figgis sends a group of goons to kill the detectives before they can take Anderson away. A crime boss sending a big wave of bad guys into a hospital to kill a bunch of cops is pretty damn unrealistic, but I suppose it gets a pass, since Brooklyn Nine-Nine has been parting ways with realism more than ever this season, and it hasn’t seemed to hold the show back.

Left with no options, Diaz suggests taking Anderson to her apartment, since nobody knows where she lives. This is a great way to reference Diaz’s hyper-incognito lifestyle that has been referenced numerous times throughout this series, and it was especially funny to have her reveal that she had Santiago at her place once, but moved away the very next day. It really is the perfect hideaway, and the laughs kept coming as viewers learn that Diaz is living under a fake name, owns a well-decorated and civil-looking apartment, and is seen as an upbeat, very chatty tenant by the building’s inhabitants. Most hilarious was Diaz suggesting that she doesn’t even use her real name at the Nine-Nine, which seems all too fitting for the exaggerated mystery constantly surrounding her character.

In any case, what follows next is a very funny montage of the detectives taking turns trying to get Anderson to reveal where he hid the evidence on Figgis. Each of them uses increasingly ill-advised and ineffective torture tactics, and Gina proved to be a standout in terms of laughs, since she just tells the story of her annoying cousin, and doesn’t even try to squeeze information out of the precinct’s captive. Naturally, they all fail, and when it looks like Figgis’ men have cornered everyone, they’re forced to take refuge in the predictable panic room that Diaz has set up, while Peralta and Diaz fish out the file that Anderson finally reveals the location of, after it becomes apparent that Figgis’ men are going to kill him. 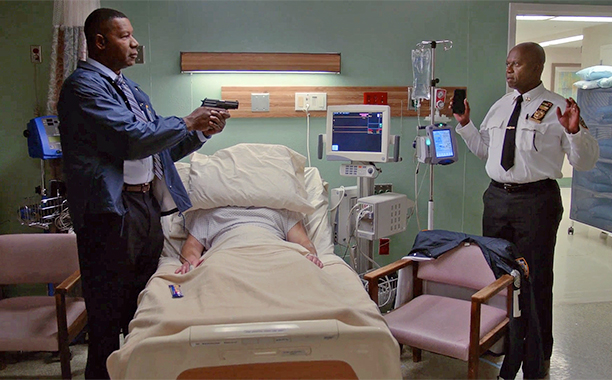 While this is going on, Santiago and Boyle are frantically trying to fly back to New York, which was also a very funny subplot. Santiago exploiting her fake pregnancy to get on a plane is already pretty funny, but the subsequent arc of the two being stuck on a plane, and Santiago spiraling because she can’t do anything to save Peralta or Holt, nicely exploited some hilarious giggles from the apparent fact that Santiago and Boyle had to sit out the action throughout most of the season finale. Boyle trying to distract Santiago with a viewing of one of his favourite movies, 27 Dresses, as well as frequent helpings of sundaes, also provided some solid laughs, continuing to prove that there’s no comfort quite like Boyle comfort.

Things wrap up with a surprisingly great twist too, as it’s revealed that Figgis never found Diaz’s apartment, and Boyle and Santiago had actually arrived quite a bit beforehand, faking the attack so that Anderson would give up the Figgis file. This was an excellent way to cap off the episode’s climax, and had Figgis’ operation decimated, while Anderson went to jail. Things look highly victorious for the precinct, especially after Santiago asks Peralta to move in with her, though it doesn’t last. Figgis himself makes a voice-masked phone call to Peralta in the final scene, threatening to kill both him and Holt for ruining his crime ring. Thus, Peralta and Holt have to enter witness protection, taking up the identities of, “Greg and Larry”, friendly neighbours in Florida, as the episode ends. If this sounds abrupt, it kind of is. The only slight knock against this otherwise awesome season finale for Brooklyn Nine-Nine is that the ending feels very rushed, and tries to shoehorn in a big hook for next season in a handful of seconds. To the show’s credit, it uses those seconds well, but there’s also a lot of questions left to linger by the hasty wrap-up, especially Santiago wanting Peralta to move in with her.

Still, it’s great that Brooklyn Nine-Nine finished its superb third season on such a strong and funny note. “Greg and Larry” offered a strong batch of fun and laughs, and even if it had to cram in a pretty major plot twist in the ending seconds of the episode, the story still made for an especially satisfying adventure for the Nine-Nine. With Peralta and Holt now banished to witness protection, one has to wonder how the Nine-Nine will carry on in the meantime, and who exactly will replace their presence all the while, but I suppose that these are all reasons to look forward to the confirmed fourth season later this year. I have a feeling that even the idea of Peralta and Holt being neighbours will lend itself to some pretty amusing antics later though!