NOTE: Spoilers from throughout the second season of “iZombie” are present in this review

iZombie was a fun and fascinating surprise hit when it first started airing on The CW last year, or streaming service, Shomi for us Canadians, and its big dark horse success cemented it for a second season pretty early. While said second season had to wrap a bit early this year, due to The CW’s big pandemic event series, Containment starting its run in its timeslot during April, iZombie lost none of its momentum during Season Two, with this show being as fresh, fun and creative as it ever was, even while continuing to deviate wildly from the Vertigo graphic novel series that inspired it.

Season Two attempted quite a lot of ambitious story turns for iZombie, and it realizes most of them with aplomb. With Blaine’s Meat Cute business undone at the end of Season One, and Liv curing him and rendering him a normal, everyday human again, Blaine’s forced to revise his business plans, though he doesn’t lose a step at all, now running a funeral home under the alias of, “John Deaux”, while still funneling brains to Seattle’s growing zombie population. Season Two cleverly explored the necessity of Blaine, despite his dirty dealings, and even introduced his father, Angus, played in a standout guest turn by Robert Knepper, which further highlighted how and why Blaine came to be, and why Blaine is often a necessary evil for the city.

The end of the season proved to be especially shocking for Blaine’s complex and appealing character, as he begins a romantic relationship with Peyton after a botched zombie cure makes him lose his memory, which seems short-lived when Peyton realizes the truth about Blaine’s past, until Blaine rescues her at the end of the season, seemingly snatching her away from Ravi, who had his own batch of romantic woes this season. This all came to light by the introduction of another appealing villain for the show, Stacey Boss, played by Eddie Jemison. While he’s a holdover villain that still ends the season at large and dangerous, and seems to be being saved as an ongoing threat for Season Three later this year, Jemison made Boss a memorable and surprisingly intimidating presence, despite his cuddly and comical exterior. Boss even successfully killed Blaine at one point in the season, who was luckily saved by the zombie cure wearing off right as he had his throat slit! Talk about lucky!

The real big bads of Season Two, beyond Blaine, Angus and Mr. Boss however, were Max Rager, who were worthy foes that led to lots of great storylines throughout the season, while also increasing the scale of the show’s threats. Max Rager seemed to have eyes everywhere, and had a big influence on pretty much all of the show’s lead characters. Whether it was the corporation’s boss, Vaughn du Clark sending his daughter, Rita to pose as Liv’s new roommate, “Gilda”, while simultaneously having an affair with Major, or Major using his new cure-induced zombie-sensing abilities to appear to kill zombies for Max Rager, who wants to cover their tracks after the zombie outbreak, every story turn related to Max Rager was fun and thrilling. That’s why it’s kind of sad that both Vaughn and Rita were killed during the season finale, and Max Rager was largely left in ruins, with its remains overtaken by a zombie-filled PMC company. It was a satisfying and grisly end for Vaughn especially, but both Vaughn and Rita will be missed for their effectively sinister, backstabbing presences.

Speaking of that two-episode season finale, it beautifully tied together the many strong elements from throughout Season Two. The finale’s second episode in particular offered a surprisingly thrilling and action-packed final battle in Max Rager during a launch party for Vaughn’s new weaponized energy drink, Super Max, which led to a bloody and unpredictable escape effort by Liv, Major and Babineaux. Oh, and speaking of Babineaux, he finally learned the truth about Liv and zombies at the end of this season, and he’s pretty much thrown to the sharks, having to immediately fend off an army of rabid zombies in the Max Rager building right at the season’s end. Given that the knowledge ends up costing Babineaux his career prospects, girlfriend and reputation, it will be very interesting to see how this character continues to process the zombie situation in Season Three.

Of course, considering that this is iZombie, there were naturally plenty of brains to go around across various murder cases for Liv to solve as well. Most of the brains were pretty fun, namely the old man brain from, “Grumpy Old Liv”, the vapid trophy wife brain from, “Real Dead Housewife of Seattle”, and the stripper brain from, “Pour Some Sugar, Zombie”, among other highlights. Almost every case this season also continued to be a delight, being both fun and unpredictable, though there were a couple of weak episodes too, which Season One never seemed to stumble over. “Zombie Bro” was a bit of a dud, relying on tired frat boy stereotypes to push along a weaker case, while, “Method Head” didn’t prove to be very exciting, despite some decent meta humour. 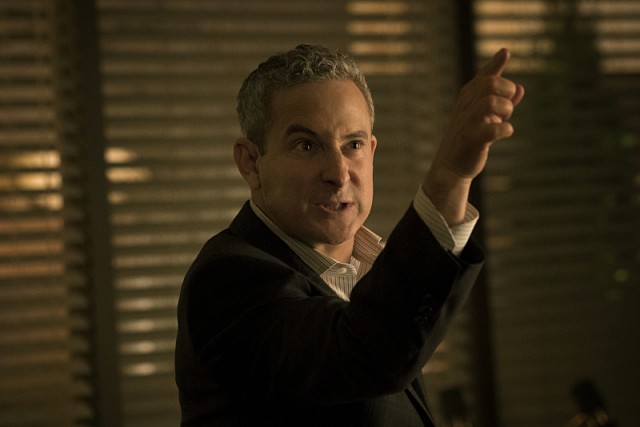 Of course, the humour remained in full force throughout Season Two, but the drama also became especially powerful this season. Liv’s family ended up being pushed into the background right at the start of the season, and were pretty much never seen again after that, but that’s fine, since they were one of the show’s only weaknesses during Season One. The big relationship developments for Liv, Major, Ravi, Peyton, Blaine and Babineaux alike were all very strong, especially with the questions surrounding Drake, Liv’s zombie beau, who is revealed to be a henchman for Stacey Boss, before subsequently being revealed as an undercover cop. Liv’s relationship with Drake made for a great way to explore how lonely and cold Liv has gotten, especially after another failed relationship attempt with Major earlier in the season, and Drake becoming a full, rabid zombie that Liv has to kill in order to save Babineaux’s life in the season finale, was effectively tragic.

There were a lot of strengths in Season Two of iZombie, and the show seems to be going stronger than ever by the end of its second season. There’s still very little to gripe about, since this show remains a fun and creative take on both case-of-the-week procedurals and comic book dramas. The dramatic chops of the show excelled quite a lot this season as well, while still not coming at the expense of the comedy and charm that iZombie has been great at since day one. The new mysteries and cases continue to intrigue, and even with Max Rager now dead and gone, or at least Vaughn’s version of it, there’s plenty of directions for the show to go, now that Stacey Boss is still at large, Blaine has lost his memory, and some zombified PMC’s are moving in to Seattle with the apparent intention of wiping out humanity. Liv’s going to have her hands full more than ever in Season Three, but that’s great, since this show has lost none of its magic after a second season. The fact that Babineaux is finally in the loop should help things along too!