After its latest week off last week, The Big Bang Theory returns with a rather interesting use of the character dynamic among the leads. When a disagreement between Leonard and Sheldon spins out of control, it causes a snowball effect that ends up splitting the entire group, bringing emotions to a boiling point over recent developments in the season, and the series as a whole.

All of this was conveniently themed around the season premiere of Game of Thrones, which airs in the real world this Sunday. As much as some of the Game of Thrones jokes were very funny though, the in-show advertising for another product that’s under Warner Bros.’ corporate umbrella within The Big Bang Theory is pretty heavy-handed here, especially when the episode had pop-up ads further advertising the Game of Thrones premiere, at least in Canada’s CTV airing. We get it, Warner Bros.! Game of Thrones is back soon! The funny jokes help to distract from the intrusive advertising, but I’ve got to say that Warner Bros. exploiting their sitcom’s record-breaking viewership to plug their other products, like the blatant Suicide Squad plug throughout, “The Solder Excursion Diversion” recently, is getting pretty tacky, and they really need to dial it way back sometimes. 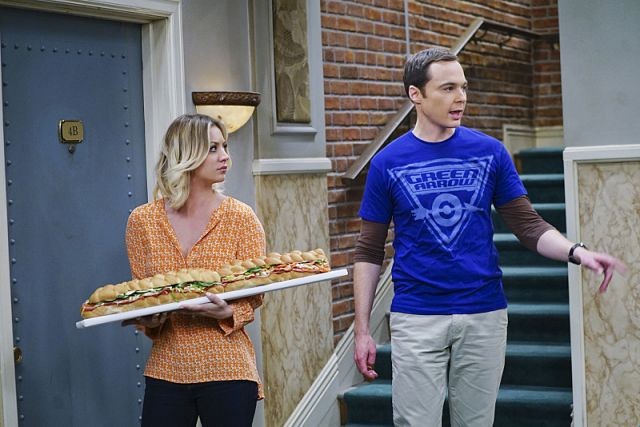 More problematic however are the spoilers for key events in Game of Thrones that the episode occasionally drops. Again, while some of these do tie into some solid laughs, they’re very inconsiderate to people who are interested in watching Game of Thrones, and haven’t yet found the time to catch up on the series. Sure, key events in movies, television shows and video games are sometimes brought up in various episodes of The Big Bang Theory, but usually, the show tries to avoid giving away key story developments for newer entertainment products that aren’t catalogued deep in the public consciousness yet. It’s no big deal if you are caught up on Game of Thrones, and I certainly am, but this episode really should have been more careful with its humour at times, and not just assumed that everyone watching it is up to date on HBO’s fantasy epic, which is rather arrogant, honestly. That’s before considering that these current trend plugs instantly date The Big Bang Theory for legacy views when they get out of control too.

With all of those tangents about questionable taste on the part of Warner Bros. and Time Warner aside though, “The Viewing Party Combustion” was still a good episode with a strong hook. Leonard and Sheldon have really gone at each other’s throats before, but given the maturation that both characters have enjoyed recently, it’s been a while since they’ve really had an enormous fight like this. The fact that everyone gets pulled into the disagreement is also very effective, especially when it brings up surprising, yet true revelations about the leads’ dynamics, even nine years later.

Did you notice just how much Penny sticks up for Sheldon and takes his side? Amy noticed it, and that motivates her to side with Leonard when things get nasty, since she doesn’t like Sheldon and Penny’s weird, mother/son-like connection. Likewise, when Raj finally just goes ahead with dating both Emily and Claire at the same time (the reveal that he’s dating Claire kind of came out of nowhere this week, but the clues were somewhat laid out beforehand), it’s predictable that he gets real pompous about it, which quickly annoys Howard. It’s easy to infer that Howard’s married life and future child are making him yearn for the bachelor lifestyle again a bit, and maybe the show will start exploring this in Season Ten when Howard no doubt actually becomes a father, but the clash between Howard and Raj carried just as much effective emotional weight as the battle between Leonard and Sheldon, and thereafter Penny and Amy.

Even Stuart ended up caught in the scuffle, hilariously dressed in a Jon Snow outfit when Howard pranks him into thinking that the Game of Thrones viewing party at Leonard’s and Sheldon’s place is a dress-up party. When the two sides split into separate apartments, the point when Stuart asks which party is the one he should go to if he’s mad at Howard was especially hilarious. In fact, given that angle with Howard’s mischief, it’s disappointing that Bernadette sat out most of the episode, appearing briefly in a couple of scenes, and not really having any bearing on the rest of the plot. When the episode’s lone story incorporates every character in some way, Bernadette’s absence is pretty conspicuous, and given how opinionated she can be, not having her take part in a heated emotional blowup is a pretty big missed opportunity for jokes, especially when she’s pregnant and hormonal.

The episode hits something of a climax after a party sub happens to contain pistachio nuts, which gives Howard an allergic reaction, and forces him to be rushed to the hospital. Obviously, Howard is fine, but this was a good way to bring everyone together again and help them see past their issues. Besides, the ending jokes were very amusing, as the guys mock Stuart when he attempts to bike home in his Jon Snow outfit, and Sheldon does a very inspired callback to the very beginning of the episode in the epilogue, where he asks a sleeping Leonard and Penny a question about Batman and Man-Bat that was never answered for him when the conversation is steered away by Raj dating two women. It’s good that the episode mined better laughs than drama from the big group argument, especially since the imminently approaching season finale would probably be a better place to start exploring big story conflicts. 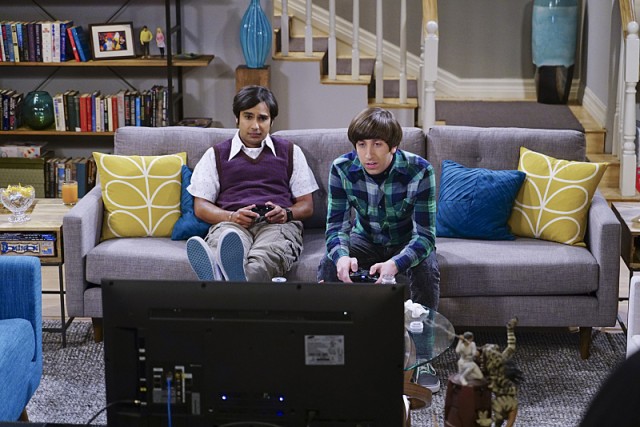 “The Viewing Party Combustion” was very funny, and had a satisfying emotional boil that ended up going somewhere heartwarming and fulfilling. It’s irksome that The Big Bang Theory is starting to go too far with the in-show advertising however, which is distracting and annoying in an otherwise strong episode, especially when it means spoiling a couple of big story turns from the very show that you’re extensively advertising in your episode. I get that The Big Bang Theory is a geek-themed sitcom, and that’s an ideal place to bring up pop culture favourites like Game of Thrones, but there’s a point where it gets excessive and intrusive for viewers, especially when the episode is so obviously timed with Game of Thrones’ season premiere on Sunday. If you’re a Game of Thrones fan with a sense of humour, you’ll certainly get a kick out of this week’s offering, but if not, the episode becomes noticeably less entertaining in several respects, and that’s a bummer.

The Big Bang Theory 9.21: "The Viewing Party Combustion" Review
The Big Bang Theory delivered a funny and emotionally satisfying Game of Thrones-themed episode this week, even if the advertising and spoilers are pretty tacky.
THE GOOD STUFF
THE NOT-SO-GOOD STUFF
2016-04-21
83%Overall Score
Reader Rating: (0 Votes)
0%