Last week’s especially strong episode of Legends of Tomorrow ended with the team facing an especially clever and deadly opponent; An assassin in service to the Time Masters that goes into the past and targets the team’s younger selves, killing them in the present and effectively erasing them from existence. “Last Refuge” has a great hook to spring from this week, and provides some particularly fantastic character insight as the team surprisingly casually interacts with their past selves, even if it doesn’t quite match the high point of last week.

When the team’s newest foe, “The Pilgrim” travels back to Central City, 1990, targeting a teenage Mick Rory as he watches his house burn down with his family in it (I thought that this may be Ray at first, but apparently it’s Mick, with the burning house being kind of a giveaway, and a nice nod to Heat Wave’s origin from DC Comics lore), Ray intervenes at the last second, and manages to hide the young Mick on the Waverider. A similar attempt is thwarted on a teenage Sara Lance as well, only a short while before she boards the Queen’s Gambit for her life’s turning point on Arrow, though the adult Sara, with some help from Mick, manages to similarly rescue her, drive off The Pilgrim, and drop her on the Waverider. 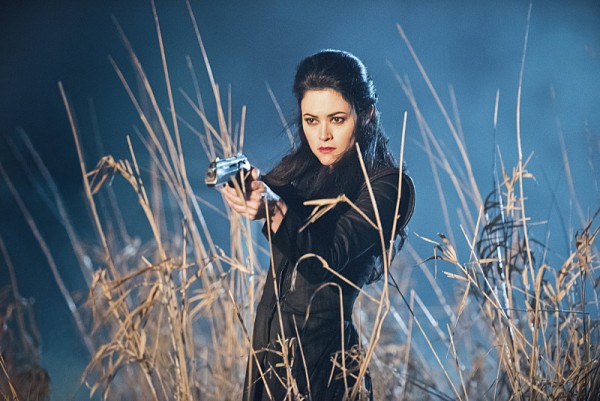 On the one hand, the episode does effectively address the obvious question of why The Pilgrim doesn’t just travel back one week or so in the past to kill the team’s past selves when the first attempt fails, with Rip justifying it by saying that too many time jumps through someone’s personal timeline will cause too much damage to history, meaning The Pilgrim gets only one shot at each team member. The Pilgrim is also unable to target Kendra, since her ability to reincarnate means that she can’t be erased from history, and I assume that Kendra’s original Egyptian self also can’t be targeted, since it would change too much of history from removing her and Carter’s constant reincarnations. Anyway, this explanation makes enough sense to get a pass. On the other hand though, the show already seems to be throwing out the formerly strict rule of Rip to never interact with one’s past self. Yes, Martin had a small interaction with his former self earlier in the season, and even knocked his younger self out at one point, but the show sort of gets around it by having the younger Martin not put together that he’s seen himself from the future.

This could even be justifiable with Mick here, given their large age difference, but with Sara, it’s a gaping plot discrepancy. The younger Sara seemingly fails to notice that the older Sara looks and sounds not just similar to her, but exactly like her! Going by Sara’s former tombstone on Arrow, she’s about 28 or 29 when she joins Rip’s team at the start of the series, and if you account for Sara aging just over an extra two years during the events of “Left Behind” a few weeks ago, she would presently be about 31. In almost all cases, your face structure and other elements of your appearance are almost exactly the same between 19 and 31, so how is the teenage Sara not immediately realizing that her captor is identical to her in every way?! Not similar, identical! 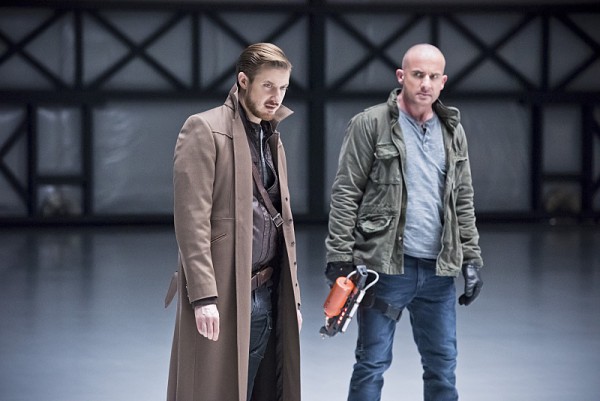 To be fair though, the show ‘suspending’ the rule of interacting with one’s past self at least leads to many great scenes. Mick trying to coach his younger self into avoiding some of his stupider mistakes, and coming to terms with him accidentally killing his whole family, is among the most heartfelt that his character has been to date. Likewise, Jefferson getting a chance to meet his birth father, shortly before he’s killed on a military tour mere weeks after Jefferson’s birth, is similarly touching and effective, especially when he gets a chance to tip his father off to how he dies, presenting a small chance that he can change history, just like Mick.

Paul Blackthorne even guest stars in this episode as a slightly younger Quentin Lance, who is eventually taken hostage by The Pilgrim as a trump card, along with several other loved ones of the team, including Lisa Snart (who you don’t actually see), Clarissa Stein, Ray’s late fiancee, Anna (revealed for the first time to have the surname, “Loring”, suggesting a connection to Atom’s DC Comics wife, Jean Loring, despite a different Jean Loring appearing as the Queen family attorney on Arrow), and of course, Jefferson’s father. Sara remedies the memory of Lance’s kidnapping with a convenient amnesia pill afterward as well, which offers a half-hearted excuse for why Lance doesn’t ever bring up his time on the Waverider during the events of Arrow. 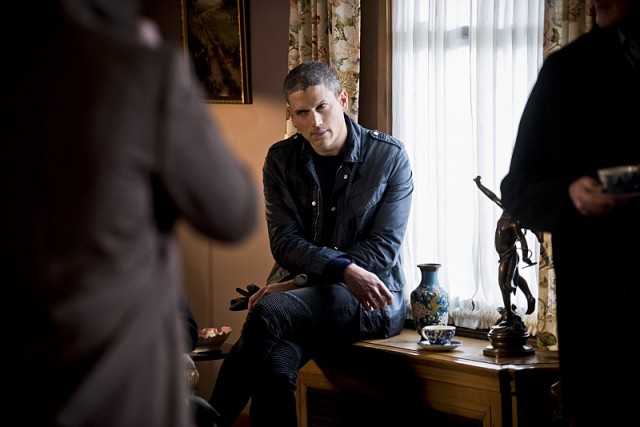 The best storyline however offered insight into Rip’s childhood, which is revealed for the first time. Taken in by a Time Master-sanctioned orphanage at a hidden point in history (explaining why the team can dump their past selves there temporarily and keep them safe), Rip began life as a homeless orphan boy named Michael, who was stealing whatever he could to survive. Eventually, Michael is taken in by the orphanage’s owner, whom Rip refers to as his spiritual mother, who sets him right, and on the path to becoming a Time Master. On this note, the twist of Rip offering his younger self to The Pilgrim to be killed, which would prevent Rip’s team from ever forming and effectively erase the events of the show from history, was very cool, even if it did already forget about Rip claiming that he can’t offer himself, because erasing a Time Master would damage history far too much. Regardless, as the time-manipulating Pilgrim appears to stop all of the Legends in their tracks as they’re about to attack upon the hand-off of the child Rip, the child Rip stabs her in the leg, leading to the blasts of Rip, Firestorm, Leonard and Mick turning her to ash. Rip trusting himself to be violent and unstable strangely saved the day, and it was a neat twist overall.

That said though, the episode had some noticeable flaws in several places. Yet again, the Kendra/Ray romance is a chore, since Kendra is going back to worrying about what her past self said during last week’s episode, and whether she can truly have a future with Ray. When Ray nearly dies from The Pilgrim attacking his past (adult) self in 2014 however (conveniently allowing Rip to shoot an Atom Suit gauntlet to drive off The Pilgrim), Ray proposes to Kendra, who accepts, then doubts it, then decides not to doubt it. This flip-flopping continues to be tedious, and the show needs to pick a stance for the relationship between these two and stick with it. Likewise, despite a cool idea behind her character, The Pilgrim was similarly a waste, ultimately being little more than a shallow baddie that was killed off in the episode’s climax. Frankly, almost any character could have occupied her part, and the change would have been non-existent. 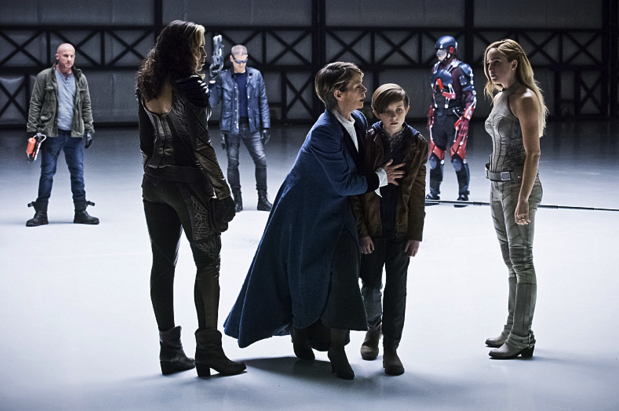 Like last week, Legends of Tomorrow continues to do well when it puts Vandal Savage on the sidelines, and simply focuses on telling good, clever stories with its lead crew. Perhaps it speaks to the fact that Savage isn’t ultimately able to anchor this series as a big bad at this point, despite the ending tease of going after Savage when he conquers the world in Rip’s future next week, but regardless, this character-driven episode was entertaining, despite some plot holes and story issues. The episode did a mostly good job of explaining away some of the obvious questions of The Pilgrim’s time-bending attack on the team’s past selves, but it didn’t cover every single one of its bases unfortunately, and I’m definitely not about to believe that a pre-Canary Sara Lance is so vapid and dumb that she doesn’t even recognize herself!

Legends of Tomorrow 1.12: "Last Refuge" Review
Legends of Tomorrow presented a very clever hook as the team's past selves are attacked this week, though the many great character moments are dragged down by plot holes and a shallow villain.
THE GOOD STUFF
THE NOT-SO-GOOD STUFF
2016-04-22
75%Overall Score
Reader Rating: (0 Votes)
0%