With hype for the imminently-premiering sixth season of HBO’s Game of Thrones at a fever pitch right now, speculation is still running rampant about just how much longer we’ll have to enjoy the conniving, blood-soaked world of Westeros on television after this year. HBO officially renewed Game of Thrones for a seventh season yesterday, alongside new seasons for sitcoms, Silicon Valley and Veep, though the fantasy epic’s showrunners have hinted that the seventh season, along with negotiations for an eighth and final season that are ongoing at present, will have a shortened length in contrast to the series’ usual ten-episode seasons. 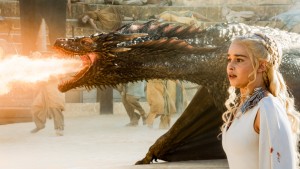 Speaking to The Hollywood Reporter today, Game of Thrones showrunners, David Benioff and D.B. Weiss have confirmed that it now seems to be set in stone that subsequent seasons of the show to follow Season Six will be shortened. Their exact claim states that approximately 10-15 episodes will be left in the series after the conclusion of Season Six this year, which could suggest multiple approaches for Season Seven and a possible Season Eight. Potential combinations for the climax and finale of Game of Thrones could include a normal-sized seventh season and a shortened eighth season, both Season Seven and Season Eight being shortened, or a slightly longer Season Seven simply being split into two, highly separate halves, a strategy adopted by competing network, AMC for the final seasons of beloved shows like Mad Men and Breaking Bad. Whatever the case, this episode count also seems to re-affirm speculation that Game of Thrones will end in 2018.

Originally, Game of Thrones was planned for seven seasons, referencing the series’ love of the number seven (i.e. Seven Kingdoms, Seven Hells, Seven Gods, seven source novels, etc..), and could still cap off at that number, if Season Seven ends up being a final season that’s split in half. Benioff and Weiss confirm that they are currently writing out the series’ final events, with the two always envisioning Game of Thrones as a specific story with a beginning, middle and end, rather than something that just keeps going indefinitely. They also stress to THR that the last thing they want to do is stay on stage after their play is done.

Of course, even with the conclusion of the highly beloved HBO series on the horizon, that doesn’t mean that our time in Westeros necessarily has to end. Author, George R.R. Martin still has two novels left to publish in the seven-novel saga that inspired the HBO series, A Song of Ice and Fire, those being The Winds of Winter and A Dream of Spring, with Martin previously confirming that the books and their finale’s events will differ greatly from the final seasons of the HBO series, even if the end result of both the novels and the show will likely be very similar. Likewise, Telltale Games is at work on a second season to their episodic Game of Thrones adventure game, a video game that shares a universe and canon with the HBO series, which is believed to be planned for a 2017 launch. HBO has even mused about the possibilities of a spin-off/prequel series to Game of Thrones at some point, similar to AMC keeping the legacy of Breaking Bad going strong with current spin-off/prequel series, Better Call Saul, and has also not ruled out a Game of Thrones feature film in theatres, if they can come up with a good idea for one.

Catch the premiere of Game of Thrones’ sixth season on HBO this Sunday, April 24th, at 9:00-10:00 P.M. EST, a timeslot that the season will hold for the next ten weeks.

Keep rallying Eggplante for all major news and updates on Game of Thrones.