NOTE: Full spoilers for this episode of “Lucifer”, including a major character death, are present in this review

Lucifer has gained some considerable traction since its humble beginnings. While its first episodes were rough and unbalanced, the latter half of Season One managed to find a better, more satisfying sense of storytelling, which finally started unearthing the series’ true potential, well beyond the loose connections to the Vertigo graphic novels that inspired it. “Take Me Back to Hell”, this week’s season finale, closed out Season One on a pretty solid note as well, nicely tying up several of the biggest recent story arcs, while also laying some promising groundwork for Season Two, which FOX has wisely given the green light to already.

Most of this season finale was all about the various characters tracking down Malcolm, who seems to have suffered some sort of full-blown psychotic break, first teased with his murder spree and frame job in, “#TeamLucifer” last week. With Amenadiel having to face up to the full consequences of his manipulations, the angel must put his campaign to return Lucifer to Hell aside, instead teaming up with him to set things right for the world of man, before Malcolm disappears forever. 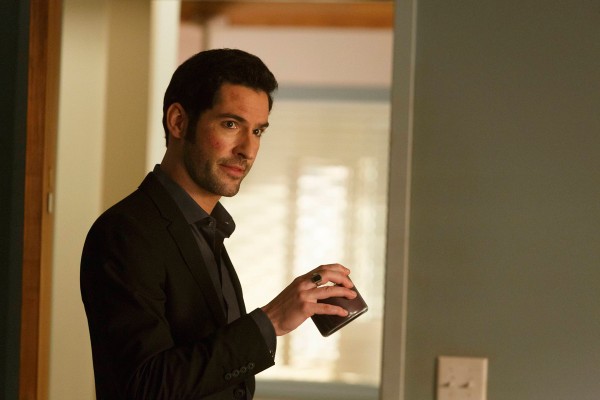 Meanwhile, Chloe is also pursuing Malcolm for her own reasons, though before that, she has the sorry duty of having to arrest Lucifer, which is how last week’s episode ended. Despite Amenadiel bailing Lucifer out, and Chloe having to make a small effort to track down her policing consultant, she soon after admits to Dan that she knows Lucifer is innocent, since the pattern of the preacher’s death doesn’t match Lucifer’s passionate personality. The evidence points to Lucifer, but the show just kind of disregards that, no doubt because there’s no room in a season finale that is already stuffed with tasks in terms of wrapping up the season on a satisfying note.

We also didn’t ultimately get any answers as to how or why Chloe makes Lucifer vulnerable, just that she does. Surprisingly, Dan and Linda end up meeting with the newly-aligned Lucifer and Amenadiel first, with Amenadiel having to fess up to Linda that he’s not a real doctor, though amazingly, Linda doesn’t seem to catch on to Amenadiel and Lucifer having a divine side. I suppose that’s a good thing. Beyond this funny exchange between the three, where Linda inadvertently gives them a clue to where Malcolm might be, this is the last we see of Linda this season. That’s alright though, since she’ll no doubt be back for plenty more weird humour in Season Two.

After harassing a fake ID specialist, Lucifer and Amenadiel then have to face a whole squad of goons, who are obviously unaware that they’re facing divine opponents. This was one of the season finale’s coolest scenes, especially since Lucifer and Amenadiel have spent this entire season at each other’s throats before this moment. Even Lucifer himself comments that he can’t remember why he spent so much time bickering with his brother, when the two clearly fight so well together. Granted, Lucifer and Amenadiel also formed an uneasy alliance in, “Wingman” a few episodes back, but this one seems to be even better! 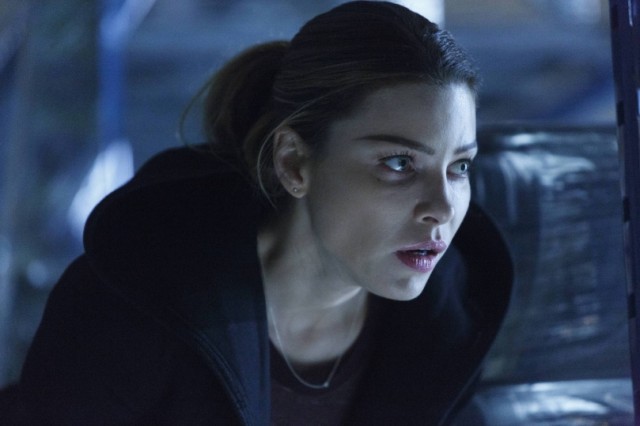 Chloe, meanwhile, is forced to team up with Maze, who admits to disliking her, though concedes that she has the common goal of bringing Lucifer back. After briefly getting shot at by Malcolm’s wife, who believed that the two women were her deranged husband at first, the wife says that Malcolm has developed an insatiable appetite for hedonism and violence, even spending all the family money on stuff that they obviously can’t afford. It’s enough to have Chloe go back to the police station, where she runs into Lucifer again, though finds herself unable to rely on him. Why? Because she gets a call from Malcolm, who has taken Trixie hostage! If Chloe shows up with anyone, especially Lucifer, then Trixie dies. That’s not good.

Dan is also out for the rest of the season finale here, as he decides to turn himself in for handing over the firearm from evidence that Malcolm ultimately used to kill the preacher. Even Lucifer must admit that he respects the courage of Dan here, even briefly dropping Dan’s insulting, “Detective Douche” moniker, and actually calling him, “Detective Espinoza” for the first time all season. The maturity and respect doesn’t last long though, as Lucifer soon follows Chloe, after playing with a police van of course, and here, we get our setup for the season’s big climax.

Despite Lucifer attempting to talk Malcolm down, Lucifer ends up shot, and seemingly killed, as Chloe manages to send Trixie away, but is forced to flee the crazed Malcolm. This offers us our first glimpse of Hell on this series, or at least the gates of it, which has a cool, decrepit sort of design, and interestingly avoids the traditional fire-and-brimstone depictions of Hell in popular culture. This also leads to another big moment of clarity from Lucifer, who prays to God as he departs, saying that he will do whatever his father asks, so long as Chloe is safe. After a short while wandering in Hell, Lucifer is then resurrected, though not before discovering an open gate. That obviously can’t be good, though there are bigger matters to tend to. 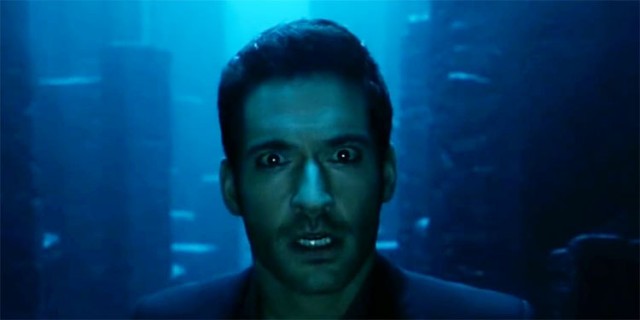 While Lucifer is, “Dead”, Amenadiel ends up stabbed by a Devil’s Dagger, which Malcolm stole and hid (nicely explaining why only one dagger was found in the evidence from Lux), and needs to be taken away by Maze. This leads to a great scene of Maze having to use the one remaining angel feather that she saved from Lucifer’s wings in order to heal the mortally wounded Amenadiel, and realizing that she could very well be in love with Amenadiel. Meanwhile, Lucifer manages to corner Malcolm again, though Chloe shoots and mortally wounds Malcolm before he can do anything. As Malcolm dies, Lucifer taunts him with the Pentecostal Coin, saying that he used it to get back to Earth, and that leaves Malcolm with no way to escape Hell now. While this was effective just desserts for this deadly villain, the whole element of Lucifer somehow grabbing and using the coin, yet also being rescued by God, who signs off on his new purpose punishing criminals on Earth, was rather muddled and confusing. The episode didn’t totally do a good job of explaining just how Lucifer came back in the end, or when exactly he got the coin back, though like I said, it’s tough to care for long, since Malcolm’s end was fitting and memorable.

Things wind down with Lucifer returning to Amenadiel’s side, and telling him about the opened door at the gates of Hell, revealing that a soul has escaped, and not just any soul. In the final seconds of the season finale, Lucifer tells Amenadiel that God has revealed to him that the escaped soul is none other than their mysterious mother! Who could this be?! Obviously, she’s bad news, as even the fearless Lucifer stands terrified of her upon the very mention of her escape. This makes for an exciting cliffhanger for fans to think on as Season One ends, and the show goes off the airwaves until the debut of Season Two. 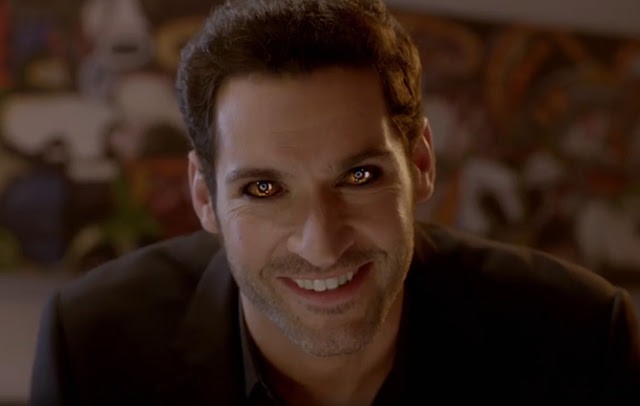 Lucifer generally offered a pretty strong season finale in, “Take Me Back to Hell”, even if the episode’s haste to wrap up the season’s story arcs left a couple of muddled or poorly-resolved elements. Still, the show really seemed to be hitting a great high point by the end of the season, and while this season finale didn’t quite match the excellent final product of the season’s penultimate episode last week, it still turned out very well overall. With Lucifer given approved purpose on Earth by God, just in time for an apparently great evil to run loose on Earth, the show is in a very interesting position in which to kick off its sophomore season, especially since God merely told Lucifer that he can stay on Earth and punish criminals. God never said that Lucifer had to abandon his hedonistic, self-centered ways in the process. Somehow, I can’t see viewers complaining.

Lucifer 1.13: "Take Me Back to Hell" Review
Lucifer closed out its season with a strong season finale this week, even if there were a few hasty resolutions while wrapping things up.
THE GOOD STUFF
THE NOT-SO-GOOD STUFF
2016-04-26
84%Overall Score
Reader Rating: (1 Vote)
100%