After frequent rumblings that Marvel was looking to add The Punisher to its darker array of leading heroes on Netflix, both Marvel and Netflix have finally made it official as of today! Marvel’s The Punisher is a go at Netflix, with Marvel Television head, Jeph Loeb citing the huge fan demand for more of the character’s new Marvel Cinematic Universe incarnation as the catalyst for the green light, though the show currently lacks a production timetable, as well as a release date for its debut season. 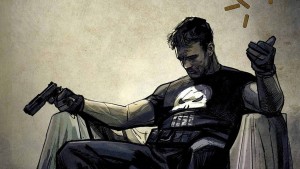 Jon Bernthal debuted the Marvel Cinematic Universe rendition of Frank Castle, the unstable, vengeful and ultra-violent Marvel vigilante that would go on to adopt the mantle of The Punisher, during this year’s second season of sibling MCU Netflix series, Daredevil. Marvel and Netflix confirmed that Bernthal will reprise his role for the upcoming series, which will continue the vendetta of Frank Castle, as he fully embraces his bloodthirsty new identity as The Punisher. Specific plot details, and potential villains for the series, are currently unknown.

The Punisher has also already found a showrunner, in Steve Lightfoot, who most recently served as a writer for NBC’s short-lived, but beloved serial killer-themed series, Hannibal. This may suggest that Marvel and Netflix are looking to fast-track The Punisher for the world’s biggest streaming service as soon as they can, especially after the lengthy hunt for a showrunner for next year’s Marvel/Netflix collaborative series, Iron Fist, which has now begun filming. Even then though, it’s likely that The Punisher won’t debut until after crossover miniseries, The Defenders, which also apparently begins production this year, as claimed by Daredevil star, Charlie Cox.

Sadly, Marvel and Netflix were both mum on the prospects of a third season for Daredevil, which has yet to be officially renewed, despite more overwhelmingly positive feedback toward the show’s recent second season. We also were very much in love with Daredevil’s second season, awarding it an outstanding 95% overall score, where we praised its action sequences, morally grey character drama, and compelling cast and storylines.

Keep targeting Eggplante for all major news and updates on The Punisher, and other big developments with Marvel’s Netflix shows.